Sean Mockler went home with two Gold medals on June 25 earning a victory in the Men's U23 Weight for Height (35lbs) with a score of 5.00m 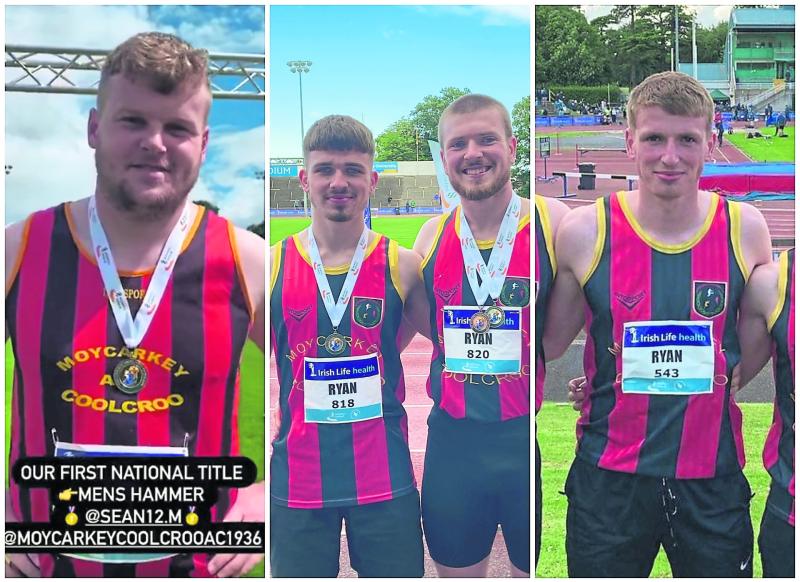 It was also a very good day for the Ryan Brothers in Dublin with a Bronze medal for Daniel in the Long Jump competition in a new Personal Best of 7.24m, his younger brother Dillon also jumped well for 7th place in 7.00m just 0.08 off his PB the two brothers combined efforts won them an All Ireland Silver in the Team Long jump competition Great Stuff, Their brother David also gave a valiant effort in Heat 3 of the Mens 400m finishing in 3rd place in 48.81 just narrowly missing out on making the final. Well done Daniel, Dillon and David.

Road Running Results
Paddy Wins Dave Fogarty race: Paddy Cummins came away the victor at the Dave Fogarty Memorial 4 Miler on Thursday June 23rd in Thurles Crokes having a strong run in a time of 22:07. John Fogarty also ran well to finish inside the top 10 with a 7th place finish in 24:07, Well done to both.

Kildare 5k:The club was well represented at the St. Cocoas AC 5k Road Race last Friday June 24th in Kilcock, Co.Kildare. Amongst a large crowd of 486 runners, Tomas Bracken led the black & reds home with another consistent performance in 10th place in 15:13 just 3 secs off his PB. Conor Keating was next home running well in a time of 16:21 with Paul Bowe taking a break from coaching running well in 21:32 Well done lads keep up the good work.

Orla & Tommy Club Fundraiser: Club members Orlaith & Tommy Healy are setting themselves the challenge of completing the Tri-Kingdom Triathlon in Kerry on July 30th All in aid of raising money for the Moycarkey Coolcroo development fund you can help support their cause by donating at gofund.me/e55f1d8b The very best of luck to the father & daughter duo with their training.