Play it again Sam! Double delight in one Tipperary hurling village after weekend 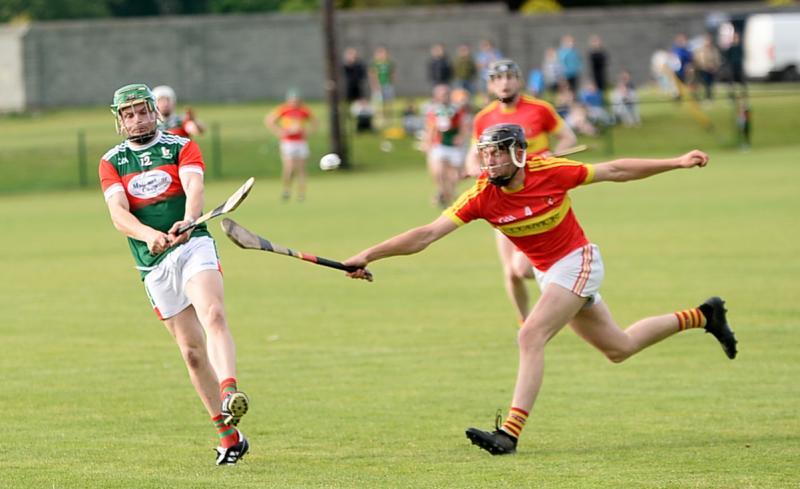 Micheál Dunne (Mullinahone ) gets his shot off under pressure from Joe O'Dwyer (Killenaule) at Páirc na nÉalaí in the South SHC on Saturday evening last.

In 1987 John Leahy became the first Mullinahone hurler in 46 years to represent Tipperary.  He won his place in the All-Ireland Minor Final team that year against Offaly, but defeat was in store for John and Tipp as a top class Offaly team shocked the Tipp lads.  On Sunday last 35 years later the wheel had turned.

For nearly all the game in the new minor final played in Nowlan Park, Kilkenny Offaly were on top and looked like winners.  Tipp lost a player and it looked curtains for them.  Sam Rowan of C.J.K. came on as a sub and as the game entered the 4th minute of added time, Sam was dragged down as he attempted to break through.   He was awarded a free in.  The ball was lobbed in by the free taker androse high on the edge of the square to send the ball to the Offaly net.

From two points down to a point in front, Sam Rowan had helped to make up for the loss suffered by his clubman 35 years previously.

The older people, with longer memories saw it as Mullinahones revenge, though one had to feel sorry for a gallant Offaly team though a game certainly, is never won until the final whistle sounds.  Well done Tipp on a great year of minor hurling and a first minor All-Ireland win since 2016.

The local banners wishing good luck to Sam and Darragh seem to have worked the oracle.

Mullinahone defeated Killenaule in Carrick on Saturday evening by 2-16 to 1-15 in the South Tipp semi-final.  The half time score was CJK 0-10, Killenaule 0-09.

A goal on the restart from Eoin O’Dwyer and another from Mikey O’Shea in the final minutes proved decisive.

It is expected that the team could be somewhat stronger for the final.