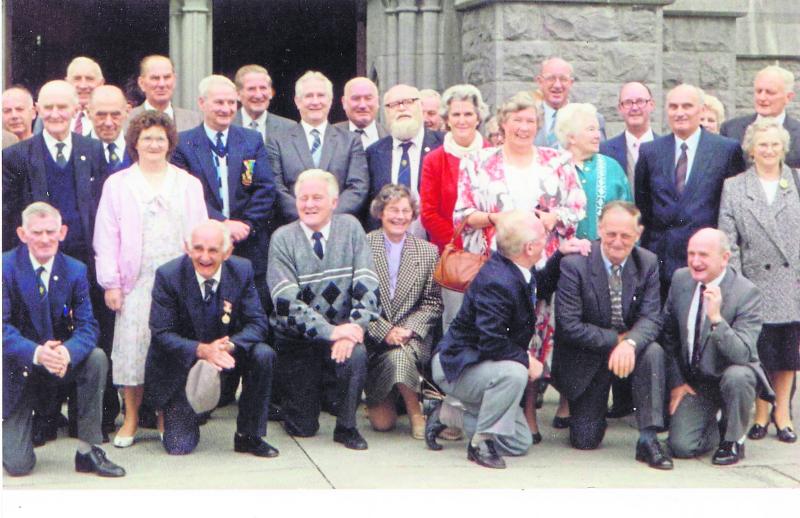 Former members of the 10th. Battalion and friends on their way to Mass during one of their annual re-unions in the 1980's

Now that the month of November is upon us it is fitting that we remember those who served our country during the emergency years (1939- 1945) in particular the old 10th Battalion and Attachments, also the Local Defence Force (LDF).

In anticipation of the declaration of war, Eamon de Valera summoned a meeting of Dail Eireann on the 2nd of September 1939, and informed the deputies that Ireland would remain neutral.

The Dail then declared a State of emergency giving the government extensive powers to deal with any problems that might arise during the war.

With the outbreak of World War 2 on the 3rd of September 1939 Army Headquarters decided to call out reservists and hundreds of young men who were on annual training with the Defence Forces suddenly found they were “virtually” full time soldiers.

It was at this time the formation of the 10th. Battalion took place in Athlone and it was decided to add the word “Uisneacht” after the historic hill 10 miles from Mullingar, hence the name 10th Uisneacht Infantry Battalion and Mc Can Barracks Templemore became the battalions first home.

On the 7th of May 1940 the Irish Government made a “dramatic call to arms” and the local defence force was formed and had a strength of 148,000 men and the strength of the Army stood at 42,000 men. Even though Ireland remained neutral during the war, the army was required to maintain in a constant state of readiness in circumstance where danger of invasion by either Britain or Germany arose.

Though the forces were ill-equipped to stem any invasion and attempts to buy arms in Britain were stemmed by Churchill who seemed to be exacting revenge on de Valera for his declaration of neutrality. In 1941 Mr. de Valera sent Frank Akin, the Minister for Defence to America to buy arms. However, he encountered hostility from the pro British administration of Franklin D Roosevelt which objected to Ireland’s neutral stance and he retuned empty handed. A friend in need is a friend indeed, but in this instance it was a case of “Ireland you’re on your own”. In November 1940 Winston Churchill in a statement in the House of Commons referred to the fact that we denied England the use of our ports and coasts and intimated that if “push came to shove” or words to that effect he would take control of our ports. De Valera replied stating there can no question of handing over our ports and finished his statement by saying, I want to say to our people that we may be facing a great crisis, if we are to face it, then we shall do it, knowing that our cause is right and just and that, if we have to die for it, we shall be dying in a just cause.

De Valera’s statement was the type of leadership and determination that imbued our people with the “Spirit of the Emergency”.

The emergency ended in 1945 and the Battalion stood down in 1946. While some had married locally others returned to civilian life and to their homes throughout Ireland. In the years that followed many emigrated to the U.K., Canada, U.S.A. and Australia. on Saturday, April 22nd 1978, thirty two years after the battalion was stood down, over 200 hundred former comrades gathered at the Templemore Arms for the first of many re-unions.
Across the sod of Europe’s plain the tide of battle rolled
And once again a Nation’s fight in history is told
0ld Eireann called upon its sons to swell the battle line
As they rallied for old Ireland in 1939
From North and South and from East and West they rallied one and all
From hill and dale and winding vale they faced the battle call
They proudly swore from shore to shore their efforts to combine
As they rallied for old Ireland in 1939

Dedicated to the men who served our country during the emergency? While small in number and poorly equipped, they nonetheless “answered the call to arms” and willingly manned the gap of danger.