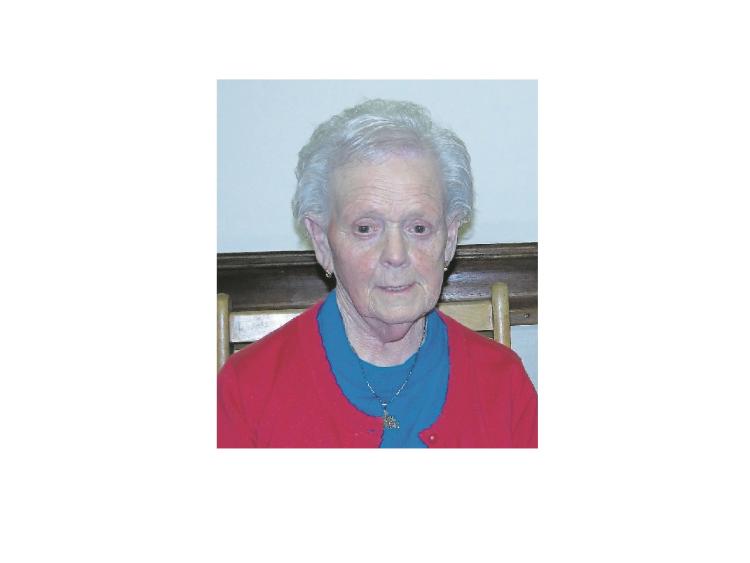 The death occurred of Mary Britton (nee Stapleton) on March 11 in the loving care of the staff of The Hospital of The Assumption.
Mary was born on July 11, 1931 in Loughmore Village. She went to Loughmore School and in 1947, at the age of 16, she travelled to Dublin to work as a nanny. 3 years later, in 1950, she travelled to England with her sister Lill to work for the Christian Brothers. St. Martin was her favourite Saint and while in England she was an agent for the magazine.
While in England she met Templemore man Billy Britton, having known him when she was in Ireland, and in 1955 they got married. Mary then worked in Heinz and in Smiths Industries. She had a large circle of friends both English and Irish.
She was very involved in the Irish clubs and the London Tipperary Association. The highlight for Mary was coming back to Ireland to march in the St. Patrick's Day Parades in Templemore and when the association invited the Templemore Pipe Band back to England on numerous occasions. Mary, along with her colleagues in the Association, always made sure that the Templemore Pipe Band were well looked after.
While Mary and Billy were never blessed with a family of their own, they helped raise their nieces and nephews and were always on hand taking them on trips and spoiling them.
In 1996 Mary and Billy retired to Ireland and built their home in Mary's much loved Loughmore. There they enjoyed their retirement but sadly Billy died in 2003.
Her greatest love was dancing and country and western music. She could be seen stepping it out on the dance floors both in England and Ireland, seeing all the great Irish show-bands in Cricklewood and the Galtymore.
When she returned to Ireland the Monday night Social Dancing in the Templemore Arms, where she was always guaranteed a good waltz, was the highlight of her week.
Mary attended the Day-Care Centre in Templemore, where she enjoyed the facilities, the friendships she made and the trips to the shops and the hairdresser every week.
She spent her last 14 months in the Hospital of The Assumption where she was cared for and loved by all. There she enjoyed daily mass, the music sessions and her bus trips out to Loughmore Cottage for the cuppa.
Mary will be sadly missed by her brother Matthew Paul (England), sisters Nancy (England) and Joan (Canada), Aunt Bridie (Kilkenny), sisters-in-law brother-in-law, nephews, nieces, grandnieces, grandnephews, great-grandnieces, great grandnephews, cousins, relatives and friends.
She was interred in Loughmore Cemetery following her funeral mass, which was concelebrated by Fr. Tomás O'Connell, Msgr. Maurice Dooley and Fr. James Purcell and attended by family and friends and a large number of relatives who travelled from England to say their final farewell.
Mary was a kind and gentle lady who lived a life truly worth living.
‘In the Lord's own house may she dwell for ever and ever’.