Templemore has a new 5 Year Community Action Plan focussed on enhancing the town as a place to live, work, visit and do business in. Initiated and guided by Templemore Community Development Association (TCDA), a group formed four years ago to fill the vacuum created following the abolition of the Town Council, it focuses on three strategic themes:
- Community Action, Sports and Wellbeing
- Tourism and the Local Economy
- Community Assets.
The plan looks at conserving and preserving the history, heritage and legacies of generations past but is equally focussed on the future; looking at what type of town Templemore can become, how it rises to the economic challenges of increased automation and digitisation, and what it has to offer as a location for families to live and work in. The plan is supported by two pillars which will underpin its effectiveness: Planning and Communications; and, Local infrastructure, Transport and Services.
Supported by the TCDA, Dave Ryan, Landscape Architect and his associate, Gearoid Fitzgibbon, Community Planner, developed the plan following extensive research across many groups and individuals in Templemore. It was a community-led process aimed at creating consensus among the local community and volunteers.
The recent launch at the Templemore Arms was very well supported by the community. Dave Ryan spoke about the research and findings which informed the development of the plan and outlined some of the main priorities expressed by the community which included; a vision for the town, refurbishing and repurposing the town hall, communication, Town Park plan, youth, business, infrastructure, environmental issues and volunteerism. He particularly highlighted what he described as the many unique positive aspects of the town such as the park but also stressed the major infrastructure improvements required on the Roscrea approach road. 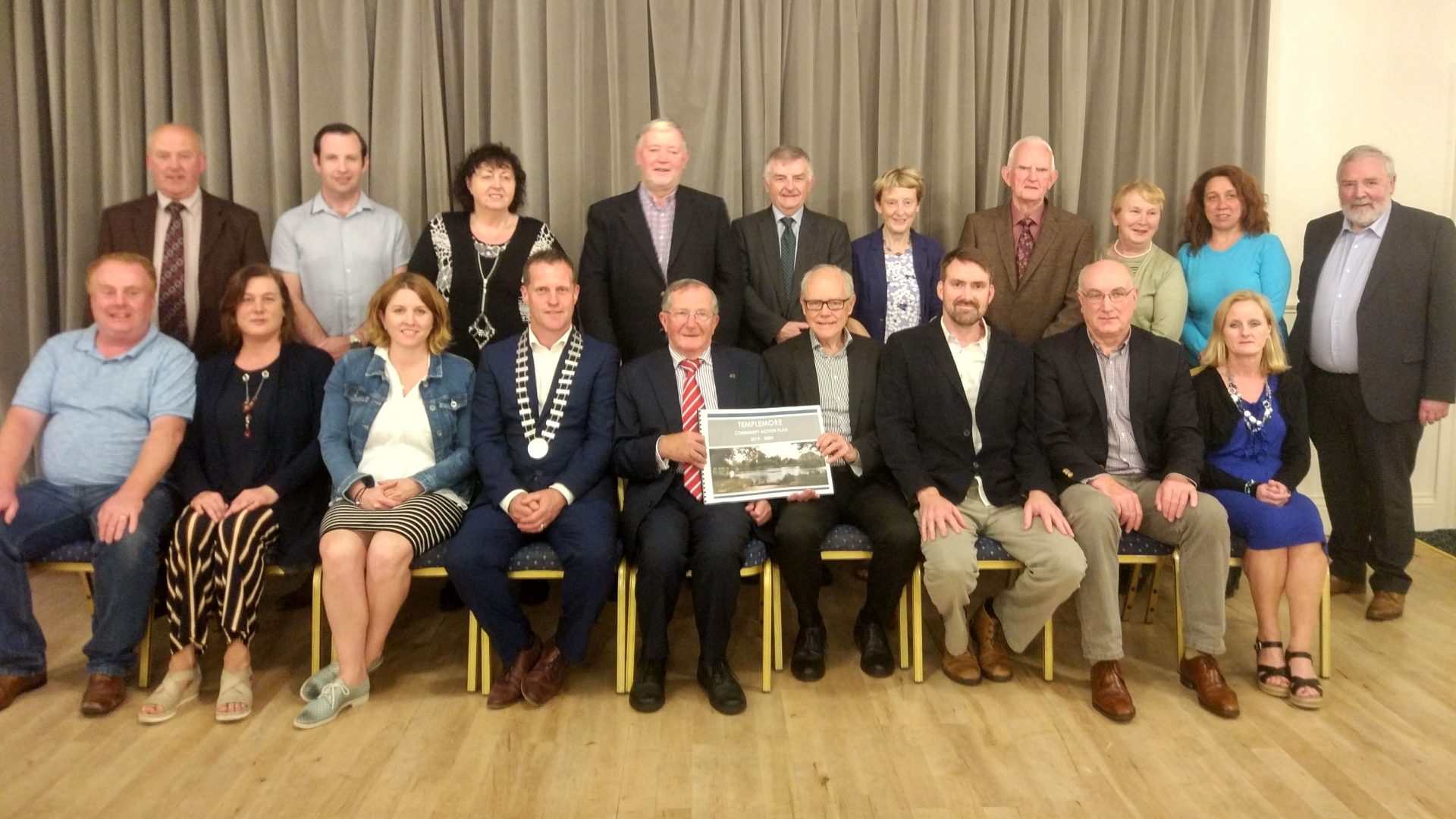 Matt Shortt, Director of the Municipal District said that the work done by the Association in developing the plan was highly appreciated and that the council were progressing a funding application which, if successful, would deliver on the Town Hall improvements sought.
Addressing the launch, Cathaoirleach of Templemore Thurles Municipal District Council, Councillor Michael Smith referred to a number of projects already undertaken by TCDA in partnership or with the support of the council. He offered a meeting between the Council and TCDA to examine the plan and identify what actions could be implemented with support from the Council.
Tom Peters, Chair of TCDA outlined some of the key findings and challenges and highly praised the work of the Consultants and staff of North Tipperary Development Company and members of TCDA. He thanked Matt Shortt and Council staff for their continued support for the work of the association and particularly thanked the local community adding that ‘’local businesses generously supported our ongoing fundraising.’’
The plan was then officially launched by Jim Finn, Chair of North Tipperary Development Company, who congratulated TCDA on the development of the plan and for taking up the challenge of representing the views of the community, adding as words of advice ‘’to ensure the less well off in the community were looked after’’. He also spoke about LEADER funding and mentioned the much reduced funding given to the 2014-2020 programme compared to the previous programme and raised a concern about what level of funding would be allocated to the next programme.
In bringing the launch to a close, Kevin Ludlow, TCDA spoke about the partnerships required to successfully implement the Community Action Plan and added that LEADER funding and the support provided by North Tipperary Development Company, the Municipal District and the local community in its entirety, underpinned the capacity of TCDA to deliver on projects.
The plan will be available for viewing on Templemore.ie. Please do visit the page for ongoing updates on its progress, to share your thoughts, and most importantly get involved.