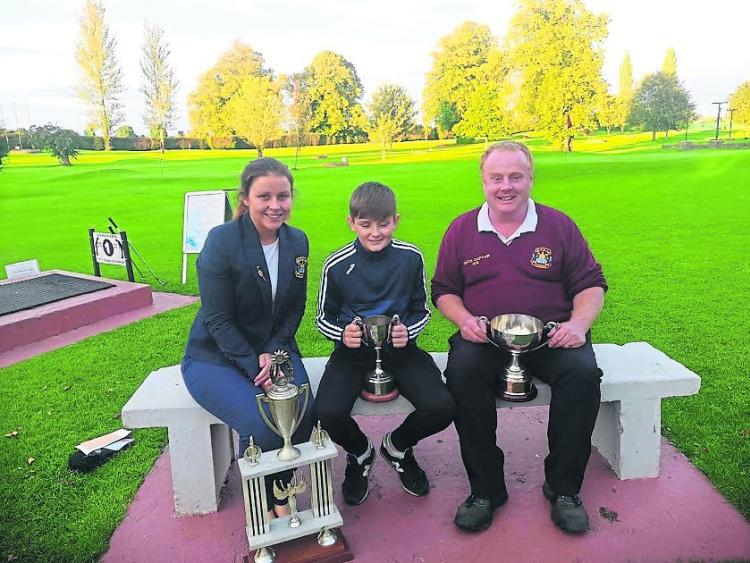 Last Sunday week saw our final competition of the year take place - the much treasured Charlie O'Brien scratch Cup. Despite heavy overnight rain the morning cleared up and conditions were ideal for pitching.
Following the opening 36 holes there was clear daylight at the top of each leaderboard with both Captains in the driving seat. Ronan Loughnane returned a fine score of 12 under par to open up a five shot lead while Lady Captain Martha shot 2 under to lead the Ladies section by seven strokes from Frances Ryan.
The National Ladies Strokeplay champion then gave a masterclass in the final 18 returning a magnificent 7 under par to cruise to the title.
The chasing pack in the gents were all set to hunt Lucy down but two birdies in the opening 5 holes put paid to the dreamers as the PRO landed his third Charlie and in doing so joined John Smith (3), Noel Leahy (3) and Paul O' Brien (10) as the only men in the clubs history to win more than two Charlie's. It was also the first time that the two serving Captains won the Charlie in the same year.
The previous afternoon saw the juvenile Charlie take place. This was a hugely significant event for the club as these kids are so important to the future of the club. Bill Finn, Adam O'Brien and Fiona Burke were in the prizes but it was Kilclareen man Ned Delaney whose name will be etched on the cup for 2019.
We also held the presentations for the Brophy Trophy and the Greys Matchplay and well done to all the winners there.
Our final presentation was to Frances Ryan who won the National Over 55's Intermediate Ladies Strokeplay title. Well done to you. Well deserved.
To our sponsors, Liam and Marie O'Connell, Paul and Breid Brophy and Eamonn Grey we say a massive thanks. You have been so generous and kind to the club over many years and your contributions are invaluable. Long may our friendship continue. Finally a big thanks also to Paddy and John Guider who presented the prizes on behalf of the O'Brien family. Charlie's flame will always burn brightly around Carden's Garden's.