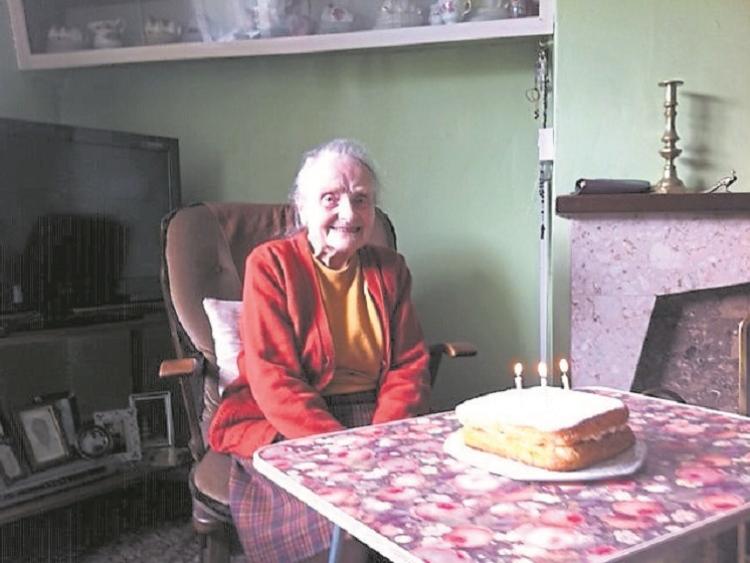 Kitty Lanigan nee Aherne was born in Main Street Templemore in 1924.
She lived in Scotland for a short time as a child before returning home with her father John Aherne, her mother Molly (nee Delahunty) and older brother Sean.
Her father John worked as creamery manager in Loughmore when the family was quite young and that was the abiding childhood memory for Kitty.
On finishing school she trained as a confectioner in Timmy Meagher’s shop in Patrick Street Templemore and her precise attention to detail meant that her Christmas cakes were always beautifully decorated. Her artistic side was also evident in the detailed crochet work that Kitty did as a pastime, and her cotton centre pieces were full of tiny detail that was an absolute art.
The family later moved to live at Manna as her father John and her brother Sean were now delivering goods from the railway station to businesses and farms around the locality which of course meant horses and a donkey (Clebb, Paddy and Mickey Pat!) in the 40’s and 50’s.
Kitty and her parents moved to live in Church Street in the early 50’s, they opened a shop and continued with the business up to the mid 80’s.
She married Mick Lanigan, a well-known postman from Loughmore in 1976. Mick died in 2001 and Kitty continued to live in Church Street up to 3 years ago when her failing health meant she had to go to a nursing home. She was so fortunate to have had the best possible neighbours in Templemore who called to her house every day to make sure she was ok, and who continued to visit her in Villa Marie Nursing Home from 2016 onwards.
A sincere word of thanks to all those who made it possible for Kitty to remain in her own home for so long, as well as to the staff of the Nursing Home who were wonderful in their care for her.
Her remains were interred in Loughmore cemetery.
May she rest in peace.