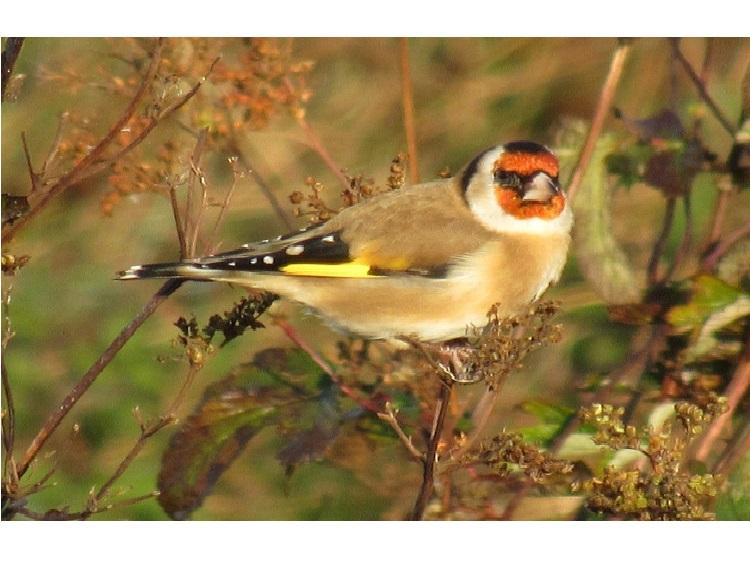 This week our resident bird expert, Michael O'Brien tells us about the beautiful Goldfinch.
The goldfinch is one of the most attractive birds we have in Ireland. Both sexes are similar with very strong colours of bright yellow mixed with black on its back and wings. The head is black/white with a red face. The underparts are buffish brown, a white romp and a black tail. The bright colours on the wings really show when the bird is in flight. Juveniles are duller in colour until they mature.
They feed mainly on seeds, with the purple tops of the big thistle a favourite. In wintertime they will visit garden feeders where they like to eat Sunflower and Niger seed. (These seeds can be purchased in most of the outlets in town).They can often appear in great numbers and once upon a time because of their charming appearance, a flock was called “a charm”. One winter I counted forty three at my own garden feeders. They were once very popular as caged birds and as a result their numbers decreased for many years. Now they are seen in 80% of gardens each winter according to Birdwatch Ireland surveys
Their cup shaped nest consists of twigs, leaves, hair and moss. The female lays 4-6 eggs which are incubated for 12-15 days with the young fledging after a further 12-15 days. The male helps with the feeding. They can have 2-3 broods in a season and stay together as a family for a short while until the juveniles move off to find their own territory. They can be found in the whitethorn ditches around the Pitch & Putt Course and in the ditches around the perimeter of the wood.
In Christian symbolisms the goldfinch sometimes appears in “The Madonna and Child” paintings and because of its liking for the thistle seeds, was often associated with the “Passion of Christ and the Crown of Thorns”. It is also an emblem of ‘fruitfulness, endurance and persistence’.
Patrick Kavanagh the poet in “The Great Hunger” wrote
The goldfinches on the railway paling were worth looking at
A man might imagine then
Himself in Brazil and these birds the birds of Paradise.