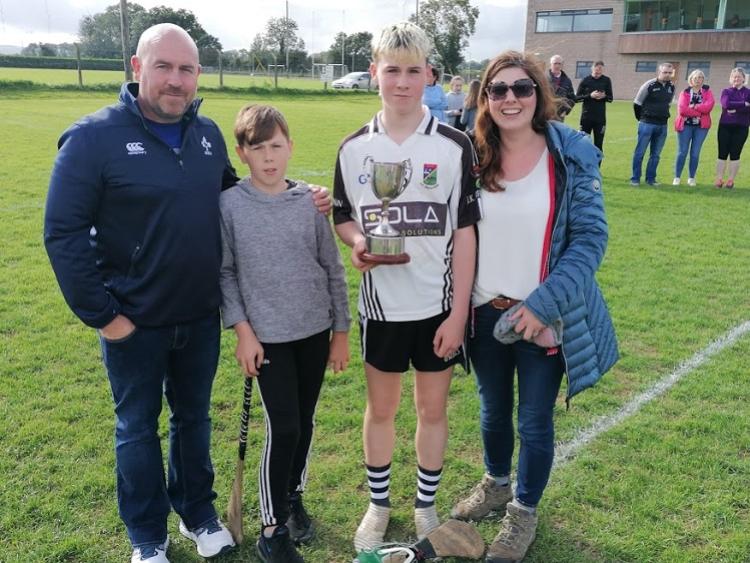 Huge congratulations to our U-14 hurlers who put in a massive display in Holycross on Saturday afternoon last against Durlas Og to capture the Mid U-14 A hurling title for the first time since 2008.

Playing against the strong breeze in the opening half the lads worked very hard and completely outplayed their opponents and raced into an early 0-4 to 0-2 lead with points from Jamie Ormond (3) and a mighty Dylan Quinlan free from 70 metres. All six backs were defending with great heart while the forwards never allowed the Thurles backs to walk out unchallenged. Then a beautiful ball from Kyle Whelan found Jamie Ormond in space and he made no mistake with a sweet finish. And within a minute Bracken's work ethic once again paid dividends as Sean Purcell refused to give up on a ball, eventually whipping it across the goal where Ciaran O'Shea was on hand to billow the net. Another free from Jamie had us nine up (2-5 to 0-2) but Durlas Og were in no mood to lie down. Having already made three great saves Cormac Bourke was eventually beaten by Keith Loughnane who also tacked on two points to close the gap to four before Jamie had the last score of the half. (2-6 to 1-4). Any thoughts of cruising into port on the strong breeze were quickly dispelled as Durlas Og came out spitting fire. Four unanswered points closed the gap to the minimum and they were dominant all over the field. The previous fifteen minutes now read 1-6 to 0-1 and we looked in real trouble. A great point from play from Jamie steadied the ship before a slip from Dylan Skehan in the Reds net gifted the ball to Ciaran O'Shea who tucked away his second goal to give Brackens some much needed breathing space. (3-7 to 1-8). Another Thurles point closed the gap to four before a Jamie free put it back out to five. Cormac Bourke made three more great saves before sub Leelan O'Donoghue finally got one past him to leave just two in it in injury time. It was heart stopping stuff at this stage and just when we needed a score up stepped Kyle Whelan to fire over a great point. Two more frees into the heart of the mixer were repelled by some more great defending before Tom McGrath's whistle finally ended our twelve year wait for glory.

Well done to all involved on a magnificent display both on and off the field. Brackens showed great calm when it was needed most and this display will give them great heart as they head into the county series. The same two teams lock horns again this Saturday in the U-12 A final. Best of luck boys. See jkbrackens gaa.com for fixture details.