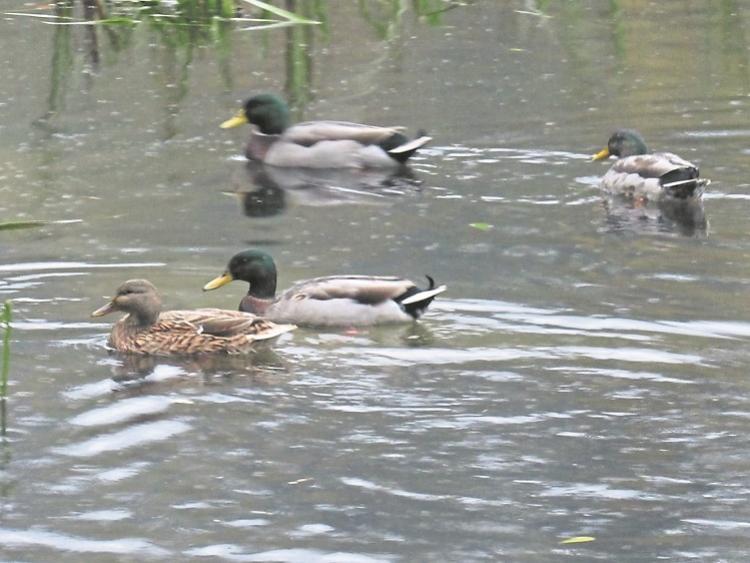 Mallard, Anas platyrhynchos, Lacha Fhiáin
The mallard is the origin of almost all domestic ducks with several different breeds developed throughout the centuries. It is the most common wild duck in Ireland and in the Town Park.
The male (drake) is the most handsome with his bottle green head and neck and yellow bill. The neck is separated from the body by a white ring. The body itself is a mix of grey and dark brown feathers with a flash of white on the wing and tail.
The female is a brownish colour with no green neck or white ring. Other female ducks are similar in colour and therefore can be hard to determine their species. This is nature’s way of camouflaging the female when she sits on the nest.
The young ducklings are a mix of yellow and black when born and similar to the female as they mature. Now and again an all-white one will appear in a clutch, but they don’t survive very long as predators spot them too easily.
Mature ducks can be seen in flocks and also in pairs on the lake in the Town Park. Sometimes they move on to the grass to dry off and feed on the grass. At this stage they are vulnerable to predators especially dogs off the leash. The lake is a wonderful amenity to have on our doorstep. It can make for a lovely family walk on a Sunday afternoon or any day for that matter. So please keep your dogs on the leash.
Mating is a difficult time for the female as she can be followed by a pack of males picking at her neck and jumping onto her back hoping to be the one to mate. They are not fussy where they mate, be it on land or water as long as they are successful.
The nest is built by the female and consists of leaves, dried grasses and down (soft feather) which is plucked from her own chest. She can lay 8 to 14 eggs which will be incubated for 25-30 days. The young will stay on the nest for only a matter of hours until they dry off and get used to their legs, then the mother will lead them to water. Hence the old saying “like a duck to water”.
There is nothing more exciting than to watch the proud mother lead her brood to water. They will not hesitate at the water’s edge but go straight in and swim. The male stays near the nest until all eggs are hatched. He will then join other males and laze about, or follow an unfortunate unattached female.
If you should come across a nest at breeding time and it appears abandoned it may be that the female has not finished laying her eggs, so it is best to leave it alone.
Ducks do not roost like other birds because with their webbed feet they cannot grip what they are standing on. They can stand on a wide stump or bow of a tree to preen and dry off.
Preening is very important as they must keep their feathers smooth and waterproof. They do this by spreading an oily wax substance found in a special gland near the tail. They sleep at night on the water and are alerted by a change in the ripples if a predator approaches and so can avert danger.
The mortality rate is very high among the young ducklings and mothers. I have seen entire clutches wiped out in a matter of days. There is always the exception though, because this year I observed two clutches (one of five and the other of nine) survive entirely. Great credit is due to the mothers for keeping them out of harm’s way.
There is danger on the water too from predators such as pike and otter and of course dogs. Generally, life expectancy is about three years but ducks have been known to live up to twenty years. The local gun club replenish stocks every few years. This is good practice as it helps with the mating process and keeps the species healthy. We also get visits from migrating ducks as they move from one area to another.

Myths & Legends
One traditional belief was that it was not lucky to hunt wild duck at night because they carried the souls of the dead.
Fionn MacCumhaill’s first task as a young boy was to hunt and kill a wild duck. The duck has many resources for evading capture. It can fly, run, and swim over and under water. It is a symbol of adaptability, guidance and resourcefulness.