Down memory lane - a look back to 1972 in Templemore 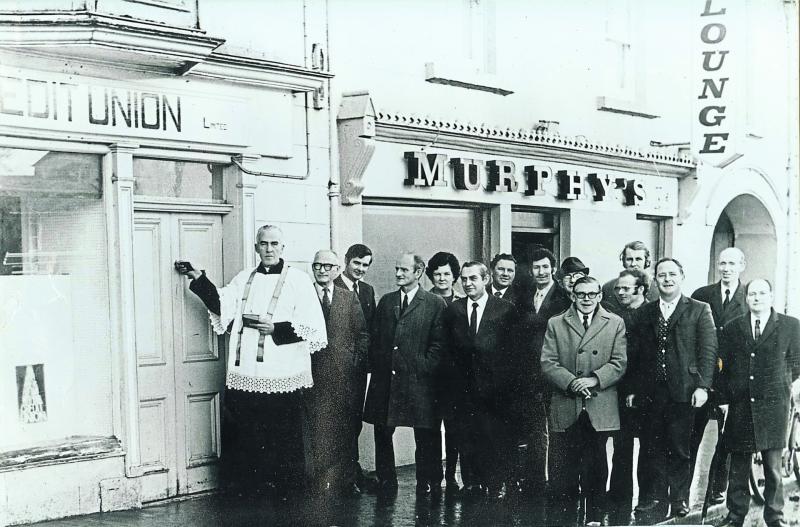 At the opening and blessing of Templemore Credit Union

This week we look back at what was making the news in Templemore in 1972.

The events in Derry on Sunday week last were marked in Templemore when workers in local industries paraded through the streets on Monday afternoon last. Placards were carried denouncing the activities of the British Forces in Northern Ireland.
Comhaltas

Mr. Paddy Barry of Templemore Branch of Comhaltas Ceolteoiri na hEireann has been elected as vice-chairman of Tipperary CCE.

With a capacity attendance at a most enjoyable function, the New Hall in Clonmore opened on Friday night of last week. Patrons dined, danced and were merry at a very successful function which was a tribute to community effort. The Hall will serve a long-felt need in the area as a parochial and functions centre.

After competing for three years in the Ossory Diocesan Snooker League, with special permission from the Ossory Diocesan Authorities, a team from the Templemore Parochial Centre has captured the Championship title by defeating Durrow “A” team in the final at Rathdowney C.Y.M.S Hall.

The winning Templemore team was Liam Kelly, John Rush, M. Morrissey and Tom Fennell. Great credit is due to the team which has had a most successful year and to the man behind them, Martin Dwan, whose help and enthusiasm has helped considerably in the success.
August

The funeral took place on Monday (August 7) of Loughmore native Jim Ryan who at the time of his death was residing with his daughter Peg at Church Avenue, Templemore. Jim was a surviving member of the Tipperary team which played Dublin in Croke Park in November 1920 – Bloody Sunday. A retired shopkeeper aged 75, Mr. Ryan had been in ailing health for some years.

Speaking at the graveside in Loughmore cemetery County Board Chairman, Seamus O’ Riain, said: “We are leaving here in this holy place the mortal remains of a great man, a great Loughmore man and and a great Tipperary man. He lies here amongst his own people, surrounded by the scenes and homes that he cherished and to which he brought honour and distinction. Here his memory will be held forever green.

The Credit Union, which recently acquired new premises at Main Street, will be open each Friday night at 7.30pm.

Mr. John Carroll, son of Joseph and Mrs. Carroll, Mary St, has obtained an MA degree with honours. John teaches at St, James’ CBS, Dublin and is a past pupil of Templemore CBS.

Eamonn Sheppard, The Mill, and David Barry, Park Road, have been appointed as junior executive officers in the Civil Service, and James Hanley, Lacey Avenue, has taken up a position as clerical officer in the Department of Finance.

Reporting minor accidents were a feature of the papers in years gone by and during 1972 the following reports appeared:
Denis Tierney from Clonmore broke his right ankle following a fall from his bicycle

Tom Kenneally, Templemore, broke his right leg having been hit by a car.

Tom Greed was badly injured in an accidental fall and had to be hospitalised in Nenagh. While in Nenagh his 11-year old nephew, also Tom, was in the bed beside him following a fall in Templemore CBS playground.

First prizewinner of £50 in the Shannonside Region of the Children’s Poster competition based on the “Discover Ireland” slogan of Bord Failte is Michael Burke, Park Road, Templemore, who, along with other successful artists, received his award at a function in the Allied Irish Bank’s main Limerick office.