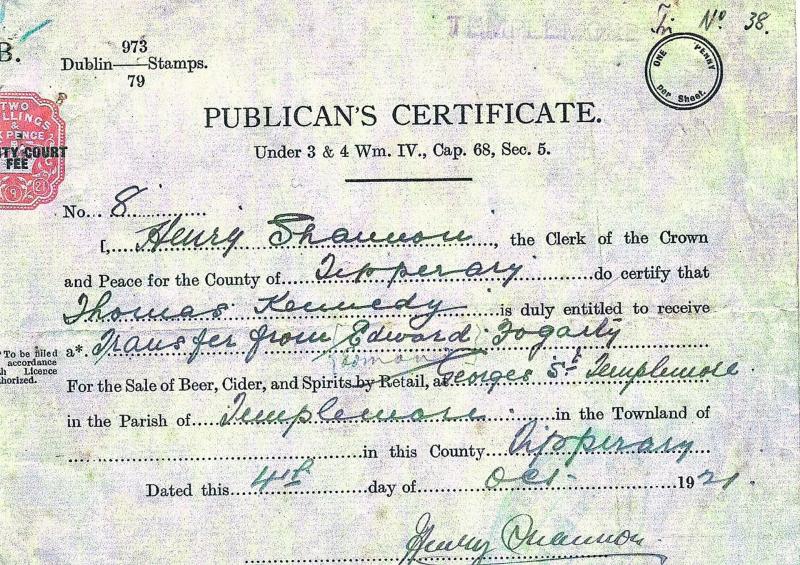 The pub licence for Thomas Kennedy from 100 years ago

Monday next, October 4th will mark 100 years to the day since Thomas Kennedy was granted a publicans licence to trade on George’s Street, Templemore.

Both the licence and the name above the door remain to this day as his grandson Tommy carries on the trade.

Of course the building itself dates way back to the early nineteenth century when the town of Templemore as we know it today was developed by the Carden family.

An entry in a Griffiths Valuation House Book dated May 21st 1846 reads:
“Thomas Kingsmill keeps a hardware, grocery and bakery establishment, He has a lease of two lives of the premises. Wm. Clark has a right of passage through the archway. Situation is good. House built about 29 years”.

Assuming the Griffiths entry is correct, which they generally were, this would date the house at approximately 1817. This ties in nicely with the early development of Templemore as major buildings such as Richmond Barracks (1813) and the Town Hall (1816) were also constructed during this decade.

Indeed many of the buildings in the Town square date from this period which indicate that Templemore was almost certainly a hive of building activity at the time.

There was a resident on Hospital Street in 1807 by the name of Benjamin Whiteacre whose occupation was listed as a painter. An indication perhaps that tradesman were travelling to Templemore where work was plentiful.

Kennedys property as we see it today consisted of three buildings ( 9, 10 & 11 George’s Street) by the time Griffiths Valuation was published for Tipperary in 1853. As you look at the buildings the right hand side was No. 9 ( beside O’Shea’s butchers) where Arthur Richardson ran a cloth warehouse. To the left was James Lanigan ( No. 10 ) who in 1846 was running the local post office from here.

The entrance to this house was through the door to the right hand side of the existing pub door. The pub itself was originally No. 11 but following Kingsmill’s departure it was divided in two and for some time became 11 and 12 George’s Street. Griffiths Valuation shows Margaret Sweeney living in 11 and Robert Mason in 12. The premises eventually reverted back to a single building as once again became No. 11 Patrick St.

Guy’s directory of Munster in 1886 shows a William Ryan running a pub in George’s Street. The cancelled book for Templemore (1882-1892) also shows William Ryan as the occupier of 10 and 11 George’s St. He is leasing these premises from Sir John Carden and is running a public house.

And so a full century later the Kennedy family continue to run the public house that has watered the people of Templemore for over 140 years.