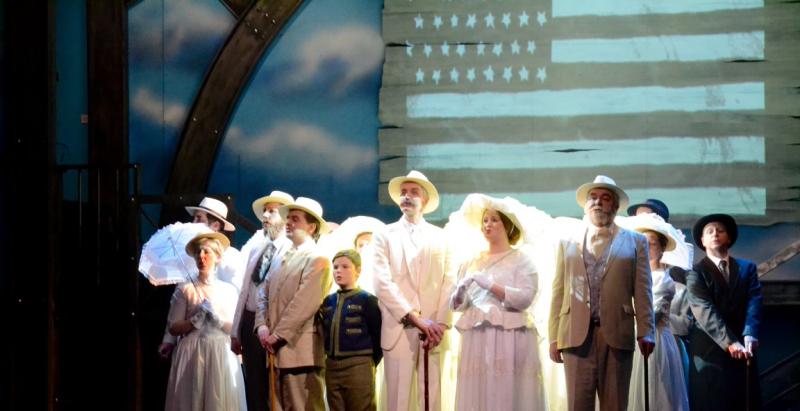 One of the scenes from Ragtime.

Nightly standing ovations greeted a performance for the ages in The Premier Hall.

You wouldn't see the likes of that on the West End'
It was a telling comment from one showgoer as she left The Premier Hall after the Saturday evening production of Thurles Musical Society's Ragtime, which closed to another standing ovation. And, you know it was hard to argue with here. Put simply, this was a theatrical triumph which enthralled audiences for the five night run.
Ragtime was last staged in Thurles fourteen years previously when the European Amateur premiere was featured. And so, there was tremendous excitement when the Society announced that Ragtime would return in 2018. That excitement was well founded and the magnificence of the production created by Christine Scarry as Director, Mary Rose McNally as Musical Director, Lea Carroll as Choreographer, Tommy Sweeney as Stage Manager, Rita Dempsey as Stage Director and Michelle O'Connell as Dance Captain, ensured that audiences were breathless as they left the very appropriately decorated Premier Hall - the Ford Model T outside really adding to the experience.
Of course lighting, costumes, hair and make-up really enhanced the look of this show, which is quite lengthy and required much attention in order to follow the plot. But, there were few difficulties in this department thanks to the sheer excellence of those on stage. The girl on the swing - Danielle Martin leading the chorus as Evelyn Nesbitt.

Thurles Musical Society has been the envy of many other Societies around the country when it comes to their front line. There are so many excellent performers capable of leading the shows and Ragtime gave ample platform for a large selection of those to shine.
From children Harry Keane and Chloe Cahill as Edgar and Little Girl, right down to little Eanna Hayes who came on at the end as Coalhouse and Sarah's son, the children were outstanding - what an opportunity it was for them to showcase their talents in such a blockbusting show.
The children took their inspiration from the adults on stage - all sixty of them. And, with Michael McLoughlin and Marie Therese Kirby as the focal point of the show as Coalhouse Walker Junior and Sarah, the audience was treated to a tour-de-force of singing and acting from this very accomplished duo.
When it comes to acting there are few better than David McElgunn, and as Tateh, who later turns into the Baron, he was outstanding. We are accustomed to seeing him act with supremacy, but his singing and movement in this production were from the top drawer.
Linda Ryan and Barry Derby as Mother and Father were outstanding too, bringing all the traits of frustration, anger, joy, pity, sincerity, patriotism and acceptance to the fore as their complex relationship unfolded on stage. Their interaction with each other and with John Scott as Grandfather and Jack Carolan as Younger Brother introduced one of the many subplots of the show. Jack, a newcomer to TMS, and John Scott an experienced hand, were simply brilliant throughout.
Ciaran Dunphy as Willie Conklin - the villain of the show - is also a newcomer and he was at his sinister, racist, bigot-ridden best as the Irishman who wrecks Coalhouses Model T and sets in train the disasterous consequences of his actions. On the other hand Donal Taylor as Booker T Washington was the cool and calming influence who tried to use words rather than deeds to bring about conflict resolution. The ballgame - one of the most energetic scenes in the show.

Donal and his wife Maria McElgunn, who played Emma Goldman, are long time stage trotters with TMS and their experience was very evident as they graced the stage with real command and presence - a comment which could also be used to describe Danielle Martin as the luscious and flirty Evelyn Nesbitt - a role played by her aunt Trisha last time round, and also Damian Sweeney who made the wonderfully dramatic upside down appearance from the roof of The Premier in a straight jacket as Harry Houdini.
There were also support parts in this huge show for the likes of Frank Tuohy as JP Morgan, Brendan Bailey as Henry Ford, John Hayes as Admiral Peary, Nina Scott as Kathleen, Peter Donnelly as Matthew Henson, Fiona Delaney as Sarah's Friend, Finbarr Shelly as Harry K Thaw, Jonathan Gleeson as Stanford White, and Geraint Fyler as Whitman.
The front line was magnificent, but the chorus stole the show. There was so much for the chorus to do and they did it brilliantly - scenes came to life with ease, as they drifted in and out and gave a vocal masterclass which surely pleased the simply unique Mary Rose McNally who was Chorus Mistress, Musical Director and Conductor, all rolled into one. How fortunate is Thurles to have a lady of her talent and generosity of spirit.
There were many memorable scenes in this musical, but surely the burial at the finale of Act 1 stole the show. It was mind blowingly powerful and left the audience wanting more after the interval.
Thurles Musical Society can take a well deserved collective bow for bringing such excellence to the stage. It's as we have come to expect from them, but should never be taken for granted.
Congratulations one and all on giving a musical theatre masterclass. Following this will be another big challenge.