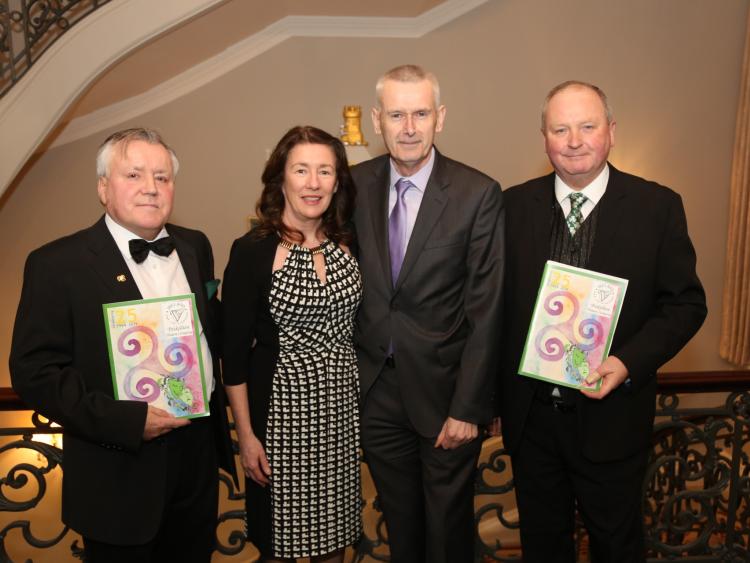 Gerry Molumby (left) receiving his award at the London embassy

Congratulations to Gerry on his many great achievements over the decades.

Thurles man Gerry Molumby, son of the late Michael and Maura Molumby, was honoured by the London Embassy to Ireland recently following 25 years of service to the arts through his performance company Triskellion.

Gerry has been living in Britain now for over forty years and has worked in health and social care in London and latterly Nottinghamshire Derbyshire.
His passion outside of work has been producing and directing Irish Theatre and concerts all over Britain.
Triskellion Theatre Company, was founded by Gerry in 1994 and to celebrate the occasion, Ireland's Ambassador to the UK, Adrian O'Neill and his wife Aisling, hosted an event at the Embassy of Ireland. Over the 25 years Gerry has worked with his London-based friend Patrick O'Connell OBE. 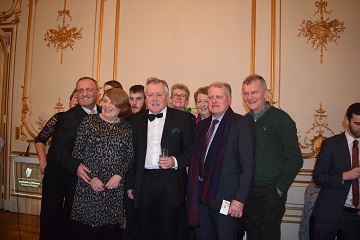 Gerry Molumby pictured with members of his family who traveled from Ireland to attend the function at the London Embassy.

This successful partnership has presented numerous plays by J. B. Keane, Sean O'Casey, John Millington Synge, Brendan Behan and Brian Friel. The Company have also contributed to many Irish Festivals in the UK under the banner of 'Celtic Strands' and have long associations with John Nolan at the Crawley Irish Festival and the Irish Rambling House tours to the UK. They have showcased some of the finest Irish entertainment from Britain's Irish communities, dancers, musicians, actors, and comedians along with some of Ireland's head-line acts including the late Niall Toibin, Philomena Begley, Finbar Furey, Sean Cannon of the Dubliners, Jimmy Cricket and Johnny McEvoy.

Triskellion toured extensively in the UK with 'The Rare Oul Times', a two-act Irish play on the lives of Brendan Behan and Patrick Kavanagh - as well as working with Irish Theatre companies such as Insight Theatre and Hy Breasal from Cellbridge Co. Kildare.

No stranger to Thurles is Ambassador O'Neill, as he spent much of his youth visiting his aunt and uncle Maureen and Garda Sergeant John Haverty. Ambassador O'Neill was General Secretary to President Higgins before his appointment to the Court of St. James London.
Congratulations to Gerry on his great achievements over the decades. He was joined by very proud family members and friends at the reception.