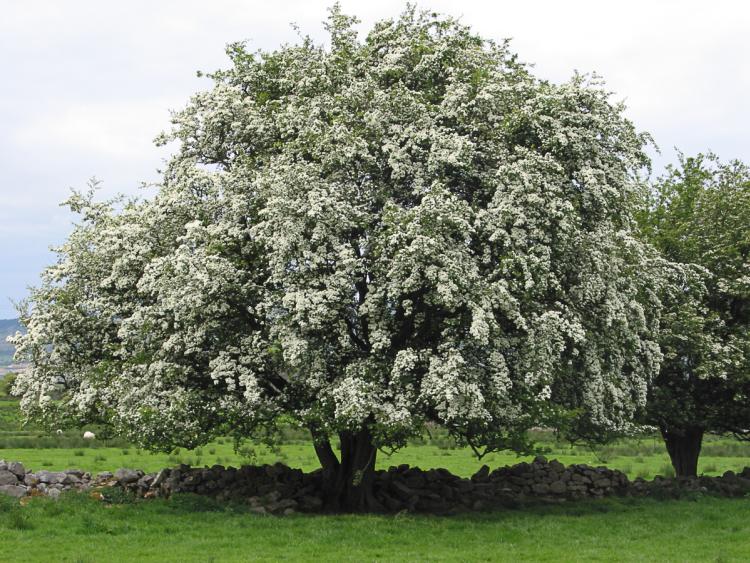 The hawthorn tree with its distinctive flowers

The beautiful hawthorn amongst them

Cocooned or not, there is one ritual that I never miss-on May 1st, at some part of the day, I always listen to Sidney McEwan’s “Bring blossoms the rarest.”

Perhaps it’s a throwback to the importance of the May altar in the primary school classroom of earlier decades but in many ways, this urge to celebrate this special day predates Christianity itself. The early Irish divided the year into a warm summer period-sam(samhradh) and a cold winter period-gam(geimhreadh). In contrast to the Julian or Gregorian calendar, the Celtic year began on Samhain November 1. Although it is a dark period, all social arrangements for the coming year were planned in winter.

This primary division of the year was based on the movement of livestock in transhumance. Winter began when the last animal was brought down from the summer pastures and the crops were all in while summer began on May 1 when livestock was moved away from the growing crops to the hills or other rough pastures like wet meadows. Meat was called winter food while dairy produce was summer food.

The Celtic year did not emphasise the solar cycle, for instance the summer solstice is June 22 but the Irish summer festival of Bealtaine is on May 1.
The year’s round of human activities followed the cycles of growth in several living resources - grain, vegetables, fruit, nuts, cattle, sheep, pigs, bees etc. They busied themselves with the birth of livestock from late January to April and moved the stock uphill in early May, milking them all summer. May 1 might be considered early but the heather and fraughan were more easily nibbled down at this time to condition the pasture for summer-long use. There was also a shortage of fodder by late winter in the lowland settlements and as the cattle got hungry they would destroy the crops if not moved.

In Ireland, it was women and children who stayed with the animals while the men returned to the farmsteads to weed and protect the crops and engage in warfare. It was a time of social anxiety and it was feared that milk would be stolen on May Day by a witch or a hag or a hare that could suckle the cows.

There was a focus on first things such as the first water from the well or the first milk from the dairy but it was a tradition to delay the lighting of a domestic fire as late as possible on May Day.
Standing on the Rock of Cashel and looking across Ardmayle, Boherlahan, the foot of Killough Hill and back into Garryard, a major change in the landscape unfolds.

The May or hawthorn bush is everywhere coming into bloom. Even though the gapped hawthorn hedges, planted with their millions of quicks in the 17th and 18th centuries in the great drive for enclosure have less of an impact now as heretofore as many are flailed to head height, yet the flower of the May lights up the whole landscape. And even though , hawthorn flowers are considered to be the most unlucky of plants and must never be brought into the house, recently it has been shown that a chemical present in the early stages of tissue decay is found in hawthorn blossoms so perhaps an association with the smell of death is the cause of the fear.

The whitethorn is closely associated with holy wells and many have hawthorns present at them. These are associated with saints and in England the Glastonbury thorn is believed to have sprung from the staff of Joseph of Armithea.
The leaves of the hawthorn are indented and longer than they are broad. The foliage is devoured by huge numbers of insects especially caterpillars of various moths.

The trees become smothered in white and occasionally pink flowers. The berries provide a rich splash of colour in autumn and are a vital food source for birds particularly during cold periods. Blackbirds, thrushes, large flocks of redwings and fieldfares are very common.

Birds are essential for the spread of the hawthorn. The seeds have a tough coat which prevents the pip being digested by the bird which eventually drops it some distance from the parent tree.

If hawthorn is unmolested by hedgecutters it can grow to a height of 45 feet. Their natural span of life is about one hundred years. In old age, the trunks become gnarled, twisted and furrowed and constant rubbing by cattle tends to polish them to a glossy sheen.
Hopefully we will be soon out and about to enjoy this magical time of year.
Slán go fóill.