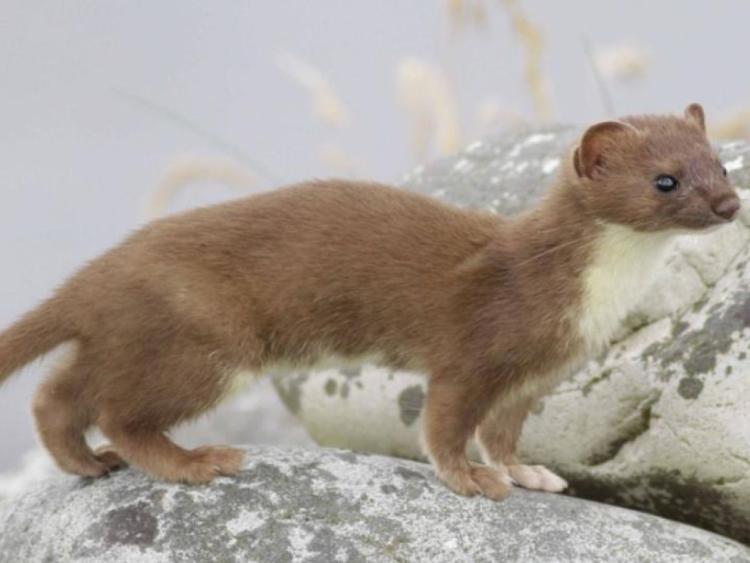 The Irish stoat - not a weasel as is a common error.

The stoat - often referred to as a weasel in common lore, it is characterized by a black tuft of hairs at the end of its tail. There are no weasels in Ireland.

Lockdown is a place populated by memories - and there are so many from Cabragh.

Among my favourites is the mobbing of a sparrowhawk by a flock of blackbirds on the ditch of the Grove field bedside Donnelly’s well on a spring morning of my childhood, the emergence of a number of young barn owls from the owl box in the gathering dusk while behind me in the pond the curved back of the otter rose and fell; the discovery of insect eating butterworts at the edge of the wetlands at Fertiana; a sparrowhawk darting among a flock of thousands of starlings over the open water on an autumn evening but for its rarity and excitement; I choose the demonic dance of an Irish stoat on the pathway around the pond on a quiet summer evening.

Earlier, in the spring, I had stood glued to the spot as a small stoat had lumbered down a short distance on Fertiana Lane carrying a much larger rabbit in its mouth before disappearing into a stone wall a hundred yards away.

The chronicler of the Norman invasion of Ireland and well got with the principal invaders, Gerald of Wales, describes the Irish stoat as, “The little animal has more spirit than body and its courage supplying the deficiency of its strength, with a great heart actuating a slender frame, it is vindictive and relentless in its wrath.”
Often referred to as a weasel in common lore, it is characterized by a black tuft of hairs at the end of its tail. There are no weasels in Ireland.

The stoat is often given the alternate name “ermine” and ermine fur has been highly esteemed since early times. In medieval Europe, fur was a luxury. It was forbidden by the Church to all but the highest ecclesiastics while its use among the laity was severely regulated to favour the aristocracy.

In the reign of Edward III, the wearing of ermine was allowable only to members of the royal family and higher nobility. Sable and marten were similarly restricted, the lower orders having to make do with the skins of rabbits. A man’s social order could be gauged by the amount and nature of the fur he wore. Even today, an earl’s robe is characterized by three bars of ermine and a judge’s ermine is a mark of office.

Nearly every list of mammals compiled for Ireland, whether local or general, gives the stoat as abundant. The reason may be that although stoats hunt at night they are also commonly outside during the day. Compared with foxes, they are much less fearful of man. A stoat which takes cover at human approach will often re-appear if the observer remains still.
There is something uncanny in the lack of fear and it will continue to peep and peer at you through the opening in a stone wall. You can easily tell a stoat from a rat at a distance-the stoat bounds across the road, impressive in its suppleness and sure footed agility whereas a rat scuttles across maintaining an inflexible profile. Stoats ascend trees with ease and they are good swimmers. They are usually solitary and hunt alone.

In the early stages of stalking, they keep to cover but when the quarry is located they are tempted into the open. They follow their prey largely by scent but sight is important when closing with it.
The Irish stoat is almost entirely carnivorous, the food consisting mainly of rabbits, rodents and birds.The stoat’s skull has a short face and a large brain. Its four canine teeth are well developed and its cheek teeth are knife edge ridges and well adapted to slicing flesh. Mammals are dispatched by biting in the neck.There is also a belief that stoats can mesmerise their prey with a type of dance and somersault before striking to kill.In latter years this has been linked to evidence of a brain tumour.

Stoats have been with us a long time. Its remains have been found in a cave in Cork from 35,000 years ago although they have been hunted by gamekeepers from large estates like Curraghmore and by packs of hounds as sport. They are today a protected species.

Apart from wandering down Bóithrín na Smaointe, it is also an opportune time for some reading and with the present crisis being linked to climate change, the title “Out of Wonder” by Nellie McLoughlin is timely-it may inspire you to join this great environmental forum and local discussion groups on zoom.
Stay safe.
Slán go fóill.