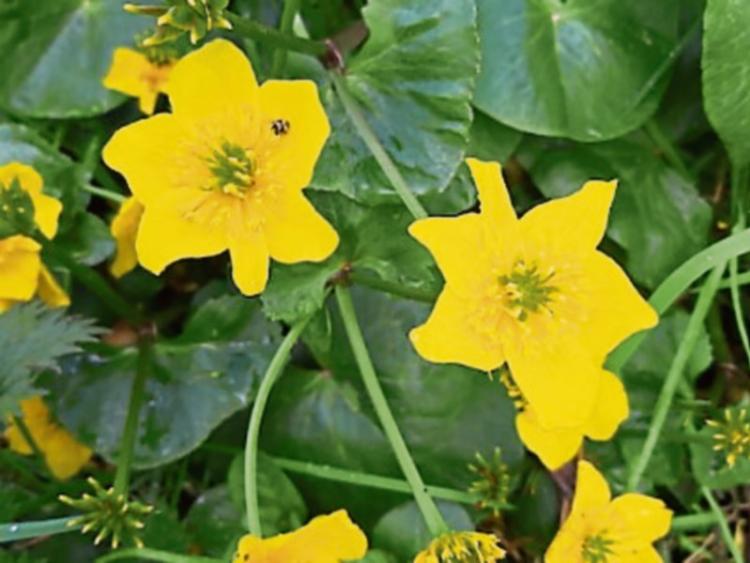 Summer snowflake is a garden escapee and borne by the widespread floods, is to be seen all over the wetland but particularly spectacular in the least visited areas close to the river.

I made it back to Cabragh the other evening on the new 5 Kilometre. dispensation.

With all the whats app photos of glorious moons and sunsets and the burgeoning colour and profuse vegetation of well watered suburban gardens, I had built an image of towering reeds, multi-coloured habitats and reedbed full of the sounds of native and migrant birds. I had forgotten that Cabragh yields its secrets slowly.

The harsh east wind of the preceding weeks, the fact that Cabragh holds onto the water for much longer than the surrounding fields meant that there were no “weeds in wheels growing long and lovely and lush”.

The emerging vegetation was still sparse and even from the bird hide, the open water contained only a few mallard and a pair of remaining teal. So it’s a case of patience and perseverance made a bishop of his reverence. Cabragh will truly bloom later.
Yet my journey was not in vain and here and there different species displayed their beauty across the wetlands.

What caught my eye , apart from the lovely bright green of the emerging reeds, was the white of the summer snowflake and water lily and the yellows of buttercup and marsh marigold while dotted everywhere was the pink tinted cuckoo flower which featured here a few weeks ago.

Summer snowflake is a garden escapee and borne by the widespread floods, is to be seen all over the wetland but particularly spectacular in the least visited areas close to the river.

The buttercups are really at home in damp habitats although their close relation, the tall spearwort, has yet to make its appearance by the wooden path in the centre of the marsh. The famous shine of the buttercup petals derives from grains of starch just below the surface.

Buttercups are an example of how even once widespread plants need protection and are not nearly as common as they were decades ago.
They are avoided by cattle because their sap breaks down to form a toxin but drying destroys the poison and so hay with buttercups is safe to feed to animals. Like clover, they are nitrogen fixing and so were an inbuilt feature of early Norman multifield systems.

In the recent cleaning of the ponds, water lilies were preserved - they were brought here originally by one of our founding members, Willie Gaynor, solas na bhflaitheas dó. We knew them as drowning leaves on the Bleach long ago.
They were beloved of the impressionist artist, Monet, who painted them in all their guises in his garden at Giverny. Their roots were often used in folk medicine to staunch bleeding. Cabragh is a wonderful place for photographers and artists and we look forward to our art classes resuming in the not too distant future.

I was surprised to see the marsh marigold so late in the year but its colour is always so striking. It is very big in folk belief and is linked to May Eve where it was used as a powerful protection against evil influences.
The loose flowers were often strewn on the thresholds and on the floors of houses. It gets its name from its use in Church festivals in the middle ages and is “Mary Gold”.

The naming of plants is a fascinating study. As soon as some sort of writing developed, people began to keep lists of plants , especially those species that had medical interest. Libraries seldom benefit from fires but in 612 B.C. The Babylonians destroyed the Assyrian city of Niniveh and baked 22,000 clay tablets in the process in the library of the king. They were exhumed in the mid 19th century and some were found to consist of herbals.

From aloes to elder, fennel to rosemary, the list includes plants that are familiar still. Astonishingly, many of the tablets were copies of Sumerian texts written two thousand years previously making them almost five thousand years old.
Just as long ago, there lived in China the mythical emperor known as the divine gardener and his work catalogues 365 species of medicinal plants. He experimented with the medical properties of plants by eating them but having survived the first sixty nine, the seventieth killed him!

He is also credited with the discovery of tea and acupuncture. These earliest examples of naming plants mark the enduring wonder and awe we still feel.
Presently on line we have the virtual Bealtaine living earth feastival May 16-24 – a virtual treat.
Stay safe.
Slán go fóill.