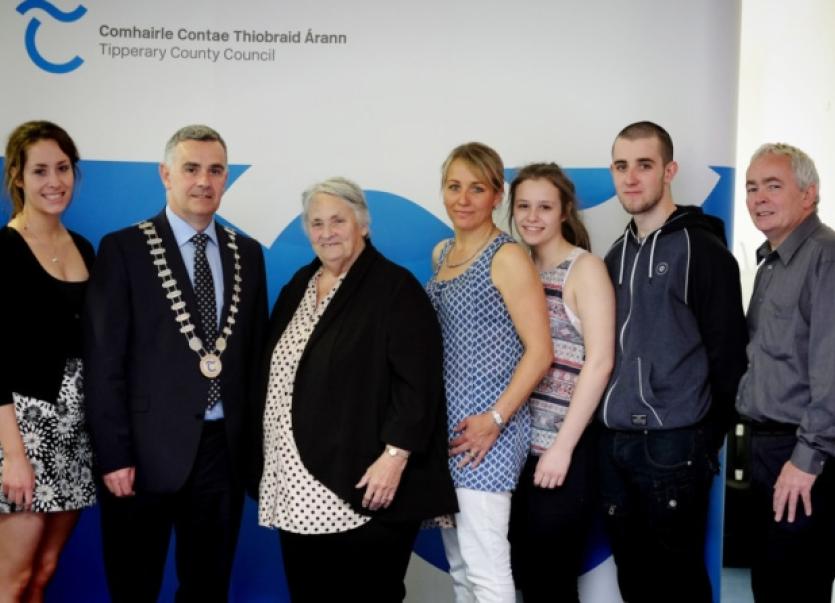 Peg Hanafin (centre) pictured with some members of her family. She will be laid to rest this morning in Holycross.

The award winning author will be buried in her native Holycross following Requiem Mass in the Cathedral of the Assumption, Thurles

Well known Tipperary lady Peg Hanafin will be laid to rest in her native Holycross at lunchtime today following Requiem Mass in the Cathedral of the Assumption, Thurles.

Mourners turned out in their droves last evening at Hugh Ryan's Funeral Home in Slievenamon Road, Thurles to pay their final respect to a lady who had touched so many lives throughout her time on this earth. And, her heartbroken family have been receiving messages of support from all over the country and indeed the globe over the last few days since news of her passing emerged on Monday morning.

The award winning author, who was residing in the Sue Ryder Homes in Holycross,  was a champion of the under privileged and worked for over over half a century with the local conference of the St Vincent de Paul Society where she looked out for and cared for so many people down through the years.

Together with her late husband Seamus, they established an extremely successful furniture business in O'Donovan Rossa Street, Street Thurles - that business is continued on today by their son, Councillor Seamie Hanafin, at Stradavoher Retail Park

Peg was also instrumental is the success of the establishment of Colaiste Eile in Thurles - a second chance, adult education facility which grew from a small acorn into a giant oak tree in the educational sphere.

She wholeheartedly believed in giving everybody a second chance and also believed that education was the key to progression. She herself returned to education gaining a Masters in psychology and made connections all over the world as a result of her many talents. 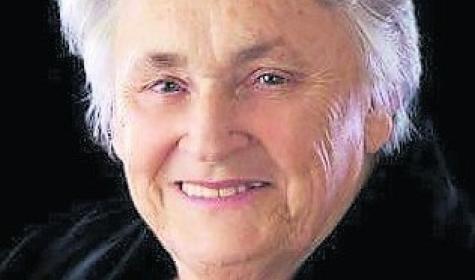 Above: the late Peg Hanafin

Peg and Seamus' home had an open door in O'Donovan Rossa Street and she welcomed prince and pauper alike, with the same big smile, warm greeting and in many cases, assistance to face the next few days. Their generosity knew no bounds and Peg was always of the view that you help out those in need whenever you were privilieged to be in the position to do so. It was a mantra she continued right to the end.

Peg and Seamus moved to reside in Blackwater, County Wexford to allow her to recover from illness and following the passing of her husband and with her own movement restricted due to ill health, Peg took to writing. She had a lifetime of experience to share and she published many articles in a variety of publications including The Tipperary Star, and published a number of best selling books including the likes of Thoughts for Your Journey, I Wish I had Known, The Stuff of Life, and  Getting More Out of Life. Many of these books are being used in second and third level educational institutions across the globe such is their simplicity in conveying vital messages about the 'Stuff of Life'.

So, not only did Peg live a very full life; amass an abundance of wisdom; and work with and have an understanding of systems, agencies, organisations and human frailty; she has left a very tangible legacy through her writing which is there for all to enjoy and benefit from. Only two days before her passing, she completed another book despite her visibly ailing condition - the strength and will power of this remarkable lady was truly incredible.

A lady who was very close to nature having come from the land, Peg had been in failing health for some time and she passed away peacefully in the early hours of Monday morning surrounded by her loving family.

Her passing is mourned by all who had the privilege of knowing her and all those whose lives she touched. When you met Peg, you met a friend for life and were embraced in her huge circle.

Peg was a great communicator and she kept up with all her friends by writing letters, through emails, and through social media. For a lady of her years, she was never afraid to embrace new technology and never afraid to ask for help if she came unstuck. She would take up the cause of those who she felt were being mistreated and never gave up on any of her friends.

Peg never saw failure as a weakness. Instead, she regarded those who failed as having a great opportunity to succeed, thereby growing in strength, experience and getting on with life.

Her passing is deeply regretted in Holycross, Thurles, Tipperary and much further afield.

May this kind, gentle, force of nature, rest peacefully with her husband Seamus, in the company of the God whose commandments they strived to abide by.