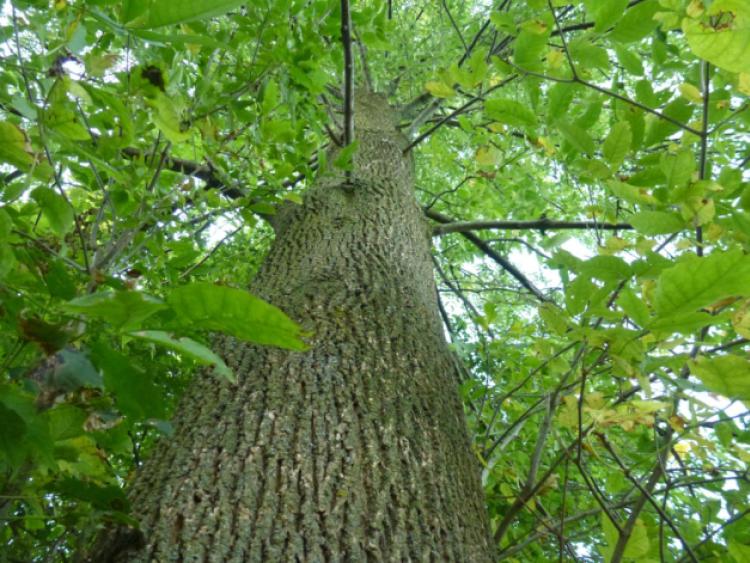 Trees are a part of who we are.

Trees are such a huge part of our cultural heritage.

There were remarkably few trees down in Cabragh after the storm.

I had expected to see broken shards of willow all along the fen carr on the banks of the Killough river and while the reedbed held its winter share of water, from a distance the silver backed willows and indeed the old poplars still swayed in the evening breeze.

Near the hide, the elm, planted by Don Conroy was shredded and had a skeletal look but hopefully it doesn’t mark the return of the deadly Dutch Elm Disease. Most of the trees in Cabragh are by the roadside, in the hedgerow and along the Cosmic Walk and thanks to the work of Philip and Liz Quinn are all named in Irish, English and the language of Linnaeus carved on Irish slate.

Trees are such a huge part of our cultural heritage. Knockavilla, the hill of the inauguration tree where ancient kings were crowned, Derryvilla, an oakwood containing an inauguration tree, today the scene of a thriving Slieveardagh community project, lay beside one of the largest monasteries in Ireland before the monks arrived at nearby Kilcooley and Kilvalure near the Clodagh is still the church of the yew inauguration tree and the burial spot of the owners of Moyaliffe for centuries. The great inauguration tree of the Dal gCais at Kincora on the hill above Killaloe was destroyed in medieval times by the McLoughlins bent on the conquest of Ireland.

Christine Zuchelli has written Trees of Inspiration about famous trees all over Ireland. She retells the story of the otherworld character, Trefuilgnuid Tre Eochair who appeared to St. Fimtan on the day of the crucifixion and handed him a branch which carried nuts, apples and acorns. He planted the berries and from them sprang the five great trees of Ireland, some ash, some oak and others yew. The branches reached to the heavens to communicate with the gods, the trunk was the centre of the world for humans and a place for ceremonial assembly while the roots reaching deep into the earth were a connection with the otherworld of death and the spirits.

A recent book title, The Children of Ash and Elm, a history of the Vikings caught my eye. The Norse believed themselves to be descended from the great tree Yggdrasill and men and women were the children of ash and elm. Even today in Guernica in Spain, the tree under which the elders sat as the bombs rained down in the years before the second world war is revered in front of the present parliament building. A walk in the millennium forest by Glengarra wood shows that perhaps the most attainable method of reaching carbon targets is the planting of deciduous trees.

It is difficult to imagine that Irish wood will not be available to the Irish construction industry soon but an even greater concern, especially here in Tipperary, is the imminent threat to the ash.

Across the midlands and to the east, hedgerow ashes and forest plantations have been scarred by “the single most devastating forest pathogen ever to hit the post glacial woodlands of Ireland.” Since its first discovery in Leitrim in 2012, its airborne spores have had the worst impact on young ash plantations as their leaves wilt and blacken. In 2013, a scheme was devised to help in clearing affected plantations and planting them with alternative species. By 2018, this had cost €5.8 million for more than 1,000 hectares but it stopped when scientists advised that eradication of ash dieback was no longer possible. After widespread damage throughout Europe, the research priority now is finding the small minority of trees that are tolerant of the disease and passing on that tolerance genetically.

Even to identify tolerant trees, we must go to Europe where the presence of the disease is high. Teagasc forestry researchers have access to Irish ash trees growing in six countries and have identified chemicals in the ash that distinguish tolerant trees from those sensitive to dieback-about one to two percent of total trees. This ash breeding programme will need large nurseries to propagate trees by grafting and for production of cuttings for rooting.

We have some new workers with new skill sets starting in Cabragh and we wish them well. We are very appreciative of the very fine well skilled people we have with us at the moment under the direction of Stephanie Durack. Their handiwork is to be seen all over Cabragh Wetlands.