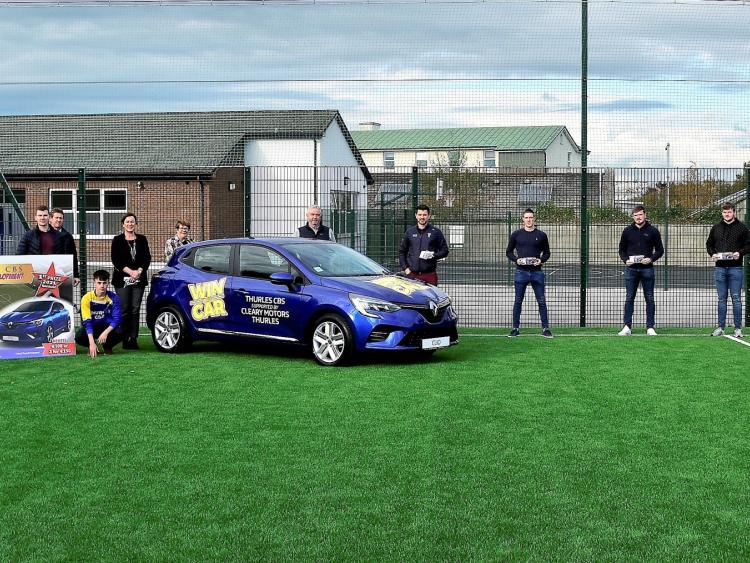 The fundraiser was launched at Thurles CBS this week

Thurles CBS Secondary School has realised a lifelong dream by providing state-of-the-art astro turf facilities on-site with the benefits being immediately evident – now the challenge is on to pay for those facilities which will play a major part in the life of the current and future generations in the CBS.

The school has this week launched an innovative confined draw with 800 tickets to be sold in the coming weeks at a cost of €100 each. And, the school is hoping that past pupils and supporters will reach out to help out, despite the difficult times which currently exist.

The launch was a socially distant compliant one and Principal Kathryn O'Brien was lavish in her praise for the sports team in the school which has driven on the project and brought it to the stage where the facilities are being used all the time – the Harty Cup trained on the astro turf last week and were delighted with it.

“In 2016 we started fundraising for this facility and we have had tremendous support from our Board of Management and our Parents Council, as well as all of the staff members and students. This is for our current pupils and future generations as well. We hope that recent successes on the field will continue long into the future as well,” the Principal said.

Teacher Theo Lloyd paid tribute to the Principal and Deputy Principal, Ollie Kelly, for taking the idea and running with it. “It was a bold project to take on and run with. Remember nothing had been done here by August 1st, but here we are now and it is being used by everyone. There are still a few small things to do and that's why tickets are being sold right now in this draw. A special thank you to our past pupil Pat Cleary of Cleary Motors for his help in getting the car ready. The only thing we have to do now is get the message out there,” he said.

Those in attendance included Tipp hurlers Padraic Maher and Michael Cahill, international athletes Daniel Ryan and Sean Mockler, soccer players Urban Nolan and Tony Galvin, as well as members of the Board of Management, led by Mary O'Dwyer, and the Parents Council.

The development includes the astroturf, which is a multi-sport playing area 55m long, and another small astroturf hurling area with walls. The two handball alleys have been re-opened for play , with a tarmac surface and new fencing - the storage area previously at this location has being moved to a different part of the yard, and there is also a beautiful new outdoor basketball court.

In the rest of the yard there are two tarmac playing areas that can also be used for PE or extracurricular activities.
It is over 4 years ago (2016 Bicentenary) since the CBS started fundraising with the idea of developing an astroturf pitch in the school yard. After many delays they now have a facility to be proud of.

The draw for a brand new 2021 Renault Clio car (or €15,000 cash) in association with Clearys main Renault dealer in Thurles will see tickets sold at €100 each or 3 for €250. The draw will take place in early January and there are also weekends away, golf prizes, TV's and a number of other runner-up prizes.

Tickets can be bought through the school and all support would be greatly appreciated. There will be a facility for people to pay for the tickets through installments and the details of PayPal accounts and numbers will be posted on the school website and social media pages in the coming days.

Footnote: There was special mention of former teacher Charlie O'Loughlin at the launch.  Charlie passed away suddenly last week, and had been a key member of the sports team at Thurles CBS during his years in the school. May he rest in peace.