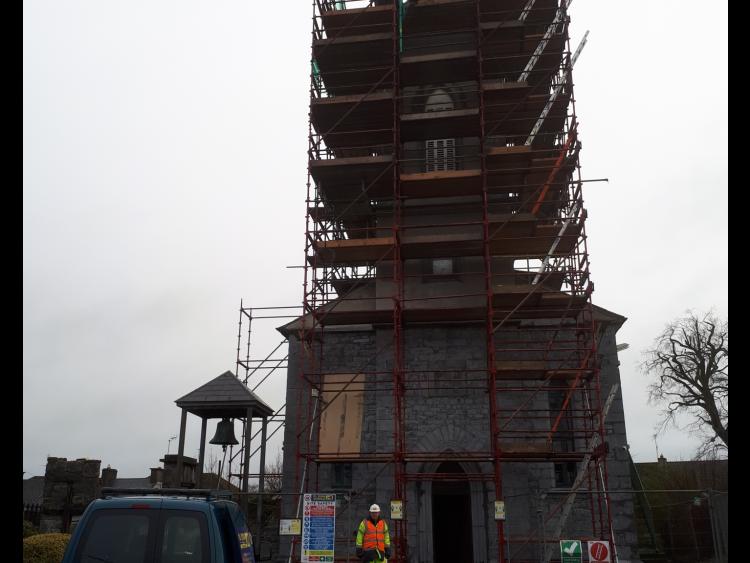 Thw bell tower and roof are being tended to, to prevent water ingress

The work is designed to preserve the building with the roof, windows, dash and seals all being tended to in order to prevent water ingress. Ten flights of scaffolding have been present at the location for a number of weeks now and the hope is that this will come down by the end of December, all going well.

Saint Mary’s stands on the site of a church built by the Anglo-Normans in the 13th century. The present church, built in 1812, is the third church on this site and is the burial place of Lady Elizabeth Matthew, Viscountess of Thurles & Progenitor of the current Royal family.

The building has a beautifully designed stone doorway which remains intact. While the Cathedral of the Assumption stands on the site of a mediaeval Carmelite Friary in Thurles, Saint Mary’s Church, at the end of Saint Mary’s Avenue, stands on site of the pre-Reformation parish church of Thurles.

The original church was built by the Anglo-Normans in the 1292, probably on the site of an earlier church, to provide a parish church.
Later the church was the burial place of Elizabeth Poyntz (1587-1673), Lady Matthew, wife of Thomas Butler (1596-1619), Viscount Thurles and son and heir of Walter Butler 11th Earl of Ormonde. He was drowned off the Skerries Rocks as he was travelling to England. Their children included James Butler (1610-1688), 1st Duke of Ormonde.
As a widow, she lived for a time in the Black Castle in Thurles, and then married George Mathew and they are ancestors of Nano Nagle, the founder of the Presentation Sisters, the Temperance campaigner, Father Theobald Mathew, and the Mathew family, Earls of Llandaff.

The second church on the site was built in 1784-1789, and the third church, the one now being renovated, was built in 1812 with loans from the Board of First Fruits.

The memorials in the church include one depicting the Good Samaritan and designed by Joseph Robinson Kirk (1821-1894). This plaque commemorates Dr William Bradshaw (1830-1861), a Thurles-born surgeon who received the Victoria Cross for courage in combat. He died in Thurles in 1861 while he was on leave, still suffering from the consequences of the Crimean War and his time in India.

PJ Ryan told tipperarylive.ie: “We hope to be finished the work by the end of December or thereabouts. We have replaced the dash with a special lime mixture to prevent dampness and we have also sorted out the roofing problem with re-slating, the flashing, windows and the towers. The four cornice towers were a big worry and we have a lot oof work to ensure that they were properly secured and safe. Thankfully, they are now but we were concerned about the work and had to plan it carefully, ” PJ said.

There are actually five spires on top of the tower - four on each corner reaching 7 ft into the air, and one central spire which is about 30 ft high - steeplejacks have been commissioned to do the restoration work on this section as expertise is required when working at such height.

The Church is 102 ft in height in total and PJ and his team have been working on the building for almost two months, making great progress. It's quite obvious that, being a local man, PJ has great passion for the work and is out to ensure that such buildings are preserved for future generations.

“There's a lot of history in this building and we are delighted to be helping to preserve it for many years to come. This work will ensure that it remains intact because it is an important part of the history of Thurles and of the Church of Ireland faith here,” PJ said.