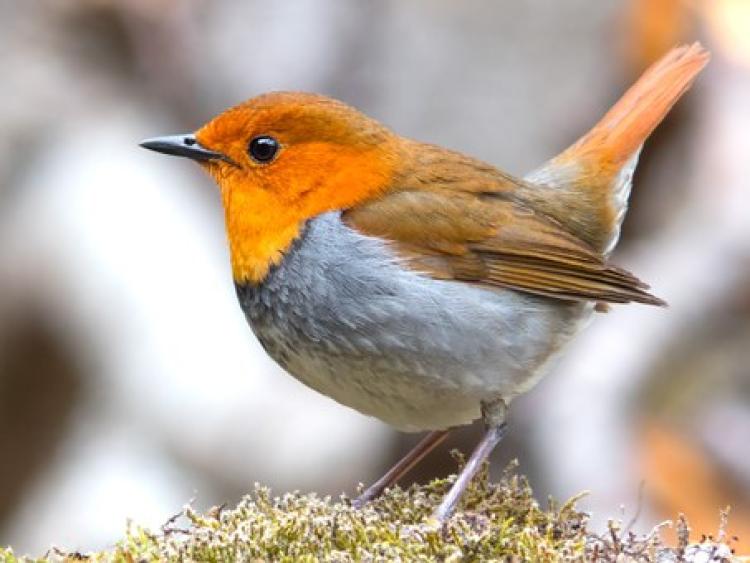 The robin - a regular visitor to our gardens these times

The robin red breast in focus

As the old Irish proverb goes “An rud is annamh is iontach”.

Yes, scarcity, particularly in the world of birds, gains all the plaudits but this week we look at one of the most common, most loved, most visible and most endearing of all birds, the Christmas bird beloved of Christmas card makers and Christmas tree dressers, the Robin.

Common in gardens (the gardeners’ friend) and hedgerow landscape, there are about two million breeding pairs in Ireland, augmented from mid-August to November by an influx of continental robins on migration to south west Europe and north Africa.

The bird has been depicted on Christmas cards since at least the 1860’s, representing the friendly postman whose uniform was a bright red jacket. The robin was portrayed with an envelope in its beak posting greetings into a letter box which was invariably covered in snow and a sprig of holly. Many of those same letterboxes are still to be seen all over the country.

Robins are undeniably appealing-nice shape and demeanour, pleasing orange splodge on face and upper breast. Large liquid eyes which give them excellent vision in the deep shade of the forest where robins forage. They seem to humans to be mild and courteous, somewhat plump, exaggerated by their habit of fluffing up their plumage which in reality is a heat saving mechanism to keep more insulating air between their skin and the cold.

They also seem to bob up and down on their perch which is thought to enable them to judge distance effectively. They routinely come to investigate the gardeners’ progress and take small invertebrates inches from the gardener’s feet. This haste is a throwback to a technique evolved during its history as a forest bird such as following the work of the wild boar or deer as it snaps up tasty titbits immediately.

They come readily to bird tables and can be trained to eat out of hand. Of course, it never stops singing to defend its territory particularly between September and early December. Usually the height of general birdsong occurs in Spring but the robin’s song rings out around the winter solstice with a note of hope in the turning of the year and the road to spring.

Although they appear on snow-covered scenes on Christmas cards, they are very susceptible to cold weather, especially snow. Adults are highly secretive during the nesting season and their nest is usually near the base of a hedge or earthen bank. Nevertheless it is sometimes appropriated by the cuckoo.

The nest is built entirely by the female. A clutch consists of five or six eggs which are incubated by the female for 12-15 days. The male may take over the feeding and care of the brood if a second clutch follows quickly. Robins will fight at the drop of a hat and the male birds are vigorously aggressive in territorial disputes. They are loyal to their territory and do almost all their feeding, courtship and breeding within a prescribed patch.

Of Ireland’s top thirty birds, robins are in top place, being in 99.9% of gardens. Suburban gardens are a wonderful habitat for a wide diversity and large numbers of bird species. Gardens provide a wider diversity of habitats for birds than would otherwise be available in their natural habitat. A good garden for birds will have trees, shrubs for shelter and may even have a small pond-a mini Cabragh Wetlands!

There will be a considerable variety of available food ranging from naturally occurring invertebrates to tree borne fruit and berries to well filled and replenished bird feeders and bird tables. There will be an assortment of nest sites including artificial nest boxes. In well run gardens there will be an absence of pesticides.

Now that we are in mid-winter, it is the best time to position nest boxes so that the birds can get accustomed to them. Remember they are sited away from the direct sun and the prevailing winds.

“A moment in time” available this Wednesday and thereafter is a collection of music, song and story recorded in a socially distanced studio of the Cabragh pipers and fiddlers, the box players and squeeze boxes, sopranoes and tenors, recitations and poems, keyboards and bodhráns, guitars, frivolous and serious from the length and breadth of the country with an excellent bean a’ tí. We hope it brings comfort and solace and not an odd smile of memory for all who set their calendars by the first Tuesday of every month by the water’s edge-definitely a collectors’ item.