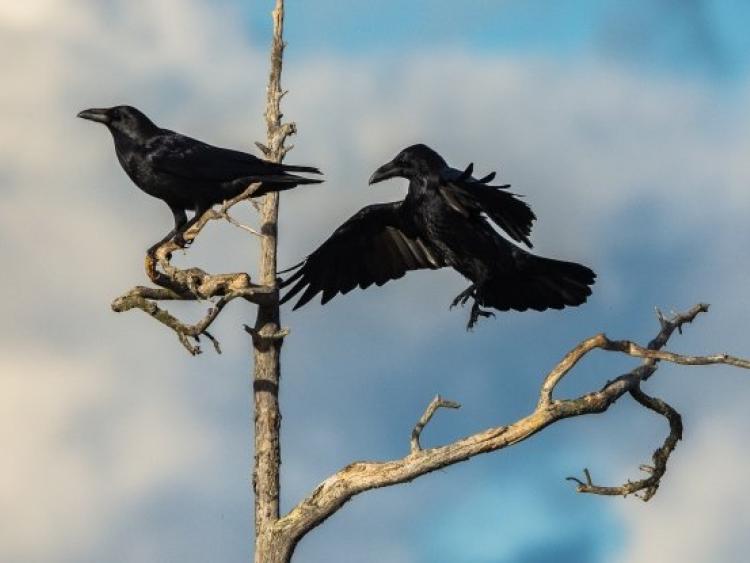 A parliament of crows, or a crows funeral??

Crows have no pity - any sick bird is simply disinherited. New owners move in on the territory of a deceased crow within a couple of hours, sometimes the same afternoon.

There has been a rash of programmes reeling back the years on the television channels over the last few weeks.

“Siar sna seachtóidí” on TG4 caught my attention and it all seemed so different and so long ago. But it was totally different also to the preceding decades.

The life of a young child in the 1950’s was lived almost totally outdoors. When the interminable games of hurling and soccer on the fresh concrete petered out , the adjoining fields, hedgerows, copses, woods, dykes and river beckoned as we gazed across the landscape towards Knox’s wood and the flooded bottoms of the Suir. At some part of the day a great gathering of crows would rise raucously and stay aloft , wheeling and soaring for a considerable period of time-a crows’ funeral we called it or the older people a crows’ parliament.

I could never distinguish between crows, rooks, carrion crows, jackdaws, greybacks, choughs and ravens but the general feeling was one of loathing. It all came back to me as I walked by the gate of the old Glengarriff estate at the top of the town, where in one of the few old groves left from the huge intensification of farming across the Irish landscape, hundreds of crows began to complain loudly in the trees overhead.

On a soft morning last week there was some evidence of nest building but we have a long way to go to those few days of mild February weather when the crows begin nesting. That unyielding back plumage, fierce looks and tendency to harm the weak and sick of other species are probably the basis of this loathing. In ancient times, they would attend the gallows and the overflowing graveyards of the plague. We forget the good work of clearing a field of wireworms and leather jackets, their play or their nests which are architectural marvels. There seems to be so many with 520,000 breeding pairs of rooks scattered throughout the countryside in rookeries of fifty pairs or fewer.

The hooded crow has about 290,000 pairs of highly adaptable and successful birds. They feed on carrion, scavenge rubbish dumps, rob many birds’ eggs and snatch the young. Some large winter roosts have been recorded totalling up to 167 individuals. We may see them as top of the pile but we are mistaken.

It is a life brimful of difficulties and stress. Magpies hate them with passion and both species undertake a mutual campaign of harassment with tensions running high during late winter and spring.

Another unsavoury mutual enmity seethes between terrirtorial carrion crows and the floating population that drifts around in non-breeding flocks. Some birds have land, others gather in resentful gangs. No territorial crow can feel entirely established. If it feels below par, it is under pressure-lose a partner and it is on borrowed time.

Crows have no pity. Any sick bird is simply disinherited. New owners move in on the territory of a deceased crow within a couple of hours, sometimes the same afternoon. They dish out the violence but they receive it back with a vengeance.
Like the wren upstaging the golden eagle in last week’s article, the small fieldfare can overturn the odds. The predator’s eyes must pop at the sight of the birds, eggs and chicks all stacked together as if on a shop counter. An attack could mean the loss of young for the fieldfare and perhaps the waste of a whole breeding season. The field fare does not fly off to distract the crow but remains close to its nest site. All of them begin to call loudly with discordant rattling noises.

This warm welcome of course is expected by predators but then an extraordinary form of predator deterrence is unleashed. A fieldfare flies up, stalls and then swoops down towards the intruder. Letting off a peculiar squealing sound, it carefully aims and delivers a gooey bomb of faeces straight onto the crow’s preened plumage. Immediately a second fieldfare dives and repeats the dose. The next follows seconds later and it continues until the predator departs. The uric acid contained in the bomb can compromise the waterproofing on a bird’s feathers and consign the owner to a slow death. Although this co-ordinated attack only takes place when the chicks or eggs are in the nest, the crow learns once again that “all that glistens is not gold.”

Such stories enrich our appreciation of nature. We can ensure that they continue by planting fresh groves as in Glengariff, valuing wetlands etc. Maybe there’ a new year’s resolution there somewhere.