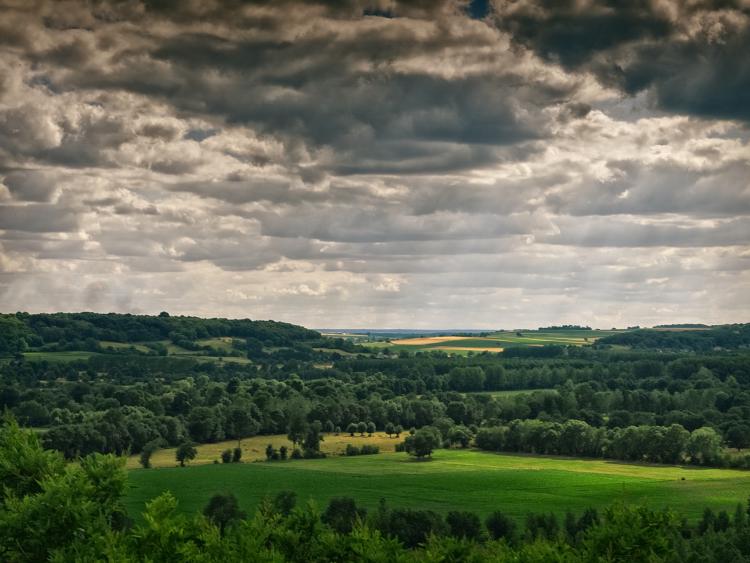 The Irish landscape - a painted picture at every turn

Who painted the great canvas that is the Irish natural landscape?

After the last ice age the canvas was a blank gravel grey board dotted with numerous ice-cold post glacial lakes. On this gravel nothing moved in the icy wind, nothing grew ten thousand years ago. Man was nowhere to be seen but the canvas did not stand alone. Three land bridges connected it to Britain which in turn was connected to Europe.

As soon as the climate warmed and the land bridges collapsed Ireland was left with a reduced palette compared to the continent. In our present climatic era known as the Littletonian warm phase due to the pioneering science of pollination on Littleton Bog, we were left with 815 plants with which to form a masterpiece. It helped of course that man did not arrive until 9,000 years ago as he has been the chief disturber of natural distributions.

So successful was the original artist that oaks were growing in the south of Ireland 9,000 years ago, the wild boar was in Northern Ireland at the same time and the red deer was in the midlands 8,400 years ago. But man introduced new plants and animals to compete with indigenous forms and brought about further change by cutting down forests, draining wetland and removing peat-described by Eamon de Buitléir as akin to ripping the cover off the Book of Kells.

The first response to warming conditions after the last ice age was the development of rich meadows. These were quickly invaded by juniper scrub which in turn gave way to tree willows and then birch giving us our first woodlands. The birch phase lasted about 1,000 years and after that came hazel and pine divided by soil quality.

By eight and a half thousand years ago, oak and elm were beginning to overshadow the hazel on heavy soils with scots pine, ash and alder also present and this climax phase of woodland lasted 1,500 years.

I cannot show you this painting today of endless sheets of trees interrupted only by the water of lakes and rivers-the only real fragment is the Geeragh outside Macroom most of which is submerged beneath the waters of the Lee hydro-electric scheme. The only local fragments of forest remain in our minds through the place name “Doire”, so well illustrated by last week’s correspondent in the Tipperary Star.

To my mind, four outstanding areas of natural beauty around Thurles stare out at me from the canvas. Some have been enhanced by man while being simultaneously impaired. The first is Brittas on the banks of the Suir, a beautiful parkland estate tended lovingly by the late Mabel Langley, suaimhneas síoraí di, over many years. She planted hundreds of thousands of trees and even made tunnels in the moat around the copy of Warwick Castle gatehouse to facilitate kingfishers. Today her work continues but at the same time arterial drainage of the Suir behind the estate and removal of all riparian growth from the banks means that every flood for the nest number of years will result in a silt laden river downstream.

Another great estate that has protected nature over the years is the Killough estate where the O'Meara family have clung to the unique ash and hazel woodland on the limestone scarp despite the encroachment of quarrying that has reduced the height of the hill and put paid to the existence of peregrine falcons which had nested there for generations.

Cabragh wetlands too has evidence of hand cut drains across the reedbed, probably from the period 1745 to 1880’s. Although the wetlands are subject to intense conservation for the last thirty years, the Killough river has been drained right to the gates and now poses a challenge as it carries huge quantities of excess nutrients from nitrogen drenched fields surrounding the area on all sides. This year we hope to look again at the series of man made drains with a view to restoring habitat suitable for lapwing and curlew.

However, the greatest intervention in the natural world in Ireland over the centuries has been the commercial development of peat bogs. Making up a significant percentage of Ireland’s landscape, they are the most valuable natural habitat and also subject to the greatest destruction.

Now, with their closure we can once again have a blank canvas that can take all the modern anxieties of bio-diversity, sustainability, climate change, carbon sump, renewable energy, rewilding etc. Let's use it! Let's get painting!