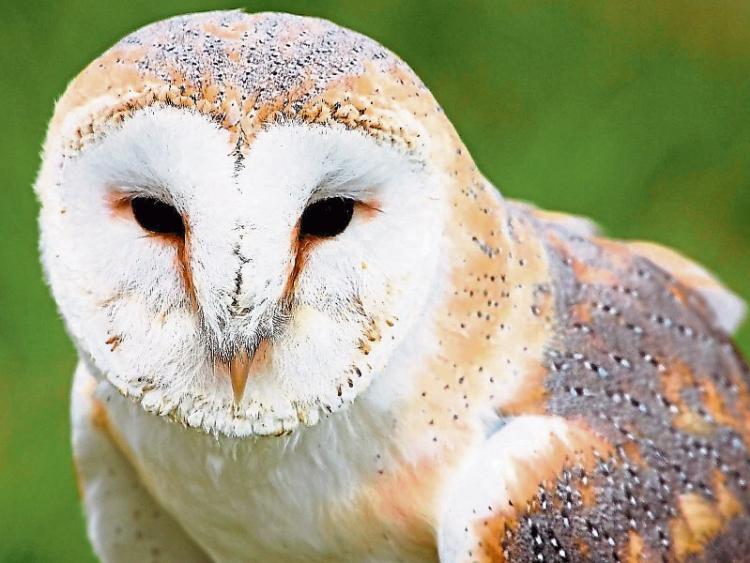 A barn owl but did you know there are thirty sub species around the world?

The biodiversity of wetlands in Ireland has been estimated to be worth €385 million per year to the Irish economy.

Yesterday February 2 was world wetlands day and is the 50th anniversary of the Ramsar Convention which recognized the importance of wetlands for the first time internationally.

A wetland is an area of land that is saturated with water either permanently or seasonally and where the water table is near the surface. There are special types of plants adapted to cope with wet conditions and they are in abundance at Cabragh.

The biodiversity of wetlands in Ireland has been estimated to be worth €385 million per year to the Irish economy. Why not use Cabragh to explore the wetland treasures on your doorstep and to enter the World Wetlands Day photography competition for amateur photographers. Upload your photograph via the Wetlands Surveys Ireland Snapshot App.

One species that will definitely visit Cabragh Wetlands is the barn owl. Nature sticks to its own timetables and presently, hidden and unobserved, the barn owl makes its preparations for that magical day in May when a new brood emerges and stares for the first time across the wetland-the white owl or in Irish, an Scréachóg Reilge which translates as the cemetery screecher.

There are thirty sub-species of barn owl worldwide and they occupy a range of habitats throughout the world from rainforest to savannah. It is one of the most widely distributed terrestrial birds and is found on every continent with the exception of Antarctica. They are a small bird when perched but in flight their size is significantly more impressive due to their long and broad wingspan. Their upper parts are honeycombed in colour with beautiful intricate patterns. Their heads can turn 270 degrees in both directions due to their S-shaped neck bones.

Although barn owls have a diverse range of calls, they don’t include the classic hoot or “twit-twoo” in their repertoire. They use an extensive range of twitters, chirrups, hisses, squeaks and clicks to communicate, to establish pair bonds and to warn predators but it is their impressive screeches or snores that we are more likely to hear.

Both adults emit a long and far-carrying screech as part of their courtship and territorial behaviour at dusk or during the night at any time of the year and particularly in the lead up and during the nesting season. Owlets and females “snore” which is a type of hiss which is a hunger call.

To the farmer and the horticulturist the barn owl has been a useful ally by controlling rodent pests around grain stores and farmyards and special windows were built in many farm buildings to allow the owls access to nest in the loft space. A breeding pair of barn owls can dispatch over 2,000 rats and mice in a year. Today their popularity continues for different reasons, a Late Late Show appearance or in the Harry Potter movies.

In Ireland the decline of barn owls has been the object of widespread research. The intensification of agriculture has negatively impacted on the barn owl. Removal of hedgerows, loss of small scale tillage, the switch from hay to silage and the increased use of pesticides has resulted in the reduction of prey rich foraging habitat. Anti coagulant rodenticides have also become more toxic over time.

In Ireland there is generally good availability of suitable nesting sites. Many barn owls are killed on roads in Ireland each year with most reported from motorways, particularly in autumn when juveniles are dispersing.

Barn owls in Ireland are non-migratory and sedentary. Once a pair establishes in an area, they tend to remain in the territory throughout their lives. A good barn owl territory, in addition to suitable foraging habitat , will also have suitable nesting sites as well as a number of roost sites. The majority of nests are below the 150m contour. The size of the range depends on the quality of the habitat and the abundance of prey.

Home range sizes in Ireland are much larger than in Britain with breeding birds travelling up to 6Km and even further in search of food. Barn owls are very set in their ways and generally have favourite flight paths, perches and hunting patches which are used routinely, even nightly.

For a territory to hold a successful pair of barn owls, it must have prey rich hunting habitats with a plentiful supply of small mammals. Rough grassland, species rich grassland or unmanaged grassy margins at the edge of fields, hedgerows and woodlands are all optimal with wetlands and rank vegetation also important. A landscape without these will also be lacking in barn owls.