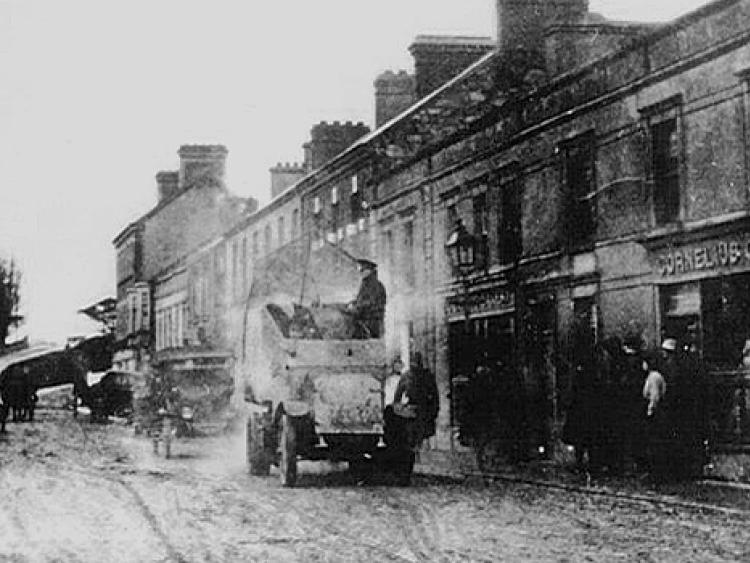 The was shot by Crown Forces at Bowling Green, Thurles

William was schooled with the Christian Brothers in Thurles, where some teachers would have been very vocal in their teaching of Irish Nationalism.

The street where William grew up in housed certain families that were associated with the Irish Republican Brotherhood (IRB). From a young age, William would have listened to his old neighbours relating stories of patriotic men who gave their lives in the name of Irish freedom.

On leaving school William worked as a farm labourer with Denis Dwyer of Castlestown, Thurles, about a mile from his homeplace in Quarry St. (Mitchel St.).

William joined the Thurles Volunteers (IRA) in 1917 and was sworn in at a house in Quarry St. (Mitchel St.). He participated in raids on RIC barracks and in ambushes against the Crown forces in and around the locality. He was a loyal volunteer up until his death at Bowling Green (Loughtagalla) in 1921.

It was Sunday February 27 1921, which was a cold and frosty day with a cold biting wind and the temperature at 10 C on the day. It was after last Mass that the volunteers (IRA) assembled on the hill at the Bowling Green (Loughtagalla). A large number of local Volunteers (IRA) from A/Company 2nd Mid Tipperary Brigade, Thurles area, gathered to perform drill practice. They braved the cold wind and frost and began their drill training in the area known as Loughtagalla, just off the top of Quarry Street (Mitchel St.) on the East side of Thurles town.

About sixty volunteers (IRA) assembled in the area which consisted of the Bowling Green, the old Fort and where St. Patrick’s Cemetery and Moyne Road is situated today.

The reason that the volunteers (IRA) trained in this area was the high vantage point overlooking the approach road from Quarry St. (Mitchel St.), anything approaching up this road from the town could be spotted by the scouts on lookout.
The volunteers (IRA) broke into small groups and began their drill practice and other military activities. They were some ways into the training routine when the scouts that were positioned on duty, were notified by volunteer William Kelly of the Crown forces approach.

William Kelly was coming from last Mass to participate in the drill training, when he spotted two military lorries approaching the volunteers (IRA) position from Pike St. (Kickham St.).

William ran to informed the scouts who were caught off guard by the Crown forces approach.
The volunteers climbed over a wall into the field to notify their comrades of the enemy approaching. William Kelly was running across the field to warn his colleagues of the enemy approach, when the Crown forces quickly jumped from the lorry and demanded him to halt.

William kept on running to warn his comrades of the enemy, as he did so, he was fired on by the Crown Forces and was mortally wounded in the right side of his abdomen. William collapsed of his wounds onto the cold frosty ground in the field at the Bowling Green (Loughtagalla). His comrades made their escape through the surrounding fields and countryside, with a small handful hiding in the undergrowth in the hope of rescuing their fallen comrade.

But the Crown forces climbed over the wall and surrounded the mortally wounded William Kelly who lay dying on the cold frosty ground. They dragged William to one of the lorries and threw him into the back of the lorry with his legs hanging out. The sad part of shooting was that William’s house was only about fifty yards away from where he was shot.

The Crown forces then drove past William's homeplace while his parents were at the door, the Crown forces taunted William’s parents by driving past them again a second time with their son’s feet hanging out of the back of the lorry. The parents were traumatised seeing their son who was mortally wounded at that time while being driven away, not knowing if he was dead or alive. William Kelly died from his wounds within the hour of being shot by the Crown forces.

A statement by William Kelly snr on the death of his son…. “on the 27th February my son was on his way to join his comrades on volunteer parade, when two lorries of Crown forces opened fire on them, my son received fatal injuries from bullet wounds from which he died.” (William Kelly snr 1935).

An enquiry into William’s death was held at the Military Court, in Thurles on March 10, 1921, which was also the day of more murders in Thurles by Crown forces. The verdict by the Crown, stated that William Kelly died from shock and haemorrhage following gunshot wounds to the abdomen.

The military stated that his death was “Justifiable Homicide”.

What is justifiable homicide?
Justifiable homicide is described as a killing without evil or criminal intent, for which there can be no blame, such as self-defence to protect oneself or to protect another, or the shooting by a law enforcement officer in fulfilling his/her duties.
So how could the death of William Kelly be classed as justifiable homicide when he was unarmed and running away from the Crown forces, when they opened fired on him, killing him for no other reason other than he was an Irish volunteer.

The Thurles Tragedy
The poignantly sad death of the young man Kelly, of Mitchel Street, Thurles, who lost his life by bullet wounds at Loughtagalla on Sunday morning evoked feelings of the very deepest sympathy for his humble afflicted parents, whose principal mainstay he was.
A good living young man and a great worker, no weeks passed that he did not contribute substantially to the family purse. The remains were interred in St. Mary’s Graveyard on Wednesday, on Thursday morning Solemn Requiem High Mass was offered for the repose of his soul.
It is right to state that the young man remained conscious up to the and through suffering frightful agony died a most edifying Christ-like death, in peace with God and all mankind. (Tipperary Star 5/3/1921)