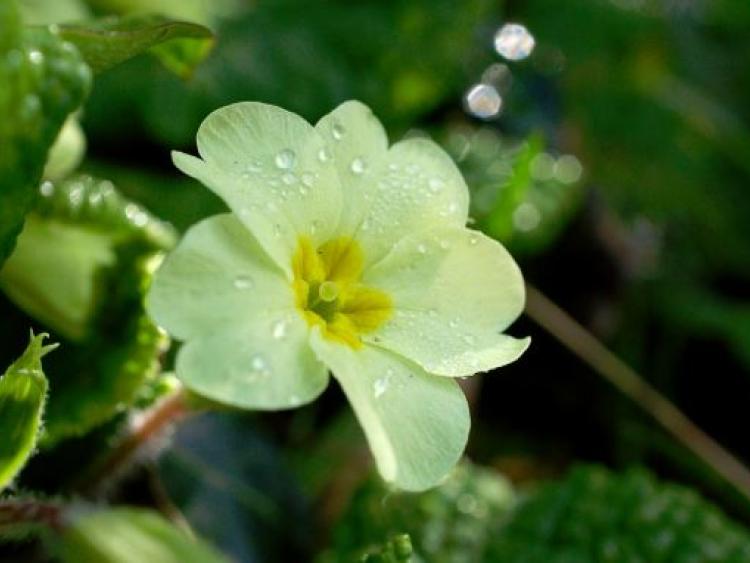 A sign of spring as the primroses appear in our countryside

Many spring plants, the primrose for instance, form cushions or clumps which conserve the sun’s scarce warmth.

The strengthening sun is beginning to release winter’s grip.

The ground is warming up but the air is still quite cold and there could yet be a sting in the tail. Plant growth is triggered and can be sustained whenever the mean temperature rises to 6 degrees but it is the variation around this critical threshold that makes spring such a fickle period for plants.

A north facing roadside verge may sleep on in the chill until late March while the south side, basking in the sun, may produce celandines in early February. The same celandines have a short day, barely opening before 9 a.m. and closing at 5 p.m.

Some plants flower only when the length of day falls within certain limits but spring flowers require less than twelve hours of daylight to bloom. The celandine , like snowdrops and daffodils, has an underground cache of nutrients in the form of bulbs which get the plant going as soon as the soil is warm. Long after the flowers have died, the leaves continue to manufacture nutrients.

Many spring plants, the primrose for instance, form cushions or clumps which conserve the sun’s scarce warmth. Decaying plant litter is also a good insulation which generates some heat of its own so spring begins a few days earlier for ground elder, ground ivy and lords and ladies.

Many of our spring flowers are a relict of the time when Ireland was covered in high canopy woodlands and must, because of decreasing amounts of light as the canopy closes in, by necessity flower quite early.

Trees also respond early to the first hint of mildness and one of the earliest is the sticky bud of the horse chestnut. Leaves of most deciduous trees are quite vulnerable when they first emerge and the oak leaf is diffused with a red pigment which may act as a protective filter against intense spring.

Several trees flower before they leaf which for us have become real harbingers of spring. In Irish poetry, An Draighneán Donn, the blackthorn, is the password for feminine beauty.

For a number of weeks now we have been suggesting a number of projects for citizen scientists and the opportunity is now there either in your own garden or right across the natural landscape to become a nature detective - it is the wildness of nature that is alluring and exciting.

Wild animals are free to go where they wish and their lives are quite remote from ours and they have a tendency to avoid us.
Our meetings tend to be fleeting and by chance. But we can compensate for the elusiveness of wildlife by putting on our detective’s coats, turning up our senses to the full and becoming a tracker.

Now that the floods are beginning to recede from Cabragh, there are vast areas of soft mud. Bird tracks are easy to recognize because they show four toes facing forward and the other back. Fox tracks are a little like those of a dog, but narrower with all the toe pads of a similar size, squirrel tracks have distinctive long soles with delicate toes and fingers and deer hooves have the double hollow.

The shiny trail of a snail is easy to spot and trace. Another source of identification is a dropping and in Cabragh we are always on the lookout for otter spraints as the mammal is an indicator of water quality. Foxes and otters generally leave their droppings in a prominent place and both have distinctive smells

Apart from droppings herbivorous animals may also leave evidence of eating in the form of damaged cones and nuts. Squirrels leave the centre of the cone with all the scales gnawed. Mice just gnaw one side of the cone or chew off a few of the scales.

All good detectives inevitably find a corpse. Most mammal corpses will probably be from fox kills. If the remains are a bird , look to see if any feathers are broken. If they are, the culprit is probably a fox, if not the killer is more than likely a sparrowhawk which plucks feathers from the victim.

Sparrowhawk kills are often just a mass of white feathers, usually those of pigeons. As you move around the wetlands you gradually morph into a forensic nature detective.

No decision has yet been made regarding our annual summer camp , “Detective in the Wild.” Hopefully we will all be able to return to the great outdoors and introduce the next generation to the wild and wonderful world of nature at Cabragh Wetlands.