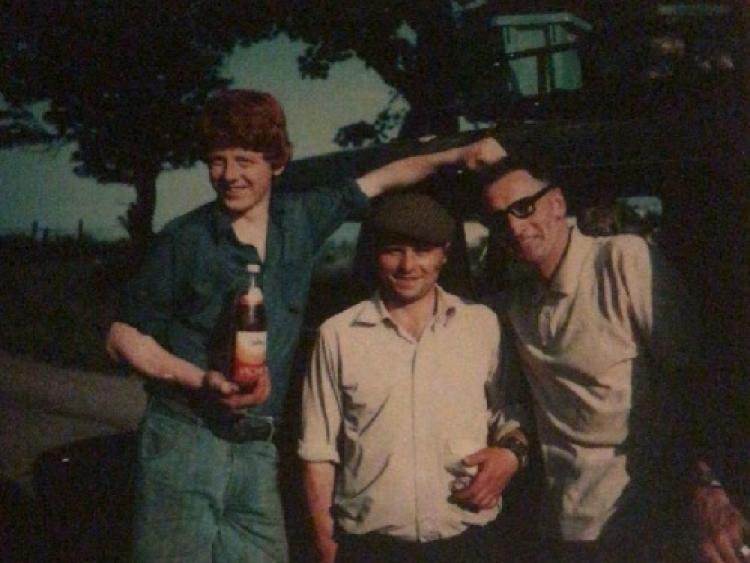 The social dimension of Bill McCormack's business cannot be underestimated. For many, he was a gateway to the outer world, coming with the latest news from the town! For him, it was a connection with his people. 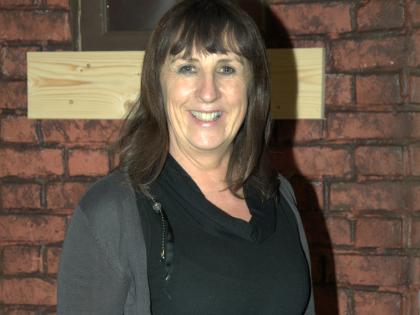 The daily grocery deliveries to those cocooning during the Covid 19 lockdowns have triggered memories for me of my father.

Throughout almost thirty years, from the early 60s to the late 80s, he earned his living selling the essentials of daily life to the people of rural County Tipperary, by means of his “travelling shop”.

I wonder do millennials realise that not every household owned a car prior to the 1990s. This made it extremely difficult for the people of rural Ireland to obtain their weekly provisions, and avail of basic services. Along came superhero Bill Mc Cormack to the rescue!

My father hailed from Ballinastick, Coalbrook at the foot of the beautiful Slieveardagh Hills, in South Tipperary. He was familiar with the daily requirements of isolated families. Thus, he embarked on a career that is now an integral part of the social history of Ireland, that of the “travelling shop”.

Having returned from England in the early 1960s with a young family, my parents purchased a bar and grocery in Thurles. It was from this premises that my father ran his mobile grocery business.

His first van was a small blue Volkswagen, updated to bigger models as required. Suffice to say that his customers looked forward to the much anticipated weekly arrival of Bill, in his blue van. His impending appearance generated particular excitement among the children, who waited expectantly for the “Van Man”, bearing their weekly ration of sweets!

In our house, Tuesday, Thursday, Friday and Saturday were called “Van Days”. The ritual commenced from early morning. Daddy would set out to Thurles Creamery to collect the crates of fresh milk. Onwards he headed to Sweeney’s Bakery for the daily supply of long loaves, small pans, grinders, batch loaves and sliced pans. On Thursdays he collected vast numbers of the local paper, the “Tipperary Star”, obligatory reading for his customers. The shelves of the van were replenished daily with the staples that every household requires. Sacks of clay- sodden potatoes had to be weighed and bagged, part of our daily chores during school holidays. An occasional country mouse peeped out from the spuds, much to the horror of us “towny children”.

I remember the chest of tea leaves, delivered via horse and cart from the railway station, having arrived on the freight train from the suppliers. More weighing, bagging and grumbling for us children! On van mornings, the bacon slicer whirred and greaseproof paper rustled. Eventually a huge stainless steel container of “Pat a Porker” fresh meats was carried out to the already heavily- stocked, blue van.

Similar to the “Community Response” during Covid 19, my father provided a personal service that responded to the needs of his customers. His regulars were always accommodated.

Someone might require a watch mended in Carew’s Jewellers, a coat dry- cleaned at The White Swan, shoes heeled by the cobbler Martin Loughnane , a letter posted in the Post Office, or photos developed in Hickey’s Chemist. It was a regular sight to see my dad, or during the school holidays one of us children, scurrying through the streets of Thurles, doing the necessary deliveries and collections. Click and Collect at its finest!

Finally, the blue van, heaving with every possible product from Dwan’s lemonade to hooped sanitary towels, would depart from West Gate, Thurles. It chugged its way to a multitude of townlands like Glengoole, Lisnamrock, Lickfinn, Coalbrook, Mellison, Copper, Earl’s Hill, Ballysloe, Gortnahoe, Ballynonty, Moyglass, Killenaule, Ballincurry, Ballingarry. And, of course, after chugging up “The Reen”, his beloved Ballinastick on Tuesdays and Saturdays was a staple!

In his copybook, daddy wrote out the list of purchases, with the accompanying prices. He added up each individual bill using good old- fashioned arithmetic. A calculator was only employed in later years! The money was then deposited in an “Afternoon Tea Box”.

The social dimension of the business cannot be underestimated. For many, Bill Mc Cormack was a gateway to the outer world, coming with the latest news from the town! For him, it was a connection with his people.

There was always a particular house on each route that boiled the water for his tea, and there he would chat while eating his sandwiches. He was a collector of stories, a keen storyteller with an inimitable style, and amiable good humour. He would describe colourfully for us that, in one of the houses, there was a dog looking out from every window! He regaled us with stories of “Boggin Haley”, a local character.

At the end of the day, an almost empty van would pull in home. The evening ritual ensued. Depleted crates and boxes were hauled into the shop, restocked, and hauled out again. The almost empty shelves of the van were replenished. The battery from the van was recharged on our kitchen floor. Of course, counting the takings of the day from the biscuit box was an essential component of the night procedure!

When I cast my mind back to that blue van and Bill Mc Cormack’s travelling shop, a myriad of memories present themselves to me. I remember our red kitchen chairs were regularly piled into the van. Being the family’s sole mode of transport, we were ferried everywhere in it from Butlin’s Holiday Camp to the seaside in Tramore. Regular daytrip destinations were also to The Vee and Glen of Aherlow. 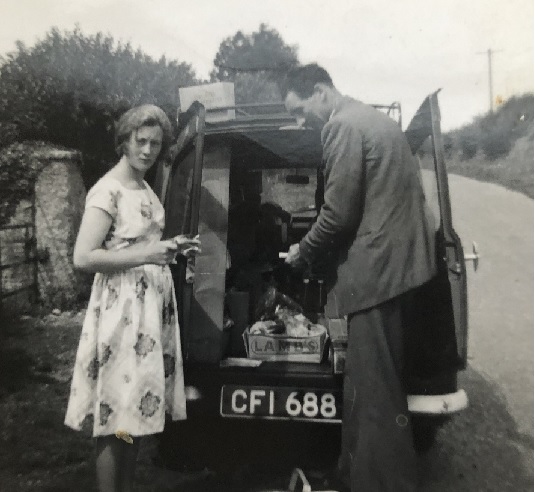 Service with a smile - Bill  and his trusty van pictured with another customer.

Our friends from Croke Street were piled into the van on a Sunday afternoon and off to Lady’s Well River. This was, of course, pre “Health and Safety” regulations! There wasn’t a seatbelt in sight!
I particularly recollect, much to my shame now, the embarrassment of being dropped back to boarding school in that blue van. The folly of youth!

Bill McCormack, and many others like him, was crucial to the fabric of rural Ireland. It was a tough life, sometimes working twelve hours a day, in all types of weather.

But, it was rewarding, and I know that Bill embraced the opportunity to interact with the people from his locality.
Hence, essential deliveries and “Click and Collect” services during the recent lockdowns aren’t such a new phenomenon after all.