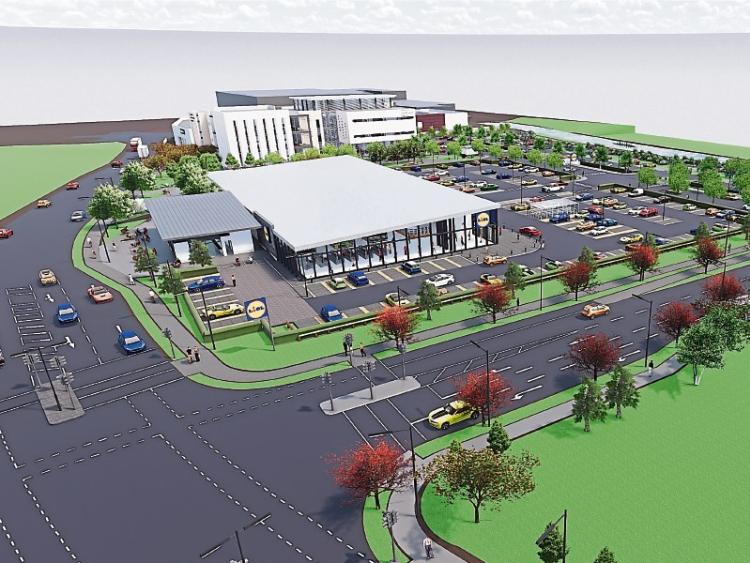 The Lidl store is almost completed and road works have been done, but the Clongour junction still poses problems for trucks

The issues were flagged with the TII but nothing has been done about them despite the major road works in the area.

Fianna Fail Councillor Seamus Hanafin has expressed his annoyance that a call for the junction at Clongour/Slievenamon Road opposite the new Lidl store, to be realigned to allow for the safe turning of trucks, has fallen on deaf ears.

Cllr Hanafin raised the matter at a previous meeting of the Municipal District Council stating that articulated trucks are having to mount the verge to make a right hand turn onto Clongour and this is leading to many tricky situations at the junction.

There had been widespread support for the call from Cllr Hanafin to have the junction corrected during the recent roadworks which are to take account of the new store entrance and the first leg of the link road across the River Suir.

“The junction was realigned a number of years ago but there has been nothing but problems there since. And, I asked for these problems to be sorted out when the current works were going on.

“Now, those works are all but completed and nothing has been done to sort out the junction. It is very annoying and frustrating and I want us to make every effort now to get this work done before the contractors leave the site. This is a matter of urgency now,” Cllr Hanafin said.

Cllr Jim Ryan supported Cllr Hanafin and said that a sight line problem with an adjoining property owner has also come to light and he called on the engineering staff to check this out and ensure that the difficulties are ironed out as soon as possible.
District Engineer, Mr Thomas Duffy, said that the local engineers have concerns also and will take them up with the main contractor who had been alerted to the issues.