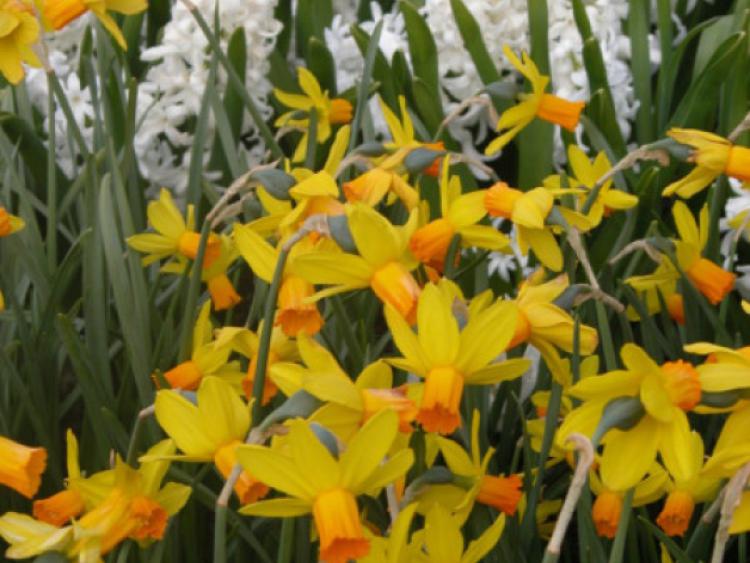 Nature is a real picture at this time of the year

Painters find interest in everyday details that almost everyone else would ignore such as trees, flowers, rocks, pools, clouds.

“Nothing is more beautiful than spring when weeds in wheels grow long and lovely and lush.”

The words of Gerald Manley Hopkins still ring true today in the present climate of a new beginning for the environment. Colour is creeping through the landscape bringing the same vibrancy to the natural palette as the vaccine to the pale wan cheeks of the long “lockdowned”.

The artist David Hockney, has had a prolific lockdown on a Normandy farm where he began living in March 2019. He has written a new book - “Spring cannot be cancelled” and has a new exhibition in May entitled “The Arrival of Spring, Normandy 2020.” The world is very, very beautiful but you’ve got to look hard and closely to notice that beauty,” he says.

Painters find interest in everyday details that almost everyone else would ignore such as trees, flowers, rocks, pools, clouds. Hockney is a connoisseur of sights that many of us would scarcely bother to look at. Despite lockdowns, variants, travel restrictions etc. spring cannot be cancelled and here within our 5 Km. wanderings, pussy willows are presently a riot of colour, the furze bush is turning ever more golden and the shine off the silver birch is ever more dazzling.

Deep in the Cabragh vegetation, the marsh marigold is showing its golden petals . Along the bend of the Killough river the blackthorn has “put on raiment of white” and this week the hedges of sceach or hawthorn, at least those not flailed within an inch of their lives, will turn green while the banks on which they stand still sport the early primrose and the emerging Robin run the hedge.

Recently, Minister Eamon Ryan launched the Climate Action Bill which commits to pursue and achieve no later than 2050 the transition to a climate resilient, biodiversity rich, environmentally sustainable and climate neutral economy - quite a mouthful! And yet, little by little, steps are being taken towards decarbonisation. Last week, sixty of Ireland’s largest companies have publicly committed to setting carbon reduction targets based on climate science. They are the first signatories of a new low carbon pledge and include major utilities such as ESB, Irish Water, Gas Networks Ireland and An Post.

The carbon budgets in the bill must cover the whole economy and all greenhouse gas emissions especially methane.
Once methane is mentioned everyone stares across the room at the farmers but in my experience, no sector has engaged more stringently and more positively with the new thinking on carbon emissions than the farming sector, be it the local farmers’ co-operative who strongly support local environmental projects or the new buzzword in farming circles the BMA - the biodiversity managed area.

In a typical 60 acre farm a number of initiatives may be taken - the simple act of pulling an electric fence a few feet out from the ditch or to leave a slightly larger headland in a tillage garden will add tremendously to the biodiversity potential of the surrounding hedgerows. They in turn will give much better wildbird cover and if the small additional space is scattered with a wildflower mix, the seed eaters, a particularly threatened species, will thrive.

Ground nesting birds, such as the skylark, snipe, lapwing and curlew are also hugely threatened. Development of a small wet area would be beneficial to these species and better again if a few small ponds could be excavated. These habitats need some form of management and grazing is necessary for ground nesting birds but it is essential that numbers of animals are limited in these areas.

Another habitat that is essential for biodiversity is rough grazing and that is also seen as a key part of the BMA project.
On one particular farm, 150 oaks were planted to change a quarry into a woodland which meant that many of the tit family would have insect food from the canopy leaves throughout the nesting and rearing season not to mention birds like the tree creeper that feed on the insects of the serrated bark and make the oak the most prodigious tree in biodiversity terms in the Irish landscape.

Other initatives might be be scrapes on south facing banks, nettle patches and riparian buffer strips. The best feature of the scheme is that there is an auto-fail process with livestock access, run off, pesticide, fertilizer levels, slurry application and dumping of spoil leading to automatic failure. Bíonn gach tosú lag but these steps are the beginning of a brighter day.
Easter Draw takes place at Cabragh on Holy Thursday morning. For the last few choc ices, sorry, tickets, phone 086 2122456.