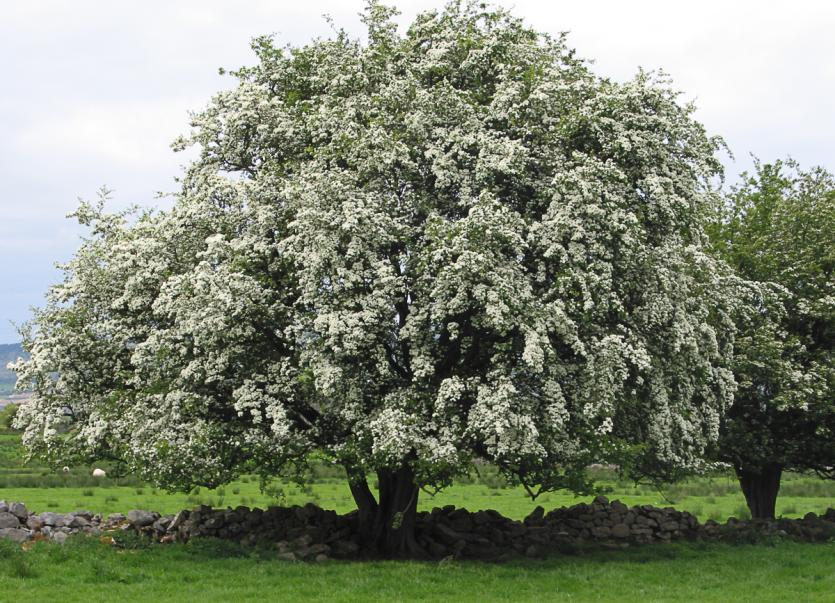 The hawthorn tree with its distinctive flowers

“Bring blossoms the rarest, Bring flowers of the fairest” - my mind’s eye takes me to the country kitchen of long ago, a shaft of sunlight through the small window, the crackling voice of the tenor lighting up the room, sound bouncing off the dresser, the meal chest, the ring on the wall for the calf and smiles spreading across the faces as the prospect of summer dawns, albeit a summer full of hard work with hay and haggard.

So many years later the same voice brings a lump to the throat. Is it the memory of those long gone but never forgotten, is it the ancient language of “radiant in bowers” and” azure’s bright hue” or is it something that has never been totally extinguished in the Irish heart, that Celtic connection with nature and the human soul, particularly with the mere commoner of the woods, the may bush or the hawthorn?

In Rocque’s map of Cabragh in 1755 there must be well over one hundred miles of hawthorn hedges involving hundreds of thousands of “quicks” from Ballycurrane to the Yellow Lough. In the late May of the present year it is the lovely aroma that gives the greatest summer pleasure and despite all that has been flailed or removed ribbons of white still festoon the landscape.

There are many stories of harm and even death coming to those who interfere with the fairy thorn, especially the lone bush growing by itself in the open. A widespread belief in Ireland and elsewhere was that the hawthorn blossom was unlucky, indeed the most unlucky of plants with death resulting if brought into the house. Recently it has been shown that one of the chemicals that make up the flower’s sweet scent is also present in the early stages of tissue decay in corpses .Small wonder that people were reluctant to bring in the “smell of death” into their homes.

Perhaps the superstition dates back to the outbreak of the plague when so many dead lay unburied. It is also held that the whitethorn was the tree upon which Christ was crucified and that his crown of thorns was made from the whitethorn.
The hawthorn featured heavily in Maytime customs both in Ireland and abroad when a suitable bush was brought before the house and decorated with flowers, ribbons, eggshells and sometimes rushlights were attached to the bush and lit at dusk on May Eve.

The leaves of the hawthorn are indented and longer than they are broad and are a feature of Irish hedgerows. The foliage is devoured by huge numbers of insects, especially caterpillars of various moths. Hawthorn blossoms in May shortly after the leaves have unfurled and the trees soon become smothered in white and occasionally pink flowers. The berries, haws, provide a rich splash of colour into autumn and are a vital source of food for birds, particularly during cold periods.

Blackbirds, thrushes, large flocks of redwings and fieldfares are very common on hedgerows. Birds are essential for the spread of hawthorns. The seeds have a tough coat which prevents the pip being digested by the bird which eventually drops them some distance from the parent plant. If hawtorn is unmolested by hedgecutters , it can grow to a height of 45 feet. Their natural span of life is about one hundred years.In old age the trunks become gnarled, twisted and furrowed and constant rubbing by cattle tends to polish them to a glossy sheen.

Their introduction to Ireland as living fences happened with the enclosure acts of the 18th century when hawthorn hedges were planted as an alternative to stone walls, ditches and hurdles. Their maintenance as a stock proof fence is an art in itself. Hedge laying is an old technique where the hedgerow stems are not removed but are cut three quarters way through near the base and bent over at an angle. New shoots grow from below at ground level, thickening the hedgerow base.

It is hard work but the re-juvenated hedge can be left to grow for 25-30 years and then laid again or routinely trimmed. The hedgerow will remain dense and stockproof for far longer than one that is managed mechanically.

Currently, the Wildlife Acts control the seasonal timing of hedgerow trimming with a ban for the period from March 1 to August 31.

Our thinking with regard to hawthorn hedges is beginning to change and now the newer agricultural incentive schemes are rewarding prudent hedgerow management .