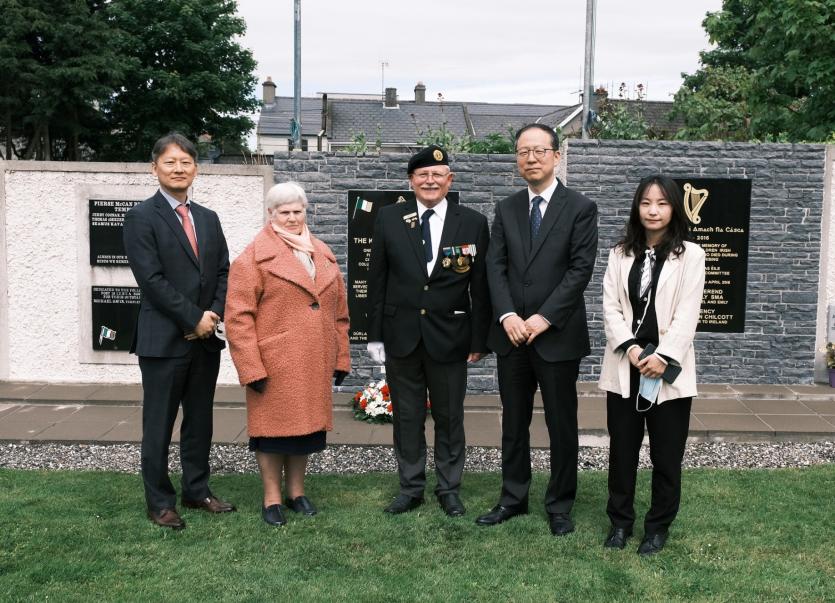 Tuesday morning May 25, saw an early start to what was to be a historical day for St Mary's International Garden Of Remembrance and for the town of Thurles.

Our first ceremony of the morning was at 10.30 am when we had officers from the United Nations Veterans Associations Arbour House, Mount Temple Road, Dublin, Mr. Barney Flanagan and Mr. Michael Thompson, Mr Pat Walsh and Mr John O'Mara I.U.N.V.A North Tipperary Branch Post No 18.

It was a sad day for post No 18, it was their last official visit to St Mary's - the branch was to be disbanded after the Ceremony. Post No 18 have always attended all ceremonies starting back in 2000. They were the first colour party to participate in the official opening and unveiling. It was fitting that two of the I.U.N.V.A veterans Mr Pat Walsh and Mr John O'Mara were with us on such an historical day.

It was the first time that officers from I.U.N.V.A headquarters visited St Mary's - they were very impressed with all the memorials and the garden, the layout and the tidiness, a credit to the committee.

One of the reasons for the visit was to make a video of St Mary's Garden of Remembrance for the archives up in head office. Mr Michael Thompson, who was on camera, Mr John Wort was tour guide and he gave a running commentary on the detailed history of all the memorials and events going back to the official opening. 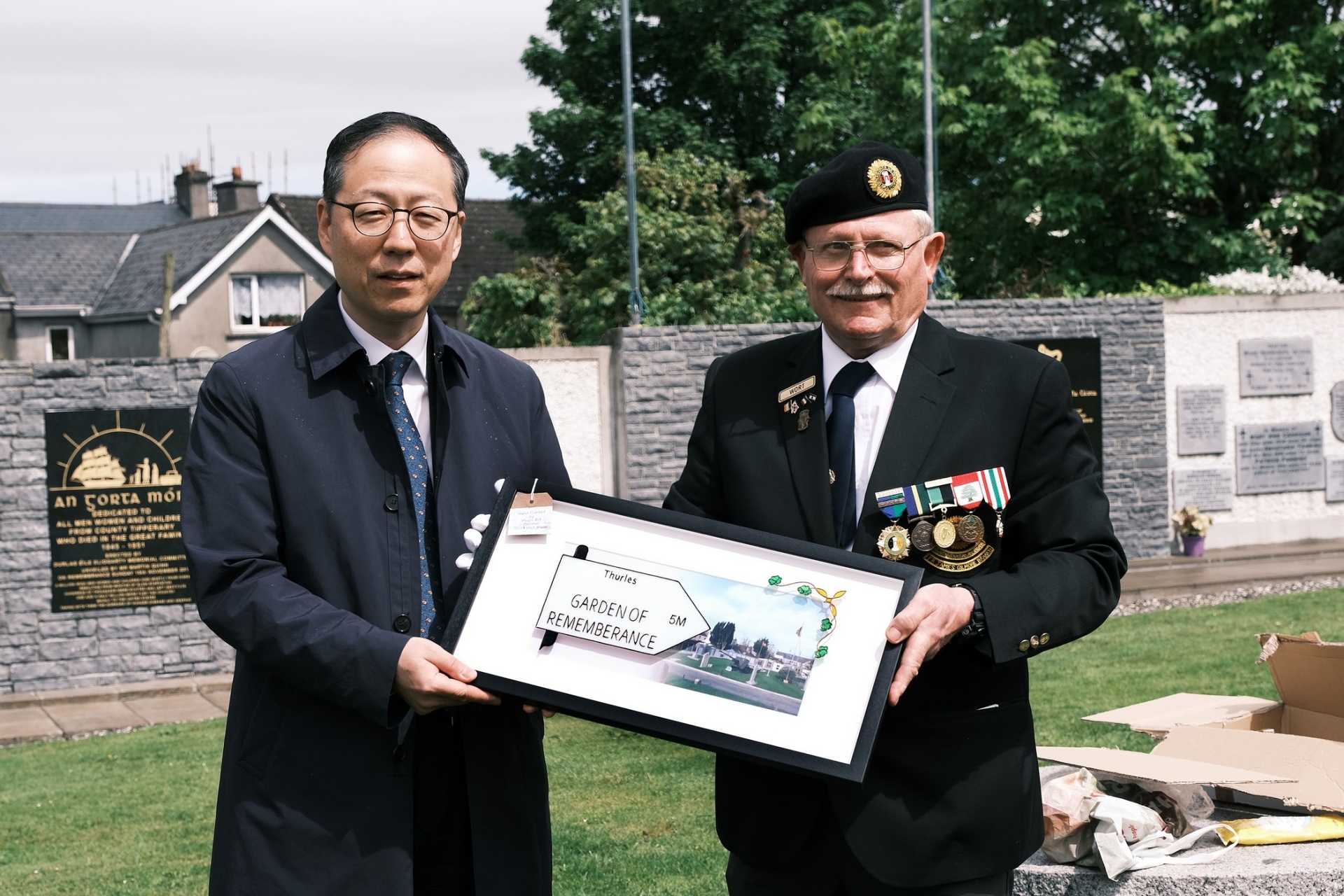 Mr Flanagan said what he had witnessed in St Mary's was inspiring and he added that it was a great honour for him to be in Thurles, a garden of reverence, tranquility, peace in remembering all their fallen comrades who died in the service of peace with the United Nations, gone but not forgotten.

At 12 noon, at St Mary's Avenue Thurles the Republic of Korea Ambassador to Ireland Mr Ki - Hwan Kweon's car approached the gates of St Mary's International Garden of Remembrance. His Excellency, Mr Chanwoo , Ms Lee were met and made welcome by Mr John Wort, Chairman of the Durlas Eile Eliogarty Memorial Committee. The ambassador was then introduced to all the invited guests who were in a socially distanced single line.

On June 25, 2014 the Republic of Korea Memorial was unveiled by Mr Hae - Yun Park to the 110 Irish who died in the 1950 - 1953 Korean war. An historical day for the Durlas Eile Eliogarty Memorial Committee, the Republic of Korea Embassy and for the town of Thurles. I first met Ambassador Park at the Tipperary International Peace Awards in 2013. We shared our views and we found that we had a lot in common. I told the Ambassador all about St Mary's International Garden of Remembrance and I invited him to attend our Remembrance Sunday in November. He said he would be honoured to attend and after the Ceremony we had a great chat in relation to St Mary's. The Ambassador expressed a wish to erect a memorial to all the Irish who died in the Korean War with the permission of the committee. I told him that it would be a great honour to have a memorial in St Mary's to the memory of all the Irish who died in the Korean War.

On behalf of the Memorial committee, I thank Ambassadors Mr. Hae - Yun Park, Mr. Kang - il Hu, Mr. Woon - ki Lyeo, Mr. Ki - Hwan Kweon for their dedication and commitment attending our remembrance Sunday Ceremonies over the years.
On the day I said: “Here today, we remember the 110 Irish who died in the 1950 - 1953 war, 101 of whom were serving with the United Nation, eight in the priesthood missions and one Nun, Sister Mary Clare. We also remember here today the 89 members of An Garda Siochana who died in the line of duty since the foundation of the state.

Mr Guy Jones, Chairman Irish Lebanese Cultural Foundation, welcomed the ambassador with words of Fr. Kevin O'Rourke encapsulating his friendship for over forty one years of ties with Korea.
“If you wonder why Korea is in the blood, look to the heart, to friends that endure, to loyalty green as pine and bamboo, to the flowers that bloom in the snow.“ Guy revealed his intent to lay a wreath at the Irish Memorial during his upcoming visit to Korea next year .

The concept of twinning is a project launched by Durlas Eile Eliogarty Memorial Committee that consolidates the strong relationship between Ireland and the countries where the Irish have served in peacekeeping such as Lebanon. The Irish Memorial Garden in Tibnin South Lebanon twinned with St Mary's.
Finally a Lament to the Lives lost in the Korean War.

“There's blood on the hills of Korea,
It's the blood of freedom we love,
May our names live in glory forever,
And our souls rest in heaven above
And boy, when you go back to Dublin and Belfast,
When this war is over and done,
Just think of the ones left behind you

Out in the Korean sun. That was written by Mark O'Connell, An Irish Veteran of the Korean War.
His Excellency Mr Ki - Hwan Kweon was next to give his address .

He said: “As we drove down here today, I cherished the freedom of movement. This is something that until this year we would have taken for granted. Lockdown has highlighted for us all, the value of freedom. Freedom is something that the people of Ireland and the people of Korea have in common. However, both countries know all too well that freedom does not come free. Irish U.N Veterans fought together with us to defend freedom and secure peace in Korea over seventy one years ago now. As a result of their selfless sacrifice, Korea is a thriving country with a vibrant economy.

“Thanks to Korean War Veterans, Korea has built a free and prosperous nation. Korean people will never forget that the freedom we enjoy today are due to their sacrifice. It is a privilege to be in this garden of Remembrance. It is clearly well tended.

“This is a testament to the caring nature of the Irish people that is so endearing to us. Against the backdrop of this medieval church, I am reminded of the beauty that Ireland has to offer. I look forward to exploring every corner of it.
“The bonds of friendship between Ireland and Korea predate my tenure here. I would like to say a special Míle Buíochas to Mr John Wort, to the Memorial Committee, and all here today for your kindness to the Korean Embassy here in Ireland. We offer our sincere thanks for organising this ceremony. We are forever grateful to you for engaging with us and making us feel so welcome. I know that my predecessor enjoyed a wonderful relationship with everyone here .I reaffirm that friendship today.
“We look forward to welcoming you to events at the Embassy once it becomes possible to do so. I wish you all good health and I hope Tipperary win the All Ireland Final. Thank you.

The Ambassador went on to lay a wreath with Mr John Wort at the Korean war, followed by one minute of silence and the playing of the Last Post, Reville and the Republic of Korea and Irish Anthems.