Cabragh Wetlands: The plight of the lapwing 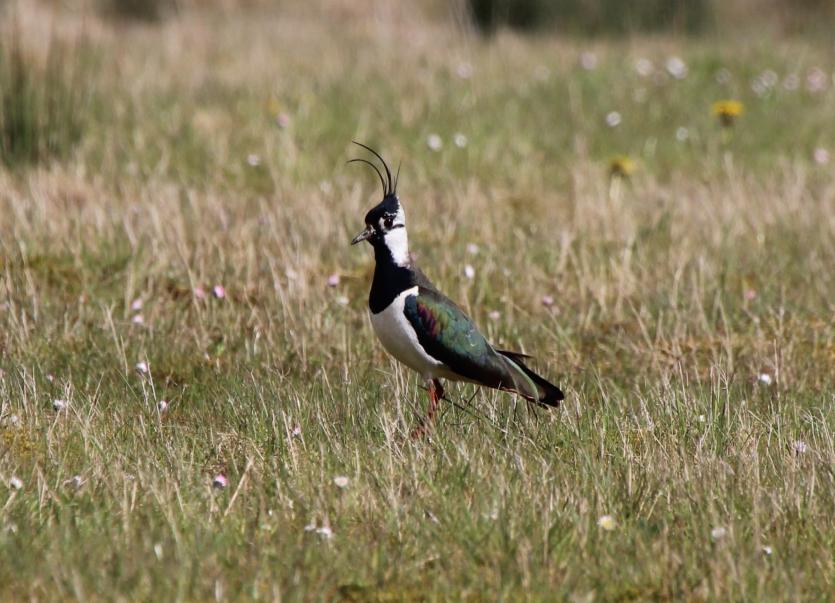 A lapwing surveying the countryside

The Lapwing is familiar to most country people who may know it as the Green Plover or by the Irish name Pilibin.

From a distance it appears to be black and white, it has rounded wings and a crest on the top of its head. If you get a good view of one in good light, you will see that the colour on the back is a beautiful dark green and there is a patch of iridescent purple on the shoulder. There is also a patch of brick red under the tail.

The Lapwing still breeds in small numbers throughout County Tipperary. A clutch of four camouflaged eggs is laid on the ground and a breeding pair will defend the area against all comers.

As farming becomes more intensified and more wet areas are drained, the breeding population in these islands continues to decline.

In winter, Lapwings from northern Europe come to Ireland for our soft climate and in times of severe weather on the continent, huge numbers are seen arriving at our coasts. Because the flocks can be so spread out, the numbers are difficult to count accurately but there may be a quarter of a million Lapwings in the country in mid-winter. Flocks three or four hundred are regularly seen at Cabragh over the winter.

Lapwing, like many other ground-nesting species in Ireland has undergone severe declines in breeding numbers: the most recent Bird Atlas reported a 53% decrease in its breeding range in Ireland in the last 40 years. Numbers at previous strongholds such as the Shannon Callows have declined by more than 80% in recent decades.

As a result of these serious and ongoing declines, the Lapwing is now red-listed on the Birds of Conservation Concern in Ireland list.

Two pairs of Lapwing have attempted to breed at Cabragh Wetlands this year, but both were unsuccessful. They may have laid eggs but they were probably taken by predators.

These birds have evolved to lay their eggs on the ground in wide open countryside. The eggs are very vulnerable to predation. During the daytime, predators such as Hooded Crows, Magpies and Ravens may take the eggs. At night, mammalian predators such as Foxes, Mink, Badgers and Pine Martins will take the eggs or chicks. Breeding failure caused by predation seems to be the main driver of the decline in the population.

Loss of habitat is another cause of decline. As the female sits on the nest, she needs to be able to have a clear view of approaching threats. When the chicks hatch they feed on insects beside muddy pools. If wetlands are drained and planted with grass or forestry, the area becomes unsuitable for breeding. The female won’t nest in tall vegetation and there is no food for the chicks.

There is a bog near Lisheen Mine where Bord Na Mona have ceased production called Baunmore. It has been re-wetted by blocking drains. It is probably the best site in Co. Tipperary for Lapwings with about twelve pairs nesting. There is safety in numbers and when a crow or a hawk flies into the site, all the adults get into the air together to drive them off.

There are plans to create the right habitat for Lapwings to nest at Cabragh Wetlands. This involves maintaining the height of the vegetation using horses for grazing at certain times. Some small drains may be blocked to create pools. Mammalian predators might be excluded using electric fences. Some individual trees will be removed as they provide vantage point for crows.

It would be fantastic to have Lapwings breeding at Cabragh again.