Dragons and damsels at Cabragh Wetlands 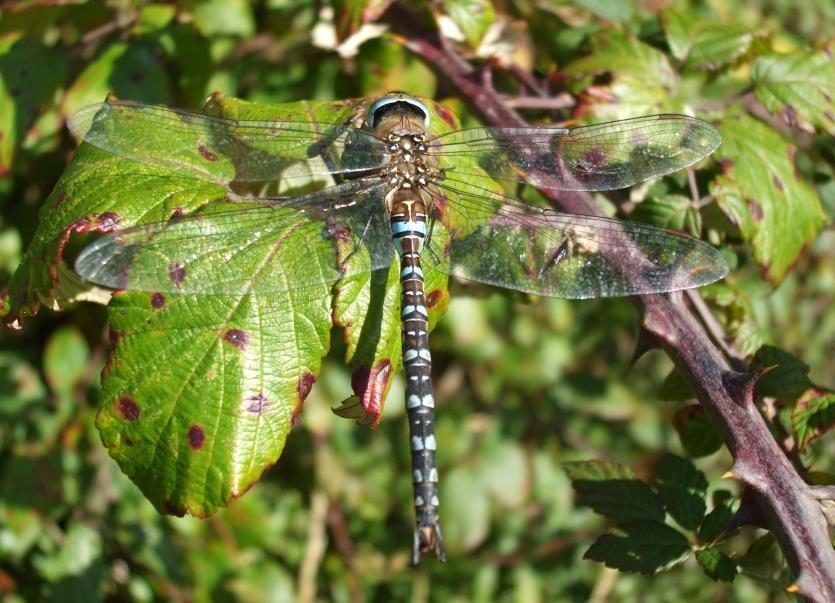 A migrant hawker at Cabragh Wetlands

Cabragh is an excellent place to see Dragonflies and Damselflies. They are not active in cold, dull weather, so choose a warm sunny day and they should be active between 10:00am and 4:00pm.

When I started taking an interest in wildlife, about 40 years ago, there was no internet. You had to rely on books.

A good field guide was, and still is, an essential part of figuring out the natural world around you. I still refer regularly to the Field Guide to Dragonflies and Damselflies of Great Britain and Ireland by Steve Brooks, with beautiful illustrations by Richard Lewington. It was first published in 1997. The copy I have now is a revised edition from 2002.

On October 12, 2009 I was walking down to the bird hide at the Fertianna side of Cabragh Wetlands. Just as I got to the hide I noticed a dragonfly perched on a bramble beside the path. It stayed in position long enough for me to get a good photo. I was pleased that I had a good shot of what I thought was a Common Hawker (Aeshna juncea), which is common in Tipperary.

That night, when I uploaded the photo to my laptop, I noticed a yellow mark on the back of the dragonfly. It looked like a yellow golf-tee. I had seen a mention of this mark somewhere in the field guide. Sure enough, this was a diagnostic feature of the Migrant Hawker (Aeshna mixta). This was a first record for County Tipperary.

The field guide mentioned that it was first seen in Ireland in the southeast in 2000. It had colonised the southeast of Britain and was spreading northwards. Back when I started, I thought that changes in the distribution of these insects happened very slowly, maybe over hundreds of years. I was amazed to find that a species can spread and colonise so quickly.

From that first coloniser in Cabragh in 2009, the species has increased to become a numerous species breeding at Cabragh. I have also seen them in good numbers in a bog near Urlingford.

Another larger dragonfly which is related to the Migrant Hawker, the Emperor Dragonfly, has also colonised Cabragh in recent years. This is our largest dragonfly and was first recorded in Tipperary by the late Eddie Foyle in Clonmel in 2002. It is now breeding throughout County Tipperary. These species have extended their range from southern Europe. They are no doubt benefitting from a warmer climate.

Dragonflies and Damselflies are beautiful creatures. They are completely harmless to humans. They send most of their lives as larvae in ponds, rivers and lakes. As larvae they feed on other invertebrates, small fish and tadpoles. As adults they are supremely agile aerial hunters, catching insects in mid-air. These are very successful creatures and have been on this planet a lot longer than mammals. The first true dragonflies appear in the fossil record from 250 million years ago.

Cabragh is an excellent place to see Dragonflies and Damselflies. They are not active in cold, dull weather, so choose a warm sunny day and they should be active between 10:00am and 4:00pm.

It takes a bit of patience to get a good photo because they can seem to hawk over the water non-stop. But they do come to rest on favourite perches. It doesn’t matter if you can’t identify them - just enjoy these beautiful creatures in warm sunshine, in a beautiful location.