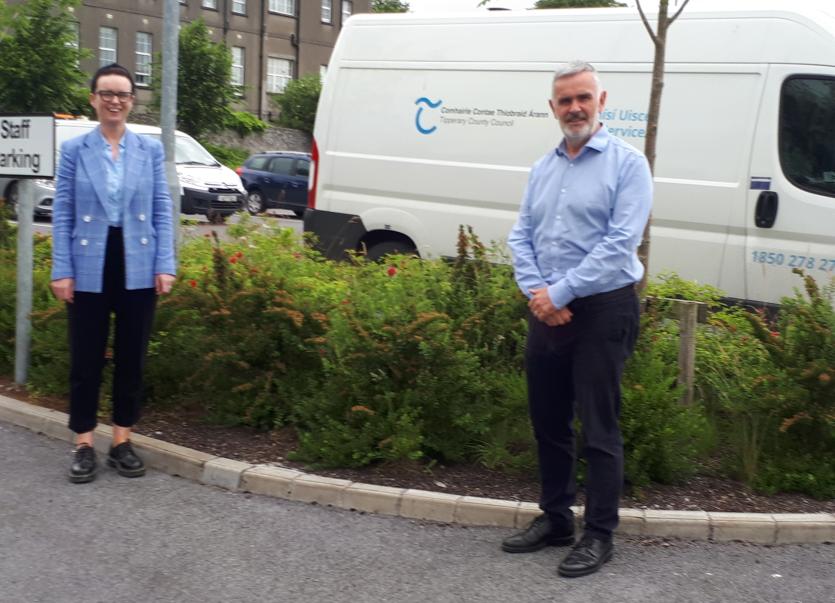 Sharon Scully, District Administrator pictured with Cllr Seamus Hanafin, both of whom are very excited about the new lighting project

Street lighting in Thurles will be significantly enhanced by the end of September through an innovative programme overseen by the University of Eindhoven and run through the Interreg NWE Smart Space project in connuntion with the Tipperary Energy Agency and Tipperary County Council.

This pilot scheme, which sees Thurles in the same category only as Sint-Nicklaas and Oostende in Belgium, and Middelburg in the Netherlands, will change the way public lighting is used in urban areas and will, in the process, reduce the energy bill by at least €17,000 per annum - it is estimated that energy consumption can be reduced to as much as 20% of current levels for standard lights.

The €400,000 spend on the upgrade of the lights is funded 60% by the EU and 40% by central government and it will see 518 public lights in Thurles replaced with smart LED light heads -Clonoulty (51 heads) and Drangan (35 heads) will also receive new lighting.

District Cathaoirleach, Cllr Seamus Hanafin explained: “This is a brilliant initiative for Thurles and significantly improve and enhance public lighting throughout the town. It will help to improve the ambience and make our streets far safer for motorists, pedestrians, cyclists and all users. And, we will be reducing our carbon footprint as well which is terrific. I congratulate all involved in this project,” Cllr Hanafin said.

The initiative began a number of years ago with former Thurles officials, Mr Matt Shortt and Janice Gardiner centrally involved. A number of workshops were held with officials from the University of Eindhoven and a plan was drawn up for Thurles in consultation with engineer, Mr Michael Tierney, which will see the lights replaced in Marlstone Manor, Cluain Glas, Jimmy Doyle Road, Nenagh Road, Parnell Street, Castle Avenue, Butler Avenue, Iona Avenue, Inisfallen Avenue, Abbey Road, Liberty Square, Stradavoher, Dublin Road and Monakeeba.

The lighting heads are fitted with sensors which detect movement of people and which will dim the lights when nobody is around, thereby saving energy. When there is movement, the lighting ramps up to normal. Public car parks for instance have little or no movement at night time, but currently public lighting is on full blast - now these areas can be programmed to run more efficiently.

And, the wonderful bonus with this lighting is that it can be programmed to change colour, making it a brilliant addition for the staging of festivals, St Patrick's Day celebrations, Christmas lighting, big match days in Thurles etc. The entire streetscape can be transformed with the flick of a switch thereby enhancing the ambience of the town.

“This is not about turning off lights. This is about getting the right amount of light at the right time, in the right place,” Engineer, Michael Tierney said.

For instance, pedestrian crossings in close proximity to schools can be programmed to brighten at peak school times with the coming and going of students, and return to normal for the rest of the time.

Work on the lighting is about to start in Thurles and since the infrastructure is already in place, it is very straightforward work for SSE Airtricity which will be completed by the end of September.

“We are delighted that Thurles has been chosen first for this initiative and we thank Matt Shortt and Janice Gardiner for their work on this. With this project and with the work which is currently underway in Liberty Square, it is great to be tying them in together and we are delighted to see that Thurles is leading the way when it comes to changes in public lighting. Hopefully this can happen throughout the county as well,” Sharon Scully told The Tipperary Star.

Councillor Peter Ryan said that is is great to see all the work coming to fruition and described it as yet another forward thinking project for Thurles, while Cllr Micheal Lowry also welcomed the initiative and looked forward to the lighting transforming the streets of the Cathedral Town.