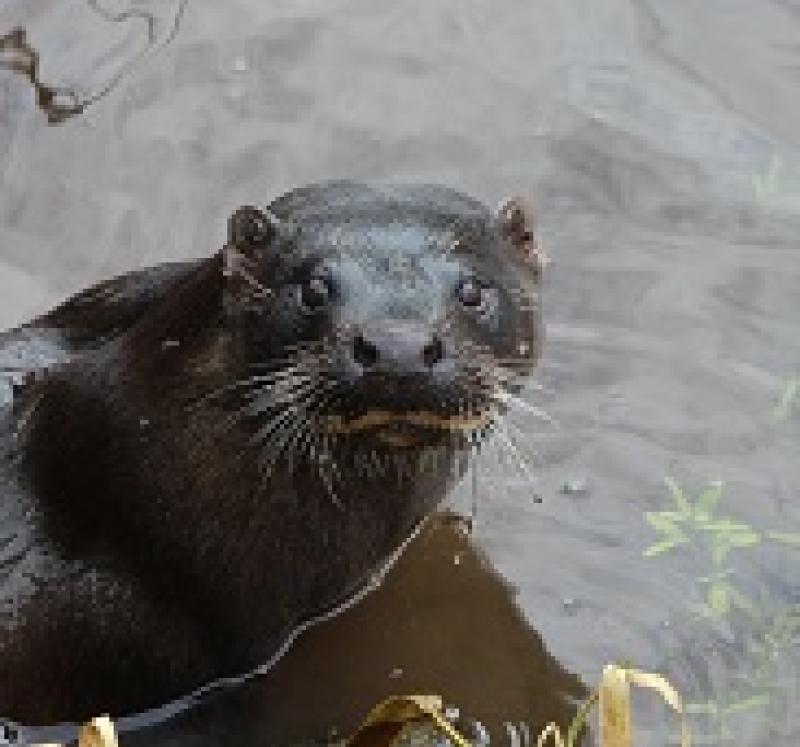 The Killough stream is only two metres wide and very shallow at present after all the dry weather. I was surprised to see signs of an otter in such a small stream.

Last week I went for a walk in Cabragh looking for birds, hoping for some early migrant waders.

There were very few birds about, so I walked the long way back to the centre. As I walked along by the Killough stream, I noticed an animal track through the vegetation leading into the stream. Just on the edge of the track there was a small ball of dry grass and on top of that was an otter spraint.

The Killough stream is only two metres wide and very shallow at present after all the dry weather. I was surprised to see signs of an otter in such a small stream.

Ireland has the densest population of otters in Western Europe. In a national survey conducted in 1980-81 evidence of the presence of otters was found in 92% of 2,373 randomly selected sites.

Otters are solitary animals for most of the year. They are usually nocturnal but are sometimes seen during the day on the quieter stretches of rivers or lakes in County Tipperary. There is still a healthy population along the Rivers Suir which runs to the west of Cabragh Wetlands.

As the animal can be very secretive, the best way to establish if otters are present in a given area is to look for their droppings called 'spraints'. These droppings are very important to otters. They are chemical signals to other otters to say 'this territory is occupied' or may indicate the sex of the animal and so on.

These spraints are blackish in colour and contain fish bones and scales. They are said to have a sweet, musky smell. The otter positions them at strategic points along its territory, usually on a rock or near the foot of a bridge. If no suitable rock is available, they will gather grass into a ball on the river bank and deposit their spraint on top of it.

In their book “Exploring Irish Mammals” Hayden and Harrington say that adult male otters usually weigh about 11kg but range from 7 to 16kg and that males measure about 120cm (4 feet) from the nose to the tip of the tail, while females are about 110cm.

James Fairley gives a lot more detail in his book “A basket of weasels”. The longest specimen he ever measured was 123cm but he did mention an otter that was killed on the Sixmilewater at Castle Upton, Templepatrick, Co. Antrim, a century ago was said to be 60 inches (1.5m) in length.

The main threat to otters is water pollution. As the quality of the water in Irish rivers is improving, the future for the Irish otter seems bright.