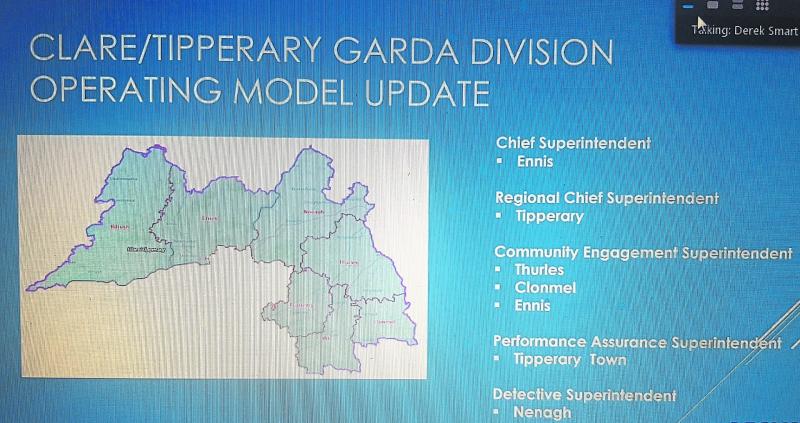 A new policing structure for the mid-west, covering all of Tipperary, means that Thurles will lose important policing functions in administration.

Cllr Noel Coonan pointed out that if gardaí had issues with dealing with drugs in Roscrea or Nenagh or Clonmel, as the distances involved presented “serious challenges”, how could they hope to deal with incidents in faraway Co Clare, “surely it’s an impossible challenge?”

“It means we won’t have a Chief Superintendent in Thurles, does that mean we’re going to lose yourself,” he asked Chief Supt Derek Smart. When are the changes due to come into effect? “A lot of people - and I think An Garda Síochána need the support of the general public - are very concerned about this move.” There had been some “false euphoria” recently as the Garda Commissioner had issues with the legislation, added Cllr Coonan.

Chief Supt Smart said the issue is “still there” as the finance hub is up and running in Clare, while administration and HR are to be moved soon, meaning that work will be transferred from Thurles to Ennis.

A Detective Superintendent will be based in Nenagh, away from the Superintendents in Thurles, but situated geographically between the two amalgamated divisions in Tipperary and Clare.
“That means we will have somebody on the ground to coordinate the types of responses that are needed,” said Supt Smart. “There will obviously be a lot of supports put in place for the divisional crime superintendent.

“But the Chief Superintendent sitting in Ennis will not impact too much, other than that he will be that bit further away. He will have people on the ground, with the community engagement Supers and particularly that Crime Superintendant, which is key to making this model work.”

It's unclear at present exactly when some of these changes will take place, but the new model is still “very much on the table”, added Supt Smart.