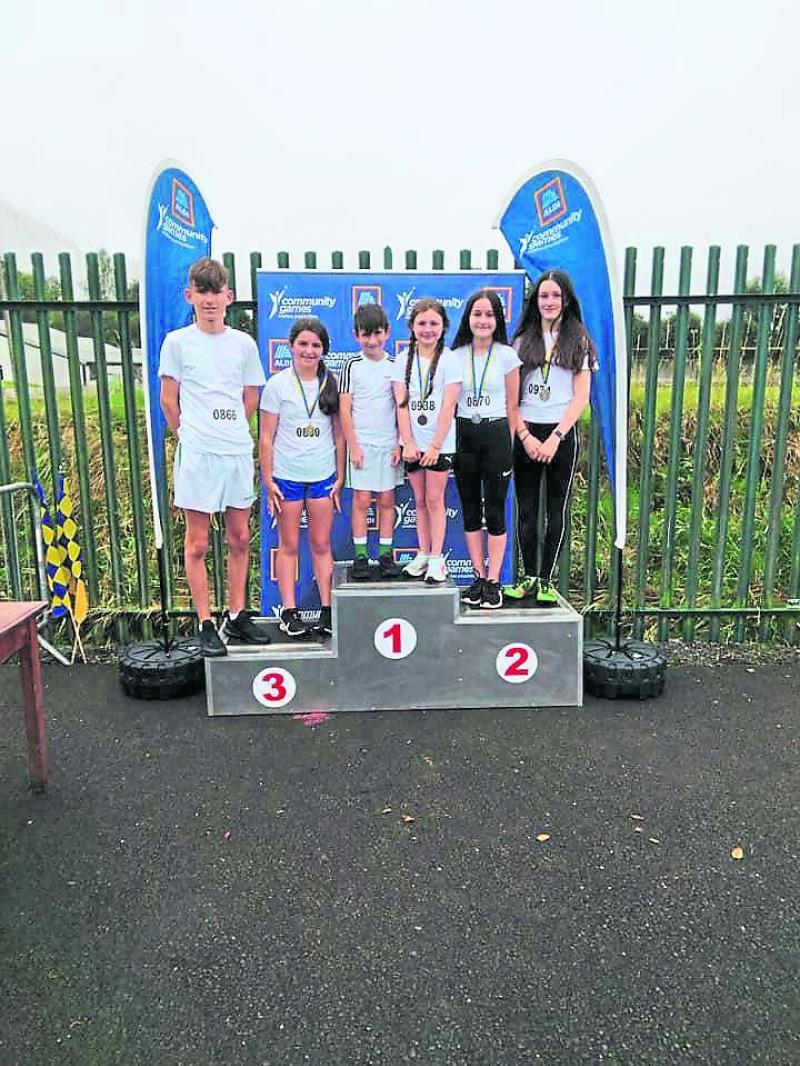 Templemore Athletic Grounds was the location for the County Community Games Track n Field final for 2021.

Thurles had a reduced number of 10 athletes entered for this years competition. Unfortunately 2 of our athletes were unable to compete on the day and our remaining team of 8 competed excepetional well across 5 different disciplines. Thurles parish claimed 2 Gold medals, 2 Silver, 2 Bronze and 2 4th place positions.

First up were 5 track athletes. The youngest of the group was Sean Cotter in the Boys u10 100m. Sean got out quickly in his heat and he qualified for the final in 3rd place. Overall, Sean finished in 4th position in the final by a very small margin in what was a very exciting race. Sean will back next year for another chance in this event next year.

Next up was April Kearney in the Girls u10 100m. April qualified in 2nd place from her heat and once again another exciting finish saw April claim the first medal of the day for Thurles with an excellent 3rd place bronze medal.

Rachel Dowd was next into action in the u12 Girls 100m and like those before her, Rachel qualified for the final with a 1st place in her heat. It proved to be an extremely close final and Rachel was just pipped on the line by the width of a vest to claim a silver medal.

This result guarantees Rachel's qualification for the Munster Community Games on the 18th of September in MTU Cork.

Representing Thurles in the Girls u14 100m was Eleanor Doyle who in her first year u14 finished in a fantastic 4th place position, this final saw all 4 athletes dipping for the line together and Eleanor finished just shy of the medals.

Last Thurles athlete on the Track was Dylan Cotter fresh from helping the Mid Tipperary u14 hurlers defeat Limerick, he gave a heroic display in the u14 80m Hurdles to claim the first Gold medal on the track since 2019 and qualification for the Munster Community Games.

Thurles had 3 athletes involved in the Field events. First up in the u12 Girls Ball Throw was Ella Mc Ginley who claimed a super 3rd place with 3 excellent throws in a hard fought competition and she claimed a bronze medal.

Not to be outdone by her younger sibling her older sister Sarah competing in the Girls u14 Shot Putt was to control things from the front with 6 outstanding throws finishing with a 8.06m pb and gold medal which qualified her for the National Community Games finals in October in Carlow.

Our final athlete to compete on the today was Siobhan Dowd who competed for the first time in the Girls u14 Long Jump. Siobhan acquitted herself very well over her series of jumps to collect a Silver medal and add to a total of 6 medals in all for Thurles parish.

Very well done to all the Thurles athletes who t competed in this yea's event. Well done Michael, Annette and Tipperary Community Games team for putting on all the Community games events in the County for 2021 under difficult circumstances it took a massive effort.