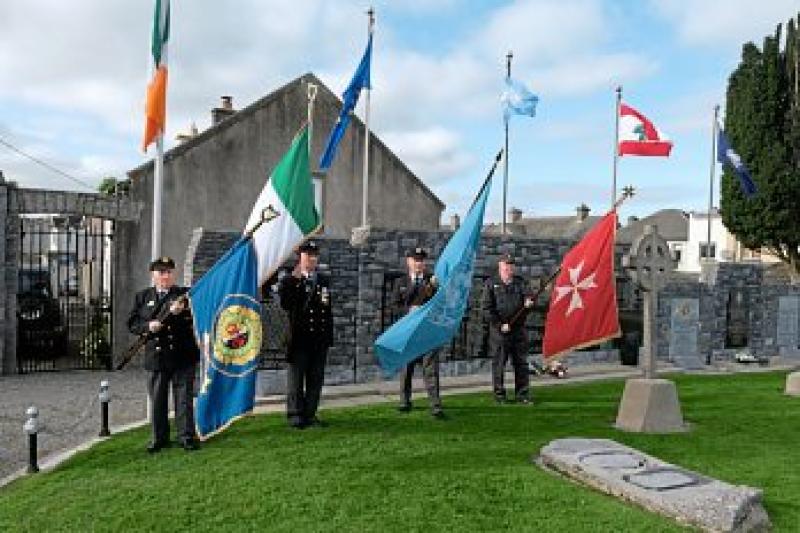 Councillor Jim Ryan, Secretary and MC for the day got the ceremony under way introducing Councillor Seamus Hanafin Cathaoirleach of the Thurles Templemore Municipal District Council. 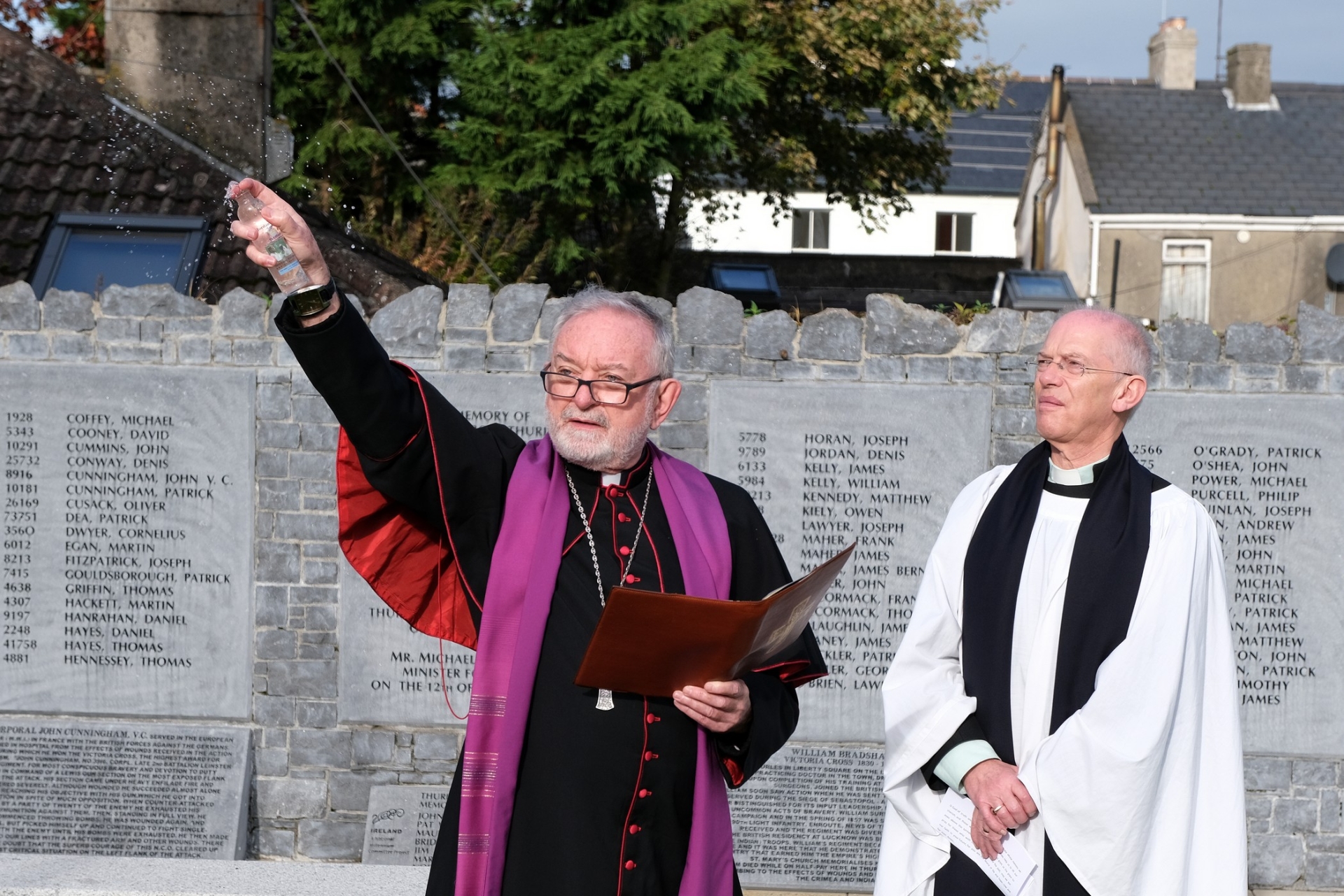 “As a nation we have been very good to remember those who fought and died for Irish freedom. Over the last 22 years there have been many tributes and memorials remembering the 1916 Rising and the War of Independence. It is right that we have done so, acknowledging the bravery and sacrifice of those who ensured our statehood.

“As a nation and a people, we have not been as good at remembering those who gave their lives in Europe, with the exception of the Church of Ireland who have a root of honour in the Churches.Over 200,OOO Irish men and Irish women served in the first World War and over 30,000 lost their lives.

“In Tipperary, we are rightly proud of our contribution to the War of Independence. It is interesting to remember that while 114 Tipperary men died in that conflict, over 1,100 Tipperary men died on the battlefield of Europe. But it took until the 90th anniversary of the battle of the Somme in 2006 for the Irish Government to be represented at any memorial, when the Thurles native ,and then Cabinet Minister, Mary Hanafin attended that memorial ceremony in an official capacity.

“In my own family , we have always remembered our republican history. My grandfathers involvement; my grandmother being a member of Cumann na mBan; the story of their shop being ransacked by the Black and Tans. Yet there was no mention of my grandmothers brother -John French from Carlow- who lost his life at Passchendale in the first days of August 1917. Of course he should be remembered too.

“I want to compliment the Dúrlas Éile Eliogarty Memorial Committee and Chairman John Wort. They were the first to open a memorial garden of this kind in Ireland, and now others have followed.Not only are we remembering the fallen of the first World War, this garden also remembers all who gave their lives at home and overseas in the service of peace and in all wars,” Cllr Hanafin said.

Mr H.E Mr Ki - Hwan Kweon, Republic of Korea Ambassador to Ireland, extended his gratitude on behalf of the Korean community in Ireland to the Memorial Committee for its abiding friendship over the years.

“I have had the great privilege to be in Ireland for over one year now. I have noticed a number of things. Firstly, iit is warmer than last year. In addition, it has been wonderful to witness the relaxation of restrictions. The resilience of the Irish people to push through this pandemic has been remarkable. It allows for us to break bread together today, for which I am very grateful.
“This ceremony presents an opportunity to remember the brave service members of all wars. Our own personal struggle in the cause for freedom is all documented and has been discussed. As many well know, having relied on brave men from across the continents to help secure our freedom,Korea is always grateful. It is only these brave service members who understand how difficult it is to achieve freedom and democracy.

“To honour these heroes, I visited each of the Korean War Veterans this year, from Wexford to Westmeath. They are full of enthusiasm as they learn how much Korea has progressed since those difficult days. It was a privilege to be able to thank those patriots for their service in person. I recognise that not everyone is as fortunate. As such,I reaffirm Korea’s longstanding gratitude to fallen members far and wide for their sacrifices,memorialised here today.They will never be forgotten.

“As we look ahead challenges remain for Ireland and Korea. Ireland faces the consequences of Brexit and obstacles continue on the Korean Peninsula .In the face of adversity, Ireland and Korea share the same determination to overcome these difficulties through peaceful discussions . It is one of many great things that link our two great nations. Two countries that have been fraught with conflict; that are now thriving democracies; Two countries that will always treasure those that gave so much for us to live as we do today. I thank you all for hosting me and my colleagues. Your generosity is second to none. This generosity has been on display wherever I turn in Ireland. As W.B Yates said.''There are no strangers here ; only friends you haven't met.

Mr Guy Jones, Vice Chairman of the Durlas Eile Eliogarty Memorial Committee and Chairman of the Irish Lebanese Cultural Foundation said that 47 Irish Soldiers died in the service of peace with the United Nations in Lebanon. The people of Lebanon are very grateful to all the Irish Soldiers who served and died in Lebanon they will never be forgotten.

Mr Martin Quinn, Secretary of the Tipperary International Peace Committee said that we can sometimes take for granted our values and institutions, our freedom to participate in culture and political events and our right to live under government of our choice.

“It was King George V1 that said without freedom, there can be ensuring peace; and without peace no enduring freedom. By remembering their service and their sacrifice, we recognise the tradition of freedom these men and women fought to preserve. They believed that their actions in the present would make a significant difference for the future .

“On this day and in this month of Remembrance, we acknowledge the courage and sacrifice of those who served and acknowledge our responsibility to work for the peace they fought hard to achieve . By remembering all who have served, we recognise their willingness , enduring hardship and fears taken upon themselves so that we could live in peace. Many were called and many did not return .They made the ultimate sacrifice to preserve the freedom we now know. Why wouldn't we therefore, acknowledge that sacrifice and do everything in our power to honour it,” he said.

Mr Arron Wort then read a poem, The Unknown Soldier , followed by prayers and blessings by His Grace, Most Rev Kieran O' Reilly, Archbishop of Cashel and Emly and the Rev Canon Ian Coulter, Templemore Union of Parishes, Church of Ireland.
Mr John Wort then read out the names of the 74 Thurles men who died in the 1914 - 1918 War and Mr. Eugene Scally, rang the church bell 74 times as the colour party from the Cobh Branch O.N.E and a member of the Order of Malta stood to attention .

The Exhortation was read by Mr John Wort followed by one minute of silence before piper Tadgh Ryan played a lament. Mr Charlie Parsons played the Last Post and Reveille while Piper Ryan concluded by the playing of our National Anthem.

As Chairman of the Committee I would like to thank all the people who attended from far and near to remember all who paid the ultimate sacrifice so that we as a nation and most of the world could live as we do in peace,” John Wort said.