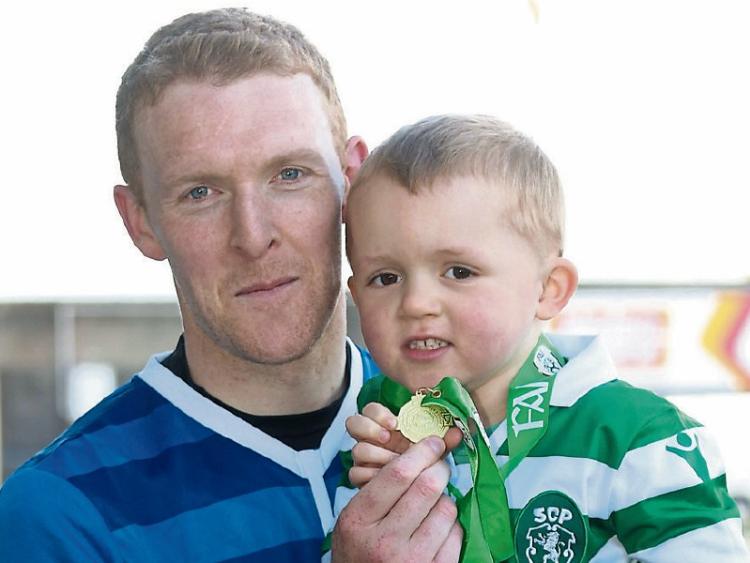 David Slattery, seen here celebrating his recent FAI Junior Cup win with his son Dylan, was on the mark for St. Michael's against Avondale United in the Tom Hand Cup final on Sunday last.

St Michael’s just came up short of winning another trophy in a silverware laden season when they faced off against FAI Intermediate champions Avondale at Cooke Park on Saturday afternoon in an excellent game that belied the poor weather conditions the players and supporters had to endure.

The home side did start well and had a number of half chances inside the first ten minutes with Ollie O’Driscoll and Russell Quirke going close, but it was the visitors who showed how to be clinical when they opened the scoring in the 14th minute after Danny O’Connell squared a cross for David O’Leary to bundle home from close range. Walsh in the Saints goal then had to be sharp off his line to deny Avondale a second through Jack Walsh, but within minutes the home side had levelled when Colin Bargary set up O’Driscoll to fire past the stranded keeper into the net.

Bargary was excellent in the middle at this point and just before the half hour mark set up Armshaw whose shot looked goal bound before only finding the side netting.

But Avondale continued to be dangerous and regained the lead shortly before the break when an excellent assist by Cillian Cooper set up Richard Tobin to score from twelve yards out, and send his team to the tea in front. The first quarter of an hour of the second half was relatively uneventful as the teams tested each other’s resolve in the middle of the park, but Avondale eventually took the ascendency and looked to have made the game safe twenty minutes from the end when they scored a third goal after a cross by Richard Tobin hit a Saints defender and deflected into the home net.

As can be expected of a team as resilient as St Michael’s, they never stopped trying and inside the final six minutes pulled the deficit back to the minimum when David Slattery rose like a salmon to head home, and set up a grandstand finish.

Alas for the home team, they lacked in luck and a little bit of composure and were unable to get the equaliser they desperately sought and fell to the odd goal in five. An excellent game with both sides showing why they have champion quality, but on this occasion the higher ranked team took the spoils.