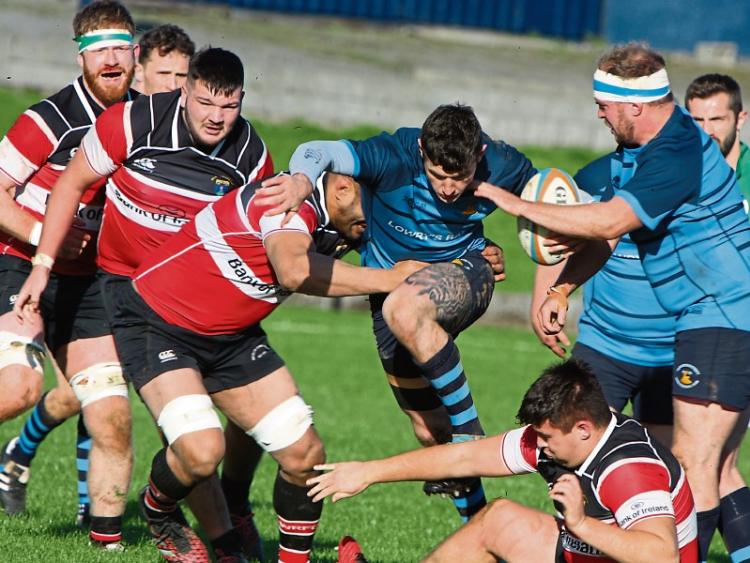 Kilfeacle and District’s Brian McLoughlin on the determined charge during his side’s victory over Wicklow in the All-Ireland Cup at The Hill on Saturday last. The home side won by 28-19.

On Saturday last “The Boys in Blue” were at home to Wicklow and were hoping to get their AIB All Ireland Junior Cup off to a winning start.

Straight from the kickoff it was obvious that the home side when playing at home on their own patch would never settle for anything less than a win. Wicklow proved a tough test at Morrissey Park despite being short of some front-line players. Kilfeacle and District were also understrength – they were affected in particular by Oola’s participation in the Limerick GAA Senior Football Championship Final.

Kilfeacle got off to strong start and had the vast majority of territorial advantage for the majority of the first 10 minutes but at first were unable to capitalize, to the crowd’s disappointment. Kilfeacle and District went ahead, and deservedly so, after 12 minutes with a well-taken penalty by William Staunton.

Kilfeacle’s pack were starting to look impressive and set up the next score for Kilfeacle when they won a penalty  from inside their own half which William Staunton scored with a monstrous kick. The pack then took over to win a penalty under the posts and Kevin Kinane made the most of the scrum option when he picked off the base to finish himself. William Staunton converted the try to bring the score to 12 points to 0 for Kilfeacle.  The lead was out to 18-0 for the turnaround – a looping pass found its way to Killian Noonan who improvised well to finish in the corner. Here is a young man who is improving every time he pulls on a blue jersey. Kilfeacle, with the aid of the breeze, were by far the better team in the first half but everyone knew from experience that Wicklow were going to come out in the second half with all guns blazing.

Kilfeacle were optimistic at half time that they could take advantage and push on to victory but Wicklow only need a sniff of a chance and they will pounce. In the 49th minute Wicklow won a scrum against the head and drove their hosts back over their own line for Michael Doyle to score a try, which was duly converted to bring the score to 18 points to 7. The home crowd were starting to feel slightly uneasy as Wicklow were coming more and more into the game, prompting William Staunton to kick three points at the next opportunity in the 53th minute after a spectacular break from William Hogan. 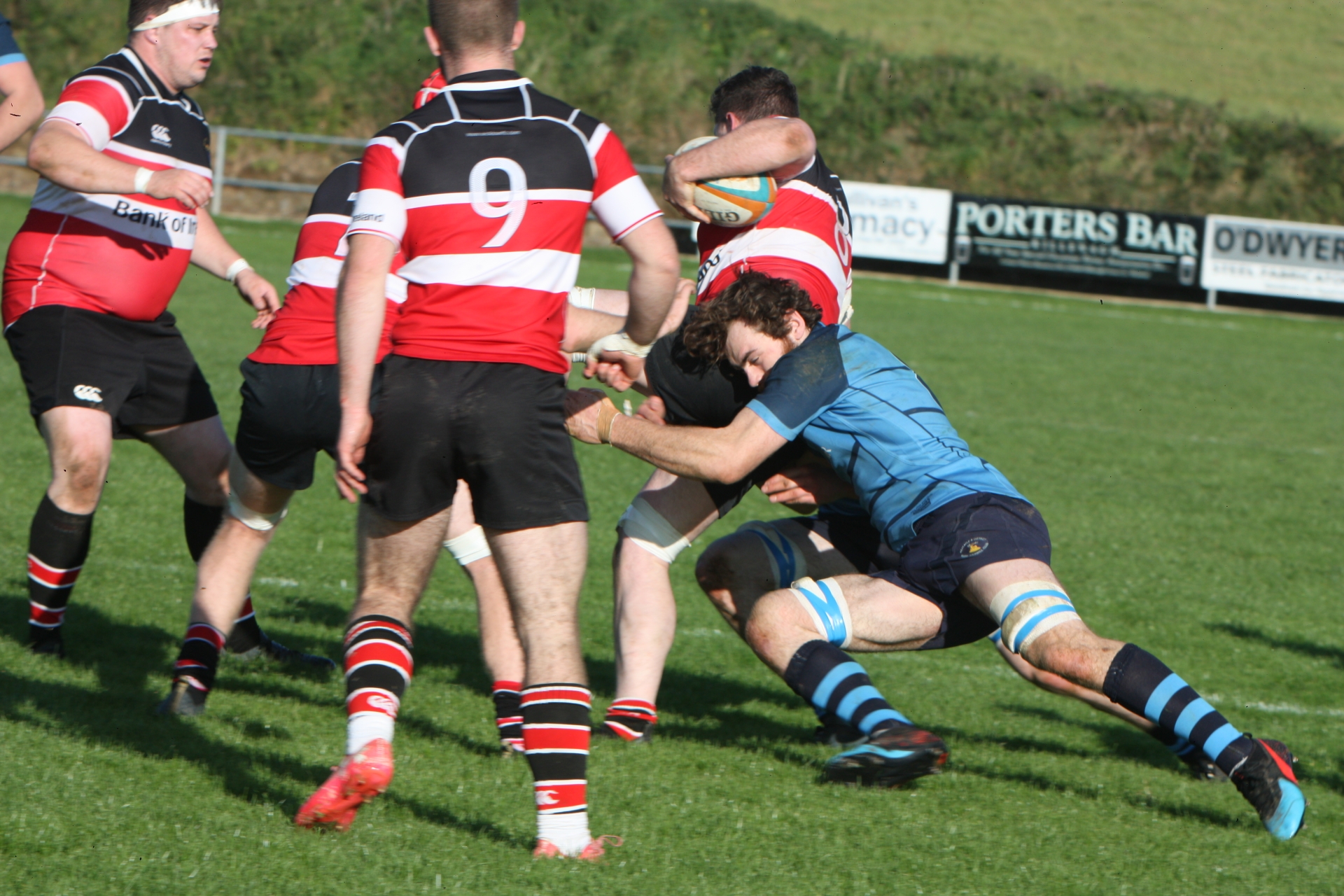 The introduction of player coach  George Naoupu further helped Wicklow’s cause as they created space for Hugo Wojnar out wide in the 60th minute to score an unconverted try. Now the scoreboard read 21 points to 12. It was becoming an end-to-end game and Kilfeacle needed someone to take this game by the scruff of the neck.

Cometh the hour cometh the man and on this occasion for Kilfeacle it happened when Ricky Whitney  burrowed over in the 66th minute. William Staunton’s conversion pushed his team’s lead back out to 16 points but the Leinster men kept coming and Michael Doyle got over for a second try which was converted by Ben Armstrong in the 76th minute.

The Boys in Blue couldn’t afford to rest on the nine-point lead they had left, but they were able to defend it to the final whistle. It was the home side who prevailed 28-19 in sunny but windy conditions.

After the game, player coach Willie Staunton said,  “We knew what we were coming up against today with Wicklow. I actually saw them in the Towns Cup Final last year and they’re a pretty impressive side. Typical Leinster side – like to use a bit of width with the ball so we had our work cut out for us. They’re  a dangerous team and it was important any time we got into the green zone in the second half against the wind, we said we had to come away with three points. We’re very happy with our defence today again at home.

“We pride ourselves on that. It’s a trophy that we’re going after again this year. We’ve a good draw. We’re at home all the way to the semi-final if we get that far. But very happy with the lads today. Our forwards really dug deep again. If we can get to four or five phases with basic skills we’ll be very very happy.

“Results are going our way. We’re not doing anything extraordinary. We’re doing the basics of rugby and it’s not a complicated game. We wish Wicklow all the best for the rest of the season and our focus now turns to our next game.”

Next week’s game is going to be a very tough challenge which we will face as we always do, together.” The coaching staff ask that everyone makes a concerted effort to be at training on time so as we can build on this excellent performance.

Next Sunday   at 2.30pm sees us travel to Abbeyfeale in the Munster Junior League Division 1. Abbeyfeale have started the league very well and home advantage makes them slight favourites. Once again the team and coaching staff are delighted and humbled by the numbers supporting each game and wish to thank everyone for their support.