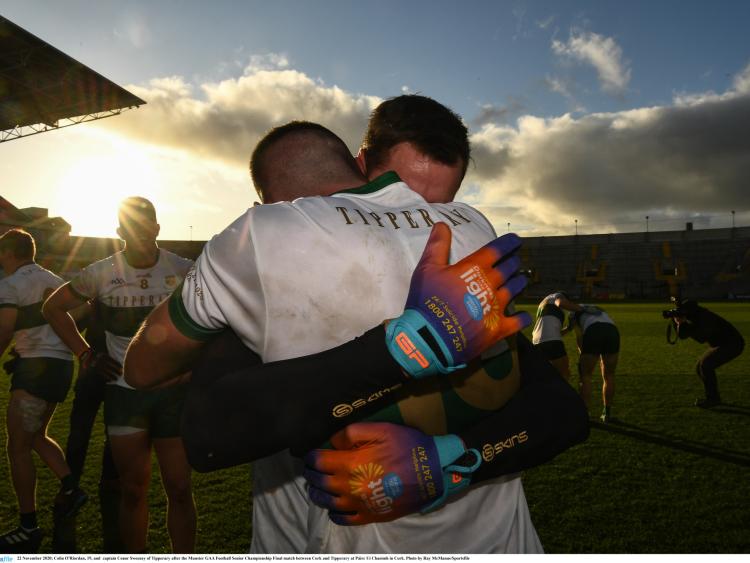 “You’re the best, better than all the rest” are the words of a song by Tina Turner which are very appropriate for the Tipperary senior football team following their historic victory over Cork on Sunday last.

There are not enough words to adequately describe the feelings of Tipperary supporters in witnessing the heroics of the Tipperary football team who defied all the odds and the pundits in claiming a victory that stunned many in the GAA community who would have felt that Cork were a shoe-in for the title.

They were however to be confounded by a Tipperary team that had other plans for the Munster title which included bringing back the Munster Senior Football Cup back to the county for the first time since 1935.

Eighty-five years is a long time to be waiting in the doldrums but all the years of pain and frustration faded into oblivion when Maurice Deegan sounded the final whistle in Páirc Uí Chaoimh.

There were tears of joy on the field and off as Tipperary players celebrated with wild abandon and the rest of the county followed suit in homes from Ballinderry to Ballyporeen and from Templemore to Tipperary.

This was the day that I have longed for for more years than I care to remember and what a day it turned out to be for football in the country when the four teams in the semi-finals are the same teams that contested the All-Ireland of 1920 which was played in 1922; Dublin, Cavan, Mayo, Tipperary. Was that fate or what?

I wanted to see the free-flowing, attractive football that we have previously witnessed from this team and they delivered that also.

They defended as if their very lives depended on it and they got their game plan right from the off putting it up to Cork straight from the throw-in.

Tipperary ran onto the field in the colours of Grangemockler with a picture of Michael Hogan on their sleeve and it was enough to give your heart a tremendous lift as well as a great sense of honour and pride.

It was a proud and poignant day coming fresh off the magnificent commemoration ceremony for the victims of Bloody Sunday in Croke Park the evening before.

The name of Michael Hogan is well known because of the Hogan Stand but through the commemoration ceremony the lives of the other 13 victims were also brought to the fore as we learned that the victims included ordinary men, women and children who had come to Croke Park to enjoy a challenge game between Tipperary and Dublin, which was happening in place of the All-Ireland Championship which was postponed due to the War of Independence.

True to their beliefs they made the game their priority and led by captain fantastic Conor Sweeney they took the game to Cork and never let up throughout the 70 minutes of play. I have rarely been as proud of a Tipperary team as I am writing this. I have followed Tipperary football through good times and bad, through the wind and through the rain and through the highs and lows.

Sunday was a day that will live long in the memory for history, for commemoration and most importantly for football. It’s important to remember all those who have made such a significant contribution to football in Tipperary over many years, many of whom are no longer with us.

The Friends of Tipperary Football have been instrumental in providing support for football in the county and deserve to be recognised at the highest level.

As a west Tipperary Gael, I have to mention Brian Fox from Eire Óg/Annacarty who contributed so much to the campaign and was one of the outstanding contributors to the Munster final.

I must also mention Tommy Toomey from Arravale Rovers, who has been in the backroom team this year and a past selector previously with the senior team, who has also made a major contribution to football in Tipperary.

That is not to take in any way from the contribution of all the others but it is important to recognise those within the West Division for their contribution.

The West Division has been a stronghold of football over many years and it is important to remember all those who have “fought the good fight” for football in Tipperary, including those who have not lived to see this historic day.

I have great admiration for David Power who since his appointment has been a calm and reasoned voice as manager of the Tipperary team.

He has united the voices of Tipperary under age teams in bringing in Tommy Toomey and Charlie McGeever and having someone like Dublin’s Paddy Christie in the backroom team has added great experience to their set up.

We hope that this is the beginning of a period of great success for football in the county, something that all football followers will certainly welcome.