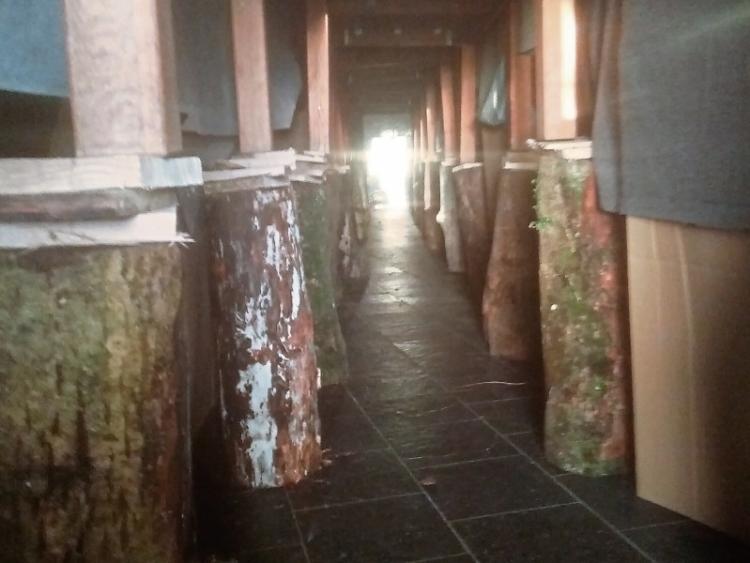 A newly built tunnel passageway at a Tipperary heritage centre delivered the winter solstice in all its glory.

The passageway aligned to the winter solstice sun was built at Carnhalla Heritage Centre near Cappawhite by the centre's owner Tom Coffey in early December.

Mr Coffey, who is a farmer, built the heritage centre as he owns more than 70 acres featuring 30 archaeological sites, scenic walking trails and woodland boasting the largest hazel and crab tree in Ireland.

Mr Coffey said he was prompted to create  the passagway as he observed over the past number of years, a shaft of sunlight entering the eastern window of his circular shaped heritage centre during the winter solstice and progressing 55 feet to a room in the western side of the building.

He built the 55ft long tunnel passageway 4ft high and 2.5 feet wide using ash logs from the farm that were covered by felt and blankets.  He quipped that it  was similar to Newgrange but obviously not as elaborate,

Mr Coffey and his  family witnessed the winter solstice magically creeping into the passageway and lighting up the back wall of the heritage centre at 9am on December 20. “It was an amazing event,”

he told The Nationalist.

Tom  believes there are  passage tombs underneath Carnhalla's ancient mounds that may even be much older than Newgrange.  Carnhalla was an important site in  ancient times as, like Newgrange, it was aligned to the winter solstice.

He says the winter solstice was a massive event for our ancient ancestors because  it represented the waning of one year and beginning of another.

“It was an ancient symbol of the fertilising rays of sunlight entering the passageway, and the womb of the earth, and green shoots emerging which was their survuval.”

He pointed out celebrations normally followed the Winter Solstice in ancient times, so his family held their own celebration on December 20.

“We had a neolithical meal of venison, berries, apple sauce, nuts and mead. I can thank my wife Joanne for placing the window in the right place in the heritage centre for the solstice with the help of our daughters Laura and Karen.”

Tom says his  family look forward to enjoying Newgrange at their home again next year.