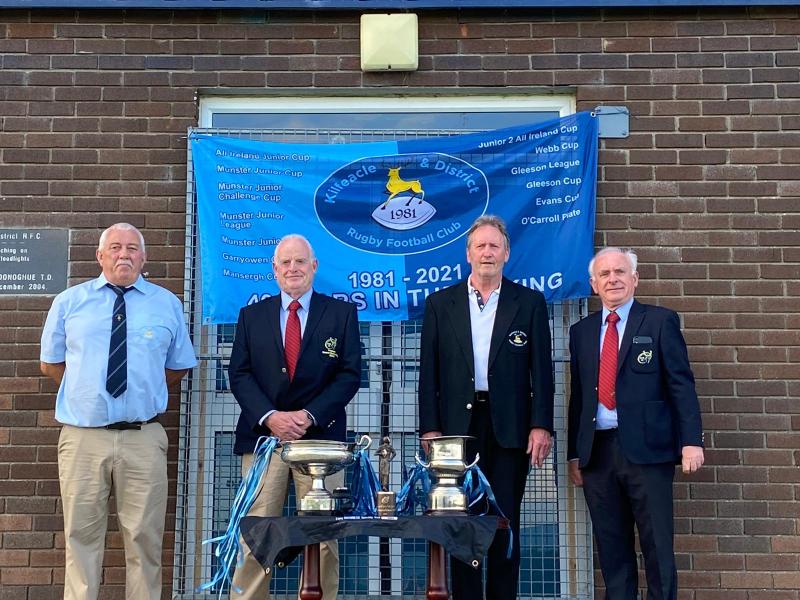 A great achievement for the Tipperary club

Since its formation in 1981 Kilfeacle & District Rugby Football Club has become one of the strongest and most consistent clubs in Munster Junior Rugby.

Situated four miles from Tipperary Town in the direction of Cashel, Kilfeacle and District RFC has fought hard to carve out its own place in the game. The club colours are sky blue and navy, which were chosen by Mrs Mary Cooney, a founding member, because she had a big devotion to the Blessed Virgin.

The most important part of the club name is 'and District', which caters for the diversity in area codes that players are drawn from. Everyone involved in 'The Hill', as the club is affectionately known, are bitten hard by the rugby bug.
It is a wonderful club to be associated with. Kilfeacle and District RFC is a hive of activity every weekend from September to May. On any given night it is no surprise to have approximately 150 players training from Under 8’s to seniors, and results speak volumes of their success.

The support structure from volunteers through parents, coaches, selectors, patrons and supporters is immense and something the club is very proud of.

Special mention must go to all our coaches for their tireless, selfless work in developing the youngsters and the talent that permeates through the different teams that wear the Blue for the Little Club on the Hill. The club has been in the top division of the Munster Junior league every year since its inception. This consistency is even the more impressive considering the position and role of small clubs such as Kilfeacle & District within the current landscape of modern-day professional rugby in Ireland.

Small clubs such as Kilfeacle & District have to contend with being a feeder club, staging area and stepping-stone for talented players making their way up and down to and from senior clubs and hopefully the heady heights of professional rugby.
Proudest Achievement

One of Kilfeacle & District’s proudest achievements is to still be able to compete at its current level despite the challenges of player retention in today’s climate with every player that shows promise or skill being courted by numerous clubs at higher levels. The club’s success can be credited to the loyalty shown by players and supporters alike down through the years.
Fortunately, in Kilfeacle & District, what may be lacking financially and materialistically is more than made up for in loyalty.

Loyalty shown by the players to the club, club to the players, coaches to the club, parents and supporters to the club….the list goes on. Everyone associated with Kilfeacle from Chairperson to tea lady, from first team captain to under six substitute are loyal supporters of Kilfeacle & District RFC and would follow them to the ends of the earth and even further to support the ‘Boys in Blue’.

As a club we are now 40 years young. We are still a small club but in many ways that is our greatest asset. We are a community-based club and a tightly knit family. It is this sense of family and community, sense of belonging, sense of being an integral part of something, sense of loyalty that has kept this club in existence in the past and hopefully in the future.
The club has had many successes over the years including the coveted Munster Junior Cup which was claimed in 2002. Kilfeacle & District has at some stage won nearly every competition that it has entered at least once and is delighted with its long list of accomplishments
These achievements are magnified when you take into consideration the players that make up the squad and their links to the club. Most of the players have played their way through the juvenile ranks, some are playing or have played with their brothers in Kilfeacle’s firsts. Many are following in the footsteps of brothers, cousins, uncles and fathers by pulling on the sky blue and navy colours of Kilfeacle.

Some are sons and grandsons of the club’s founding members. Many have family members actively working in the club as coaches, committee members, volunteers, sponsors, patrons, etc… The large amount of people that travel to cheer this club on are not just supporters. They are family members, partners, friends and loved ones. That scream, cheer, encourage and shout until hoarse. Not because they wish that the club could gain recognition. No, because by being a member of Kilfeacle and District RFC they know that the club deserve to be recognised because of all the effort that so many have put in.
Every squad member, to a man, has gone above and beyond what was asked of them. To be recognised as Junior Club of the Year 2020 was a complete club achievement.

The winners of the 2020 Munster Rugby Awards were announced online across Munster Rugby channels on the 2nd November 2020 with 11 individuals/clubs recognised for their achievements throughout the 2019/20 season.

2019/20 was a particularly special season for the Tipperary club, as they completed a unique double by winning both the All-Ireland Junior Cup and the Munster Junior League Division 1 title. On the back of this success, they were invited to participate in this season’s Bank of Ireland Munster Senior Challenge Cup where they defeated Bruff RFC in the opening round, before eventually bowing out to Shannon RFC. Another very exciting season lay ahead or so we thought…..

While adhering to socially distancing guidelines both Séan and Ger were given a tour of Kilfeacle and District’s ever improving facilities. Club rugby in Ireland may have been in lockdown, but behind the scenes a series of improvements and initiatives have been taking place that will improve ‘the little club on the hill’ for all involved.

Clubs like Kilfeacle and District are the grass-roots of the game and play a vital role in the future of rugby in Ireland. These improvements and initiatives are only made possible by the continued support from our members and sponsors. The community around ‘the little club on the hill’ is tightly knit and supports and helps organise many successful fundraisers.
We are now a number of years on from introducing our very successful split the bucket draw and we would like to send our heartiest thanks to all who continue to supports us each week. To the pubs, shops and people who continue sell our tickets weekly a massive thanks and to all who purchase tickets weekly this draw would not be a success if it was not for your support.

For anyone who has not been at the club house for a while you will see many improvements, we have been able to achieve thanks to this money raised. We put in a fabulous new bar and kitchen upstairs, upgraded the gym and windows, painted all downstairs during the summer months, put in a new walkway and railing around the main pitch allowing parents to walk round the pitch while training is on, we power hosed and painted the outside of the club house while our grounds people continue to keep the grass, pitches and hedges in pristine condition.

And just this week we completed a major repair/upgrade of our light systems, plus many more improvements. Kilfeacle and District RFC, with the continued support of all involved, will continue to keep upgrading our facilities and grounds thanks to the bucket.

When COVID restrictions are lifted and competitions resume we hope to continue in the manner in which we stopped, that is to be an inclusive community-based club that strives to be the best in can both on and off the pitch.