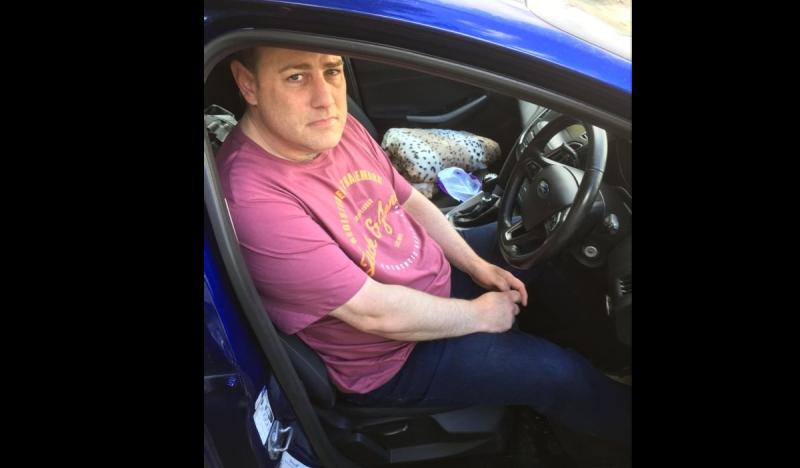 The accommodation crisis in Ireland is not something new.

A report from the Simon Communities of Ireland, published in the first quarter of 2022, shows a 92% drop in the number of affordable houses since June 2021, when there were 906 properties available.

The report also shows that limited properties were available for people receiving the Housing Assistance Payment (HAP) to rent across 16 areas of the country.

We hear reports about the housing crisis fairly regularly but when you hear a report of a person from your own town living in his car it suddenly brings the matter to your own doorstep.

When this was reported to me I undertook to make contact with the person to learn more about his story.

44-year-old Peter Scanlon was formerly resident at Garryskillane in Tipperary Town but is currently of no fixed abode so I met him at the home of his friend in the town.

Peter presented as a very capable young man who seems to have “fallen through the cracks” and now feels completely abandoned by just about everyone.

He has documented everything that has happened to him since 2019 particularly when his adopted father passed away, to the present day, and gives a full account of his interaction with the various services and with those who would be deemed to be responsible for his care.

Peter makes no secret of the fact that he has a multitude of physical health problems and that he suffers with significant mental health issues.

However the fact that he is currently of no fixed abode, and literally living out of his car, is serving to impact very negatively on his mental wellbeing due to the stress that it is causing him.

In speaking with Peter he was very measured in his account of his situation and provided me with personal correspondence and information relevant to his story in order to confirm what he was saying.

It is clear from seeing this information that Peter has some pressing medical needs and the likelihood is that some of these would have already been carried out had he a regular fixed residence/ home.

He is awaiting a procedure on his neck and according to a medical report which he showed me, he remains very vulnerable in respect of this.

The report says that were he to injure his neck in a fall or accident, that it would put him at risk of a spinal injury.

Peter is also very open about his mental health issues and he is under the care of the psychiatric services and of a consultant psychiatrist, and he also meets many of the criteria, which according to his GP, suggest a diagnosis of Adult Autism. Peter clearly feels that because of his mental health issues that he may be viewed by some as a dangerous person but says that this is completely wrong and is very far from the truth.

“I studied Social Care in Athlone Institute of Technology from 2014-2018 and I have an award of Higher Certificate in Arts and Bachelor of Arts in Applied Social Studies in Social Care.

“My world changed drastically when my adopted father passed away in February 2019. He was my only true friend and support in life and without him I have been completely lost. After my Dad passed away I started to have ‘meltdowns’ and since then I have been dealing with mental health issues and a terrible sense of loss.

“I never knew my birth father as I was adopted when I was two-weeks-old so my adopted Dad was the only father I ever knew and I have never gotten over his loss.

“I have had a lot of support along the way but now I feel completely abandoned by all the services. I am estranged from my other adopted family members and all I want is a home of my own where I can try and build a life for myself again,” said Peter.

Following the death of his adopted father, Peter changed his surname back from his adopted name of Crosse to his birth name of Scanlon.

He says that this may have upset some of his adopted family but that he was searching for his own identity and that it was something that he needed to do and wasn’t meant to be disrespectful in any way to his adopted family.

Peter’s story from 2019 to the present, of moving from place to place, in and out of care facilities, shelters and other accommodation services, and then to living in his car, makes for harrowing reading.

It tells a story of a person who is desperately in need of support and of an environment where he will feel safe.

He is approved for the Housing Assistance Payment and has been told to look for accommodation within and outside the county. To date he has applied to nearly 100 properties in Ireland with no success.

“I have travelled out of desperation to as far away as Mayo and Roscommon in seeking a place to live. I am approved for HAP and I am still homeless. My only possession in the whole world is my car. All I want is a small place to call home and where I will be safe,” he said.

He has had an offer of tenancy for a flat in Clonmel but says that he refused it because after viewing the place he felt that it did not meet his physical needs taking his current diagnosis into account and also his mental health needs.

“I was informed in writing that I was allowed two refusals but now the council have ceased my payment for a B&B because I refused the tenancy in Clonmel. I am told that I also refused a place in Borrisokane but that is not correct as there was no offer made to me of a place there and I have all the documentation to prove that. I have complied with all requests made of me by the council and I can’t be put into a property which is not suitable for me and could prove fatal for my physical and mental health,” said Peter.

What is certain is that Peter would be most happy to be in his home town of Tipperary where his GP is based and where he has access to the great facilities in the Canon Hayes Recreation Centre, which is so important for his wellbeing.

In the meantime, Peter continues to use his car as his home and to grab a few hours sleep at night in a local petrol station. It makes you thankful for having a roof over your head and a comfortable bed to sleep in at night.

Peter’s story and this article were sent to the council for a response and in a statement, the local authority said: "The council, as a policy, does not discuss individual cases.

"However the council has no issue outlining the general processes involved in dealing with those who are homeless and who have particular vulnerabilities.

"We work, in collaboration with other stakeholders, to provide a number of supported accommodation units either through the provision of Housing First units (16 provided to date) or through various programmes we support for tenants suffering with mental health issues (eg START and NTISS).

"However, it is expected that individuals, when in emergency accommodation, will work positively with the council to access more permanent accommodation.

"Council staff meet with and support many individuals and families on a daily basis who have tragic backgrounds and face very many challenging circumstances. We seek to deal with all sympathetically and professionally and do all we can to meet their needs.

"But there is also a responsibility on all individuals to work with us in a realistic manner and to realise that the council also has limitations in terms of its stock numbers, stock location and stock type at any given time."