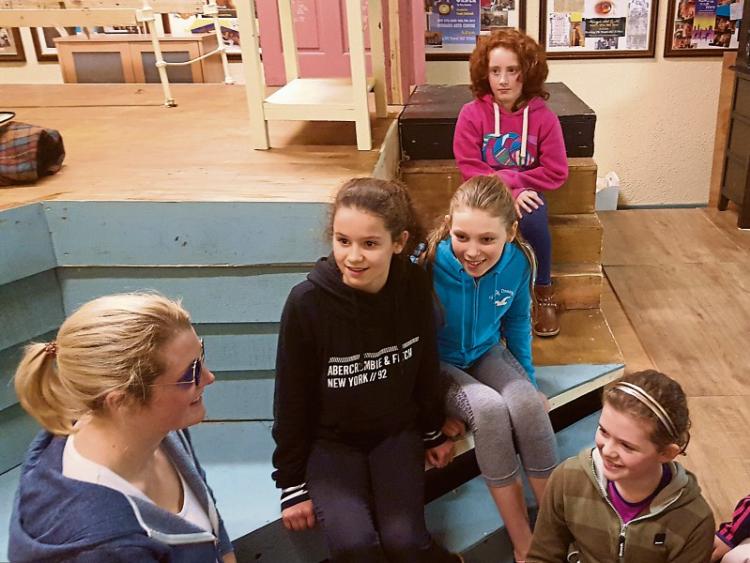 Rehearsals are in full swing for the up-coming Nenagh Players' production of William Gibson’s beautifully-penned play 'The Miracle Worker'.

The play tells the story of Helen Keller and the ground -breaking work carried out by her teacher, Annie Sullivan, an Irish American who revolutionized the way both blind and deaf children were taught language. Indeed, Anni's legacy persists to this very day.

With a cast of sixteen and a challenging set to construct, this production brings out the best in all that the Nenagh Players have to offer.

Directed by Kevin Walshe, who also plays Captain Keller, this play will have you totally engrossed from start to finish.

With some established actors such as Margaret Walshe, who plays the dutiful but strong Aunt Ev, and Heather Broad, who brilliantly plays the broken-hearted mother at her wits end to try and do the right thing for her troubled daughter, Helen.

Helen is played by Katie Grace - Katie is just thirteen years of age and delivers such a commanding performance that you will leave the show marking her down as one to watch out for in the future.

Katie's foil in the development of the story of the battle of wits is Kirsty Burns, who plays Helen’s teacher Annie Sullivan, who is taking on her biggest roll ever with the Nenagh Players.

To witness both the turmoil and affection shown by these actors, in what turns out to be a volatile yet loving relationship, will have you waiting with anticipation as to what will unfold next.

Complementing the cast is a group of young players who convincingly play blind children at Annie's old school and new home which will touch your heart with their convincing portrayal of waif -like blind children growing up in the southern state of Alabama.

Making up the rest of the cast is Lisa McGeeney who is making a welcome return to the Nenagh stage as she captures her character, Viney the opinionated maid, with great understanding.

Completing the cast is Stuart Andrew, who plays the doctor, and Kevin Whelan, who plays Annie's tutor Anagos.

William Casey-Boyle plays Helen’s brother, who is initially indifferent toward his sister yet this soon changes to frustration as the play progresses - another well-considered portrayal by a talented young actor.

The play will run for two nights in the Nenagh Arts Centre on February, Wednesday 17th and Thursday 18th at 8pm.

Following on from the run at the Nenagh Arts Centre the Nenagh Players will embark on the festival competition circuit which begins with the play performing in Rush (County Dublin) on Saturday, February 20th.

In all a total of seven venues will be visited as the Nenagh Players seek out a cherished place in the All-Ireland Drama Finals.

Only four of this cast have performed on the festival circuit previously - the cast is anticipating an exciting adventure as they embark on this journey which hopefully will bear the fruits which it thoroughly deserves.

The Nenagh Players committee would like to extend their thanks to the parents, whose sons and daughters play an integral part in the production and without their co-operation this play could not have come to fruition.

Tickets for 'The Miracle Worker' are available to buy from the Nenagh Arts Centre and booking is advisable as the play is running for two nights only.

Please call the arts centre box office on 067 34400 or alternatively you can visit nenagharts.com.

As always the Nenagh Players appreciate all support from the people of Nenagh and the surrounding areas.

The Nenagh Players would like to wish fellow Tipperary groups - Thurles Drama Group and the Holycross-Ballycahill Players - who will also be competing on the festival circuit all the very best of luck on their respective journeys.