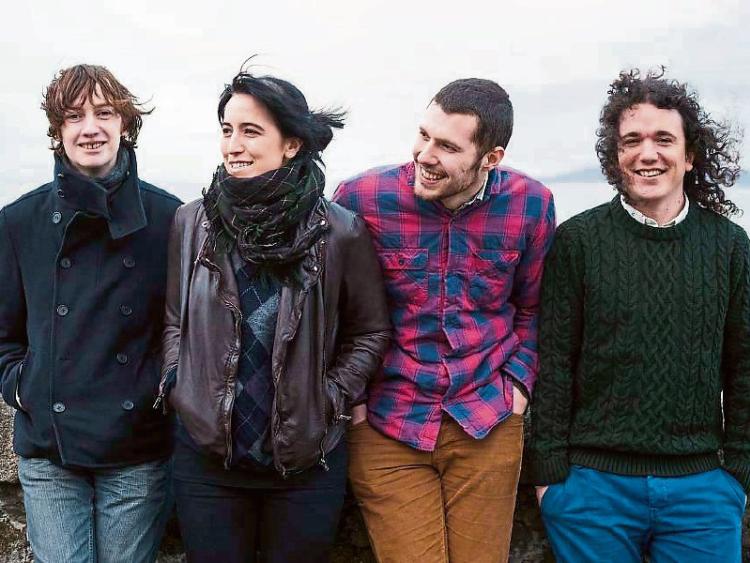 Hailing from County Sligo Old Hannah are a foursome schooled in the deep-rooted discipline of folk, country and roots music. Their music weaves lapsteel, banjo, mandolin, guitar, piano and beautifully arranged vocals into songs that are at once contemporary and filled with the lore of generations past.

Old Hannah are a four-piece band made up of Luke Mercer, Anthony Mannion, Lucie Crichlow and Leo Morris. Their blend of traditional and contemporary music influences reveals a unique country-roots sound which transcends geography and generations.

The band's latest release, the 'Iron and Wood' EP was recorded with Rian Trench of Solar Bears, and the band are joined by several guest musicians including Steve Wickham of The Waterboys.

This bold and transformative follow up to their debut EP Irish Boys displays a leap in creativity and calibre which establishes Old Hannah as a unique n​ew force on the Irish music scene, and the coinciding tour for that EP culminated with a performance on RTÉ's 'Saturday Night Show'.

The EP of original material displays a confidence in their song-writing and musical arrangements. The band have crafted stories and melodies which display both a strength and energy that sit well alongside their good humour on stage.

Old Hannah have gained significant ground in Ireland over the past two years. They have had live performances on RTÉ Radio 1 along with various radio plays. The band were also invited to perform on the RTÉ 'Big Music Week Train', the 'TwoTube Sessions' and TG4’s 'Ceol ar an Imeall'. Indeed, Old Hannah have made themselves known on the Irish festival and touring circuit performing at the likes of Electric Picnic, Castlepalooza, Knockanstockan , Forbidden Fruit, Body & Soul, Other Voices, The Hard Working Class Heroes festival in Dublin and Sligo Live. The band have also played at Aras An Uachtarain, supported Sheryl Crow have shared the stage with Lisa Hannigan. Old Hannah are easily one of the best Irish Americana bands around at present.

Clonmel World Music is proud to present Old Hannah at the Raheen House Hotel in Clonmel on Friday, March 11th. Doors for the gig will open at 8pm. There will be no support act and the band will start at 9pm prompt. Tickets are available in Premier Music Centre in Clonmel on 052 612 9811, from Gerry Lawless on 086 338 9619, and from Martha Beardmore on 087 910 7201.

The Fionn MacCumhaill Players from Cloneen are on tour once again and are staging their upcoming production of 'The Country Boy' by John Murphy in The Source Arts Centre in Thurles on Saturday, March 5th at 8pm. To book your ticket please call the box office on 050490204.

The Fionn MacCumhaill Players will also stage 'The Country Boy' in the Mullinahone Community Hall on Friday, March 11th at 8pm. To book your tickets please call 086 083 4208.

Finally, Clonacody House in Fethard will host an intimate performance of 'The Country Boy' on Tuesday, March 15th and on Wednesday, March 16th with food served. For tickets please call 086 083 4208.

This is a great play and a good night out is guaranteed. Don't miss it!