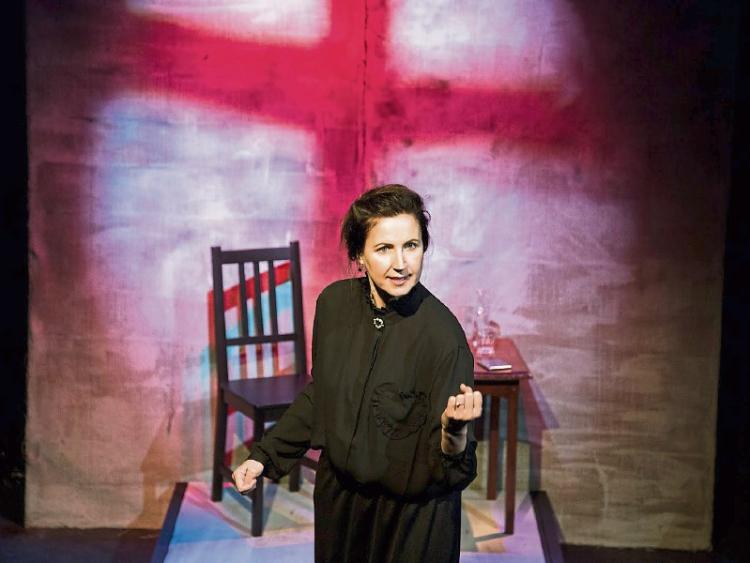 Patrick Marber is an award -winning playwright and screenwriter who has won three awards for his stage play 'Closer' - including the Laurence Oliver Award for Best New Play and the New York Drama Critics’ Circle Award for Best Foreign Play - while his screenplay 'Notes of a Scandal' won best screenplay at the British Independent Film Awards and was also nominated for a BAFTA and an Academy Award.

'After Miss Julie' portrays the complex relationship between chauffeur John (Ciaran McMenamin) and the lady of the house Julie (Lisa Dwyer Hogg). The ill-fated pair are caught up in a lustful tryst one evening which ultimately seals their fate.

The play focuses on the struggle of power between Julie and John displayed through their dominating characters and physical relationship with one another.

The central themes of the play revolve around gender politics and class, which plays an important part in shaping the characters irrational decisions, ultimately determining a tragic end.

Both character’s moral foundations are repeatedly disrupted once John’s fiancée Christine, played by Pauline Hutton, is introduced to the love affair.

What seems like a simple one-night affair develops into a complex chain of events that will fascinate audiences.

Ciaran McMenamin, Lisa Dywer Hogg and Pauline Hutton are all experienced and established actors on both stage and film - all three careers have featured exceptional stage performances. Mean while Emma Jordan is a critically-acclaimed director and this production comes hot on the heels of her acclaimed production of Stacey Gregg’s 'Scorch'.

Don't miss 'After Miss Julie' at The Source Arts Centre in Thurles on Tuesday, March 22nd at 8pm.

Madame de Markievicz was an unusual figure - she born Constance Georgine Gore-Booth and lived in Lissadell House in the north of County Sligo. She later rejected her Anglo-Irish upbringing and got involved in nationalist politics and the 1916 rising. During the rising she was appointed second-in-command to Michael Mallin in St Stephen’s Green. She was involved in the murder of Police Constable Lahiff , a 23-year-old man from Clare who was unarmed at the time of the attack.

This play sets out to dramatise the events of her trial for the murder of the police constable. It is set in a courtroom and a prison cell during the autumn of 1917 and the dialogue is largely based on the actual extensive speeches made by Markievicz during this time.

The play has a cast of six actors - Barbara Dempsey as Madame de Markievicz and Neill Fleming as the Prosecutor. Apart from the prosecutor, all the characters are based on actual people and each one is impressive in their strength of character. William May, the prosecutor and sole fictional character in the drama, is the Devil’s Advocate. He trawls through all aspects of Madame’s life and times, from her birth to 1917, to challenge the misinformation created by post-1916 here say. Completing the cast are Amy O'Dwyer, Andrea Kelly, Siofra O'Meara and Ian Meehan.

The testimonies of the witnesses, including Dr Kathleen Lynn, Helena Molony, Margaret Skinnider, Geraldine Fitzgerald and William O’Brien of the ITGWU, are interwoven to show that Constance de Markievicz was a normal multi-dimensional woman in contrast to the usual one-dimensional icon frequently presented.

The audience will be the ultimate judge, because the conclusion of this remarkable production enables the audience to decide the final verdict, innocent or guilty.

'Madame de Markievicz on Trial' is written by Ann Matthews and directed by Anthony Fox and will feature at The Source Arts Centre in Thurles on Wednesday, April 13th at 2pm.

For all bookings and enquiries please call The Source Arts Centre box office on 0504 90204 (Tuesday to Friday 10am to 5pm, Saturday 2-5pm) or you can book online at www.thesourceartscentre.ie.