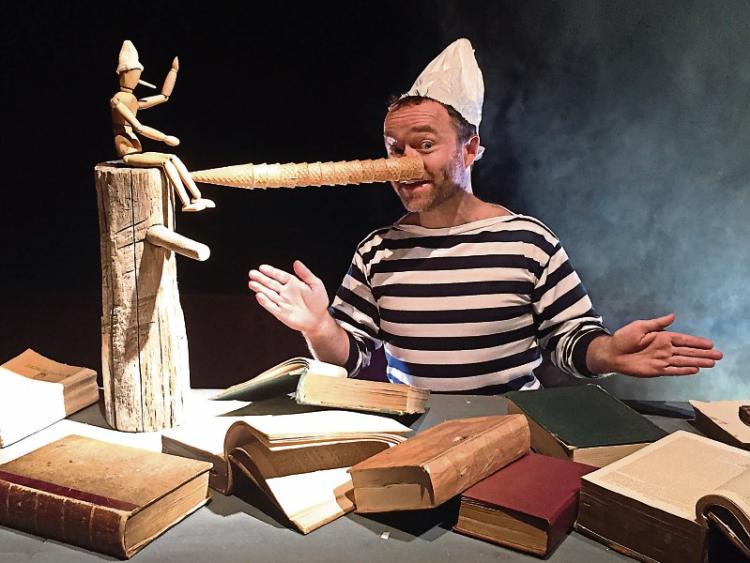 Lyngo Theatre presents 'The Curious Adventures of Pinnochio' at The Source Arts Centre in Thurles on Saturday, May 21st (3pm).

In 'The Curious Adventures of Pinnochio' one of the best loved children’s classics comes to life, literally!

Crickets, cats, foxes and, of course, the world-famous puppet springs out of a collection of dusty, old, magic books.

Patrick Lynch, from ‘CBeebies’, pulls all the strings and turns all the pages to bring you the true story of Pinocchio, no lie. Who ‘nose’? He might even find his father and become a real boy. Why not come and join him on his incredible journey, you will have a whale of a time!

Lyngo Theatre are superb -they create a stunning wonderland for little ones to become transfixed by.

Performed by writer director Patrick Lynch, this show has a beautiful set, with lovely puppet characters and delightful especially created music that will appeal to children from the ages of four and upwards.

This is Lyngo Theatre’s third time back to perform at The Source Arts Centre.

Each year, and without fail, a magical and quality production has wowed audiences young and old. The show comes highly recommended.

'The Curious Adventures of Pinnochio' will feature at The Source Arts Centre in Thurles on Saturday, May 21st at 3pm.

Singing sensations The Willoughby Brothers return to Brú Ború, Cashel for a concert on Friday, May 13th at 8pm.

Following their previous sell-out shows the Wicklow brothers - Richie, Des, Sammy, Robbie, Johnny and Jerome - are looking forward to performing in Cashel as part of their Irish Tour.

The group are currently recording their fourth studio album which will be released in the coming months and they are also planning a live DVD recording. Indeed. The Willoughby Brothers are currently in discussions with a prominent US network regarding a TV Special.

In recent months the brothers have made a big impression on the international music scene particularly in the US having completed a number of tours which proved very popular with American audiences.

The group's passion for singing and performing combined with a genuine closeness which is very clear to see in their live shows, stems from a childhood filled with music and singing, a love they carried with them through the years into adulthood.

Credit must be given to their father Richard and their late mother Breda for nurturing and encouraging these gifts from an early age and introducing them to a world of music and entertainment.

Their performing highlights to date include their live performance of the title song at the 2013 Rose of Tralee International Festival before a TV audience of 1.2 million and in 2012 The Willoughby brothers had the honour of singing in Croke Park for the All-Ireland hurling final between Kilkenny and Galway. The group have also appeared on a number of other television and radio shows including RTE’s ‘Up For The Match', 'The Derek Mooney Show', 'The Marty Morrissey Show' and the 'John Murray Show' on RTERadio 1. The group have also performed at the GAA Ladies All-Star Awards and the National GAA Handball Awards.

Not only do the brothers share a love of singing, but they also have a passion for Gaelic games, handball in particular. They all impressively hold All-Ireland handball medals while four of them - Richie, Johnny, Robbie and Sammy - are world handball champions.

Audiences of a Willoughby Brothers show can expect to be treated to an evening of music featuring a blend of Irish ballads, popular classics and contemporary songs including the hit song ’Where The Blarney Roses Grow’.

The group's intricate and melodic harmonies are what makes this show stand out. Indeed, this show will have something for all lovers of music and will take the audience on an emotive musical journey.