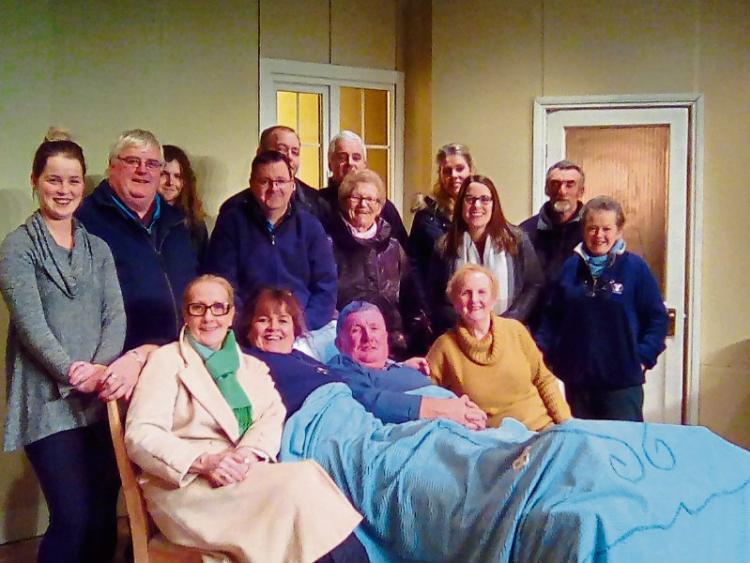 Holycross/Ballycahill Drama Group will stage ‘A Wake in the West’ by Michael J. Ginnelly on Friday and Saturday next in the Community Centre in Holycross.

Set in a small fishing village in the West of Ireland during the 1970’s it tells the story of the life and now the death of Tom Healy, a man who was fond of the drink and in the end ‘it was probably the drink that killed him’.

Tom’s last wish, and a humiliating one at that for his family is that he be cremated and his ashes scattered at sea. This dying wish torments his family and the hilarious scenes that follow are brought to life by the cast of Holycross/Ballycahill Drama group.

Our Christmas play is a vital part of our group, it is a chance to welcome new members, have a laugh and raise some much needed funds for our upcoming Festival play, our large cast this year includes New and ‘more seasoned’ actors’.

Our director is Geraldine Henchion, an award winning actress herself, is no stranger to the stage or indeed to directing. Geraldine’s daughter Aisling, our star find last year is once again showcasing her talent on stage.

Aisling, a young mum with two small children, enjoys the social outlet drama gives her. She plays Joan, a young neighbour with a close relationship to the deceased and his family. Gerry O’Dwyer plays Dr. John who is entrusted with the job of revealing to the family their fathers last wishes, but how competent is the good doctor? Gerry as always is enthusiastic in his performance.

Mary, daughter of the deceased is played by Miriam Lanigan- it is Miriam’s first time on stage but not her first time with us, she helped us reach the All Ireland last year operating our sound system. She is indeed multi talented and a natural as is her father Tommy Lanigan who is proud to act alongside his daughter. This year, Tommy plays Fr. Cassidy and as usual brings his sense of humour and a calmness to everyone on stage.

Marty O’Neill is the prodigal son Martin who comes home from America for his father’s funeral but who has unfinished business with Joan. Marty is a long standing member of our group with many acting and directing awards under his belt.

Almost every village has a Barney ‘just because he’s the village drunk doesn’t mean he’s the village eejit’ our Barney is played by John Glasheen who is a member of Drom & Inch Drama group for over ten years and has acted in numerous plays, ‘Troubled Bachelors, Mother Knows Best’ and many more. John is a great addition to our team and we are thrilled he’s chosen to act with us again this year.

The force that is Diane Lacey is once again taking to the stage -she plays Margaret, concerned neighbour and long suffering wife of Barney, Diane brings an energy to the stage that is unique and a joy to watch and no local play would be complete without her involvement.

Our nosey neighbour Rose is played by Evelyn O’Regan, a Moycarkey woman who made her stage debut with us last year and who is better known as a solo singer in the Moycarkey Choir. She is also a past member of the Tipperary Singers and the Cashel Pantomine Society.

The main man in the play, the corpse is none other than Andy Slattery, a man who needs no introduction and who is better known in recent years as a set designer and builder - if you can imagine it, Andy can build it!

He is invaluable to the group and definitely playing the most difficult part in the show, it will be a feat in itself to keep a straight face while the cast around him get up to all sorts of fun and divilment.

Lighting the play we have Paddy Connolly, as usual we depend our lives on Paddy to make sure everyone is seen at their best and that the audience is not left in the dark. Dean O’Neill is our ‘sound’ man, his second year to do so and hopefully many more to come. Our stage manager is Jacqui Lacey, taking time out from her Festival rehearsals and also in the wings is Sally O’Rourke making sure everything runs according to plan.

We are on stage on Friday 9th and Saturday 10th of December in Holycross Community centre at 8.30pm. Admission is €10 for Adults. Teas served at interval. A play suitable for the whole family, please come along and support us and enjoy a great nights entertainment.